Essaouira is a harbor town with about 85,000 inhabitants. The old town (medina) is part of the UNESCO World Heritage and to me, one of the places most worth visiting in Morocco – but let´s talk about our arrival first: 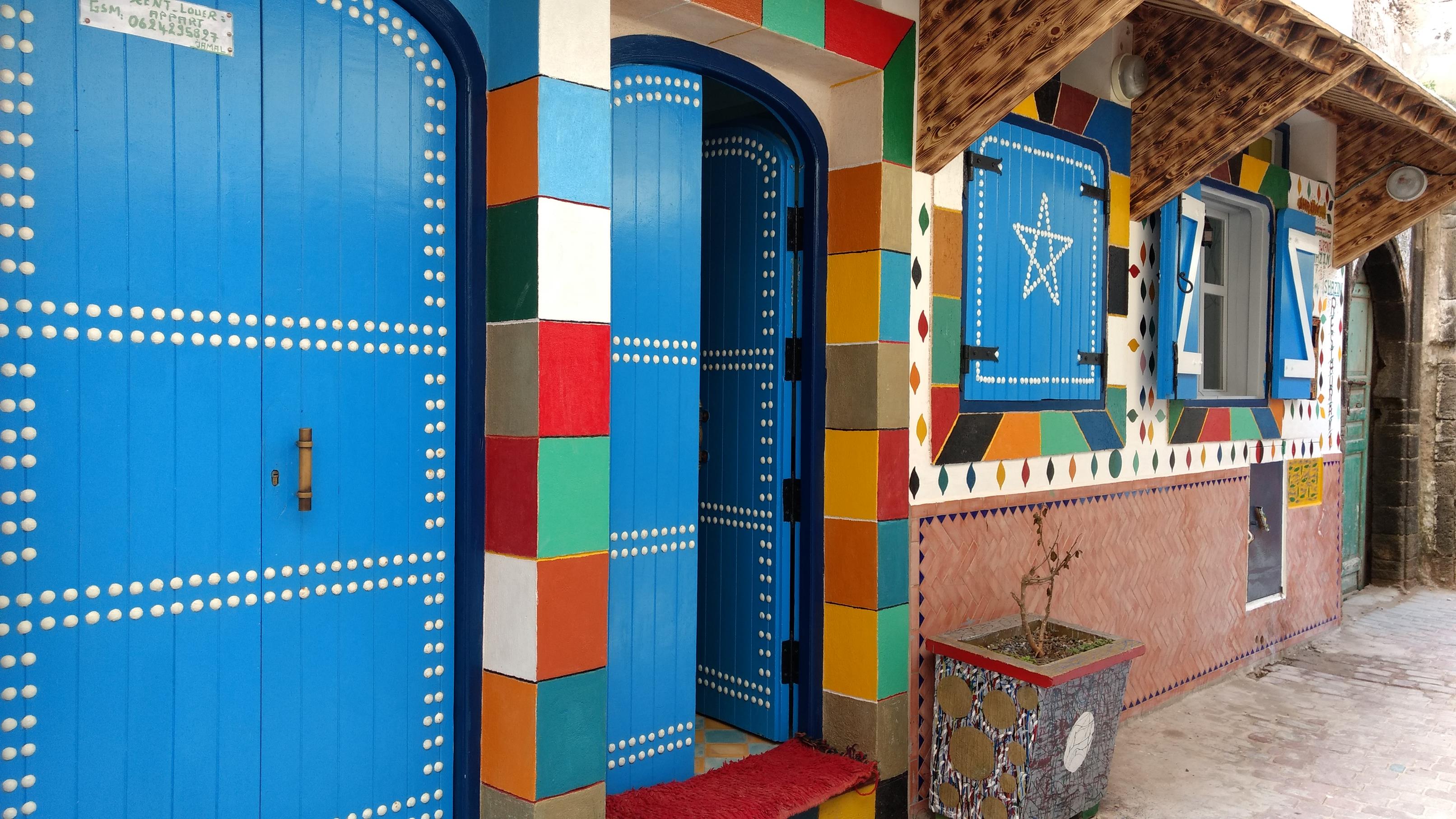 We arrived in Essaouira by bus and got off at the station. I asked a local about the way to the medina, where we had a hotel reservation. I got a simple answer: “Just follow the sun!” No sooner said than done! We started walking and got tremendously lost in the city. After walking past the same salesman a few times, he stopped me and asked if we needed help. I explained the situation and told him the name of our accommodation.

Drinking tea in the old town 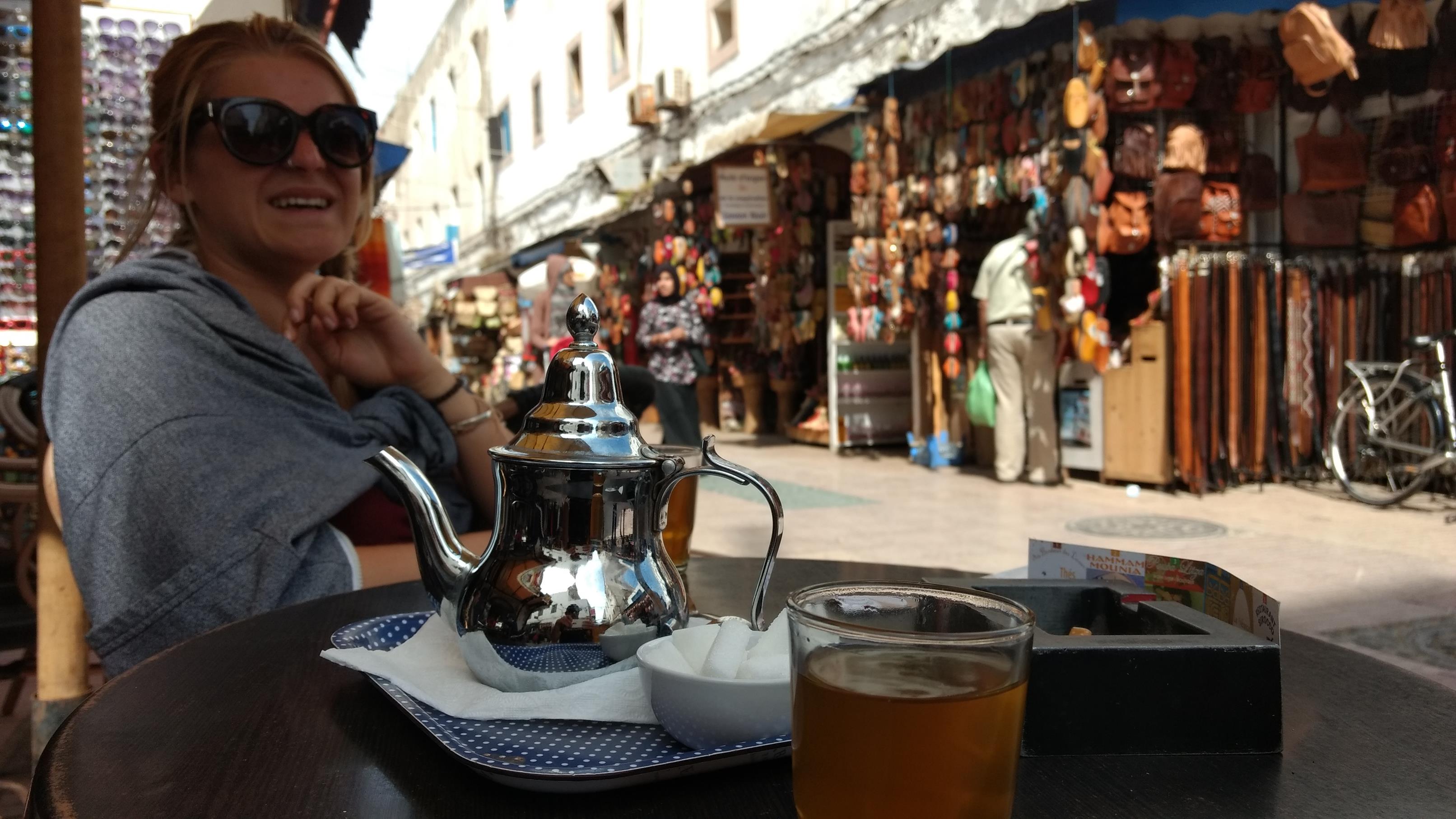 In less than two minutes a crowd of Moroccans had formed. Everybody was loudly discussing where this hotel was in Arabic. In total, there were eight men wildly gesticulating, even stopping a motorcyclists  and making phone calls. That was jaw-dropping, as I had never experienced such hospitality before. After some time, a local guided us to our destination. As usual in Morocco, a small donation of money is given in connection with the services provided. He had definitely earned it. Without him, we would have never found the hotel in the countless small alleys. 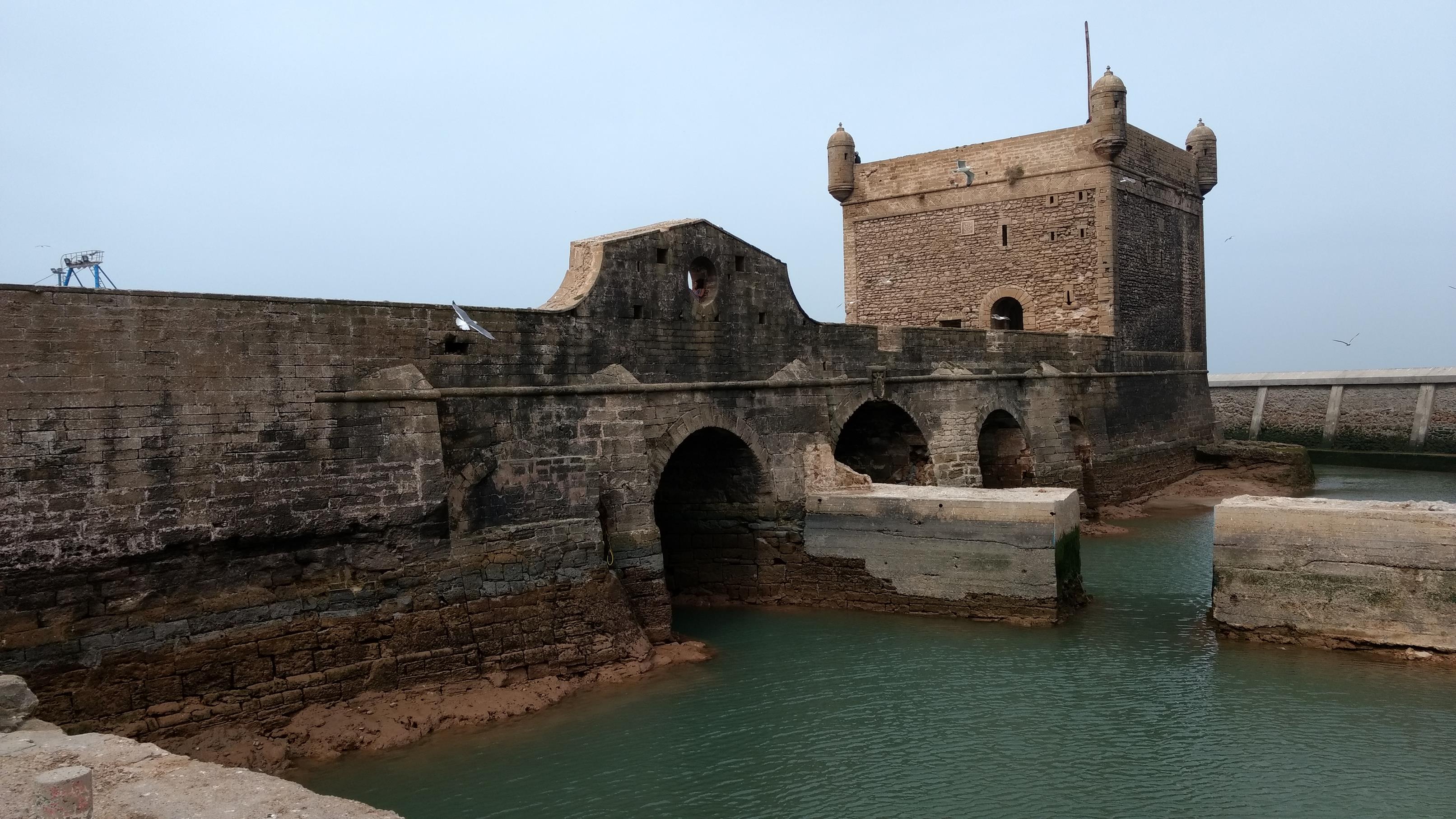 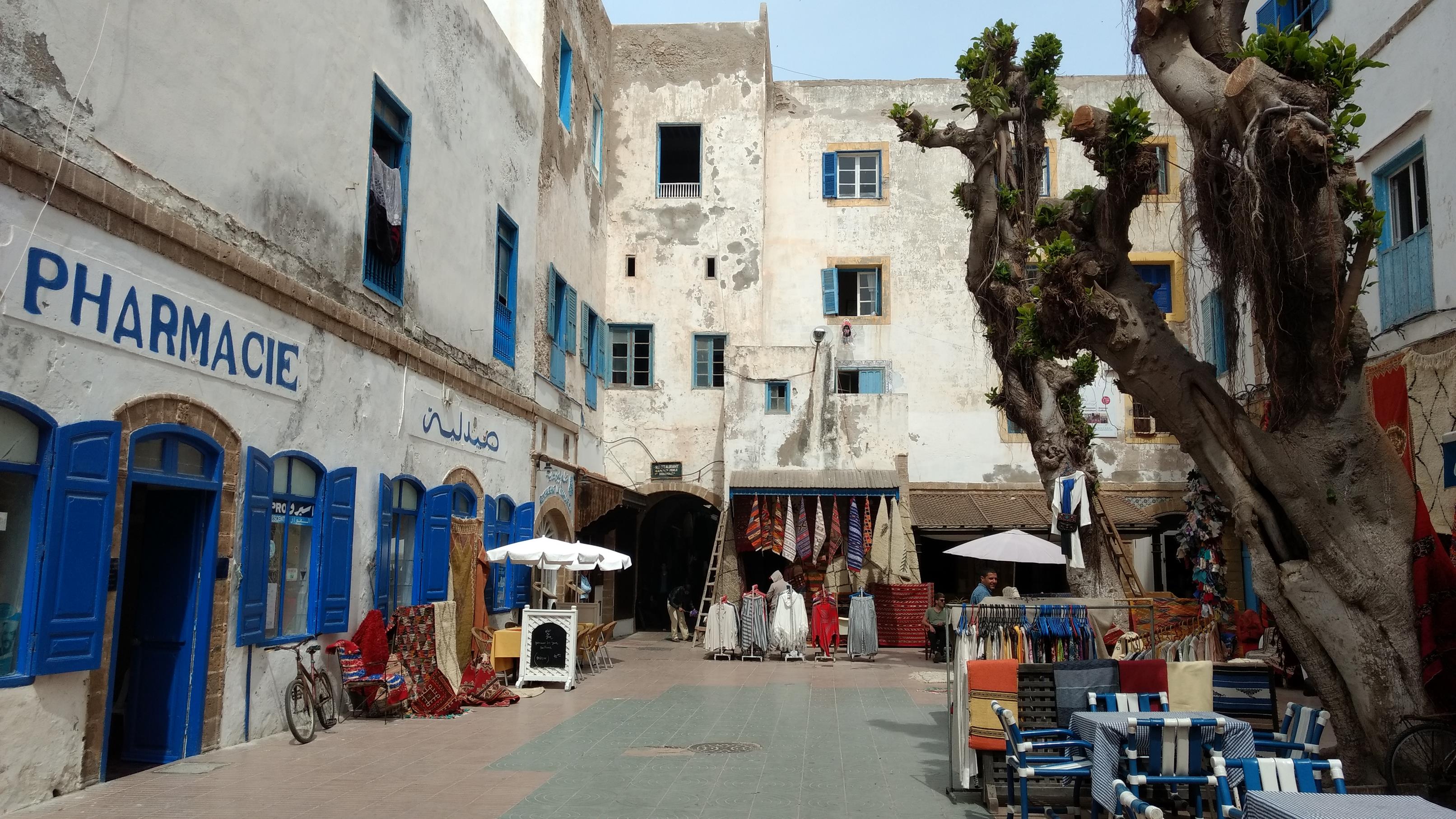 At first, the medina seems extremely contorted and unmanageable, but after a few days (we stayed one week) you know the streets and get around easily. It is also the “simplest” medina of all cities we visited. Essaouira has not too much to offer for tourists – except for an old Portuguese fortress (that served as a shooting location for Game of Thrones), a few museums and galleries and of course the beach.

Some snapshots from the old town 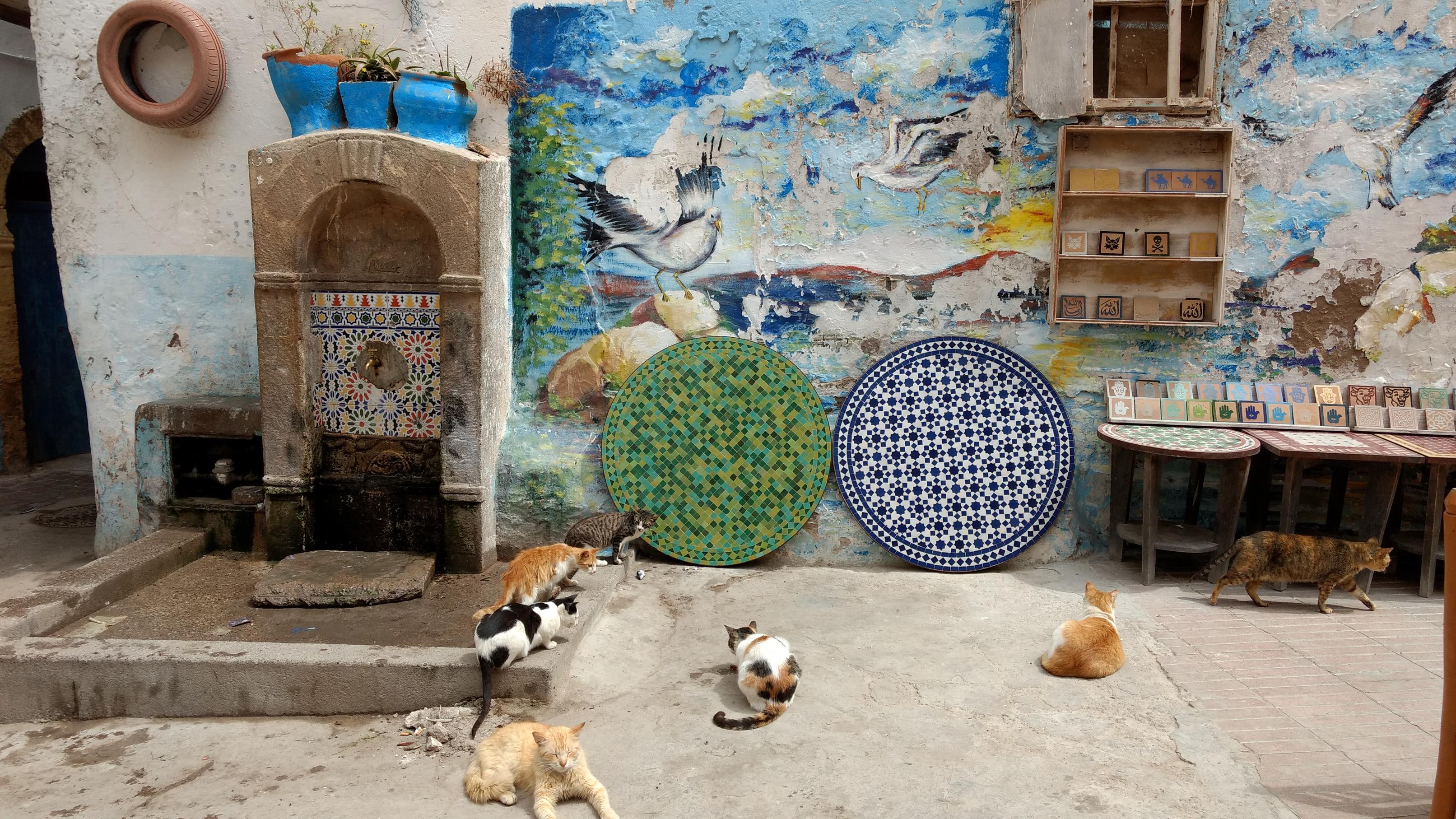 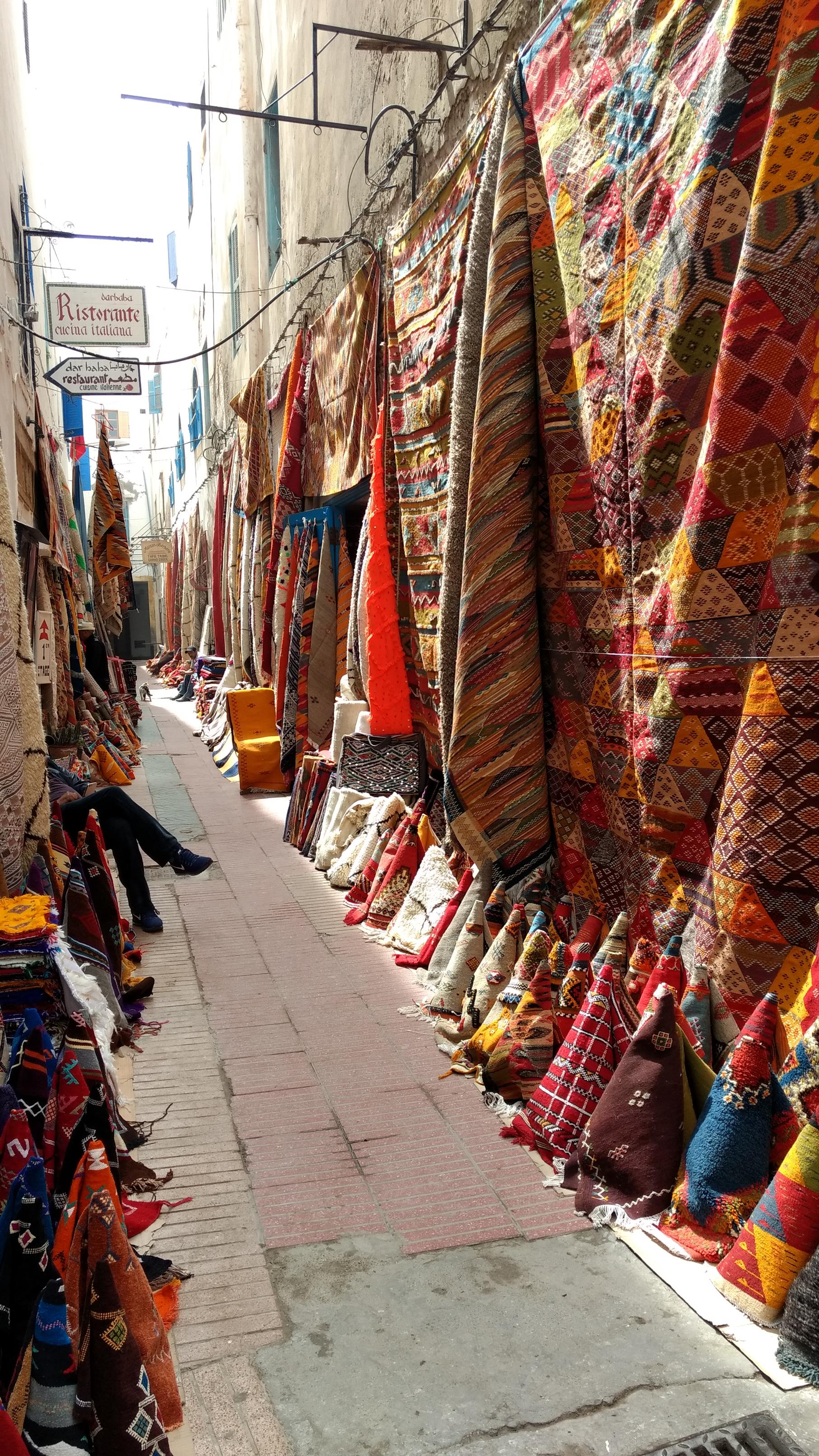 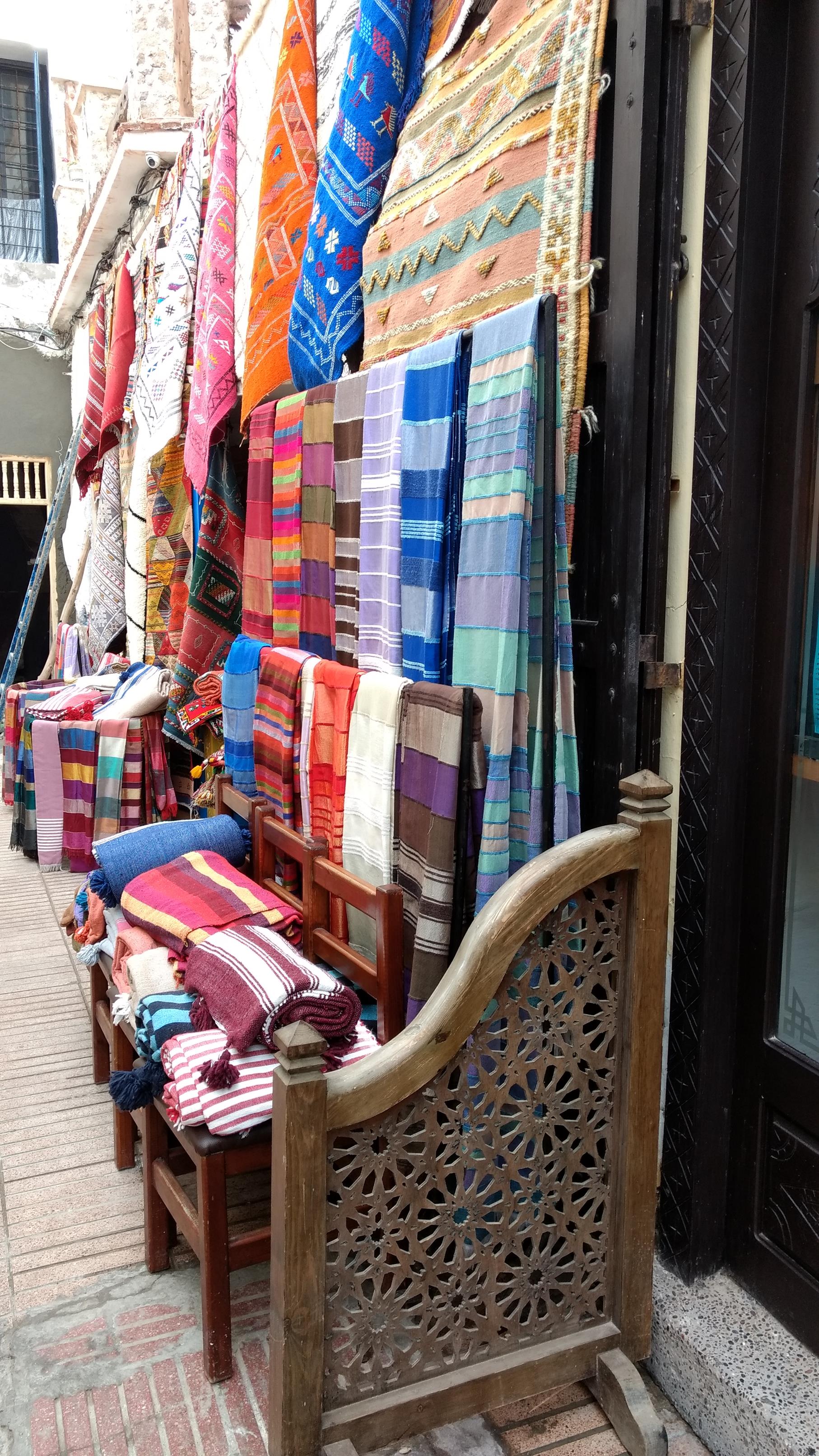 But the city is full of friendly people and traders that like to hold a nice conversation. Since our hotel was located in a dead end street, we had to pass some sellers on our daily way to breakfast or dinner. After only a few days the greetings became more and more friendly. We were constantly asked if everything was alright, if we liked our stay and what else we were planing to do. Everything was relaxed and towards the end of the week I felt like I was among friends. We met Moroccan rappers, strangers invited us into their home for tea, and we needed only a hand signal to get the usual order in our regular café. It was wonderful!

What you find in a shop in the medina 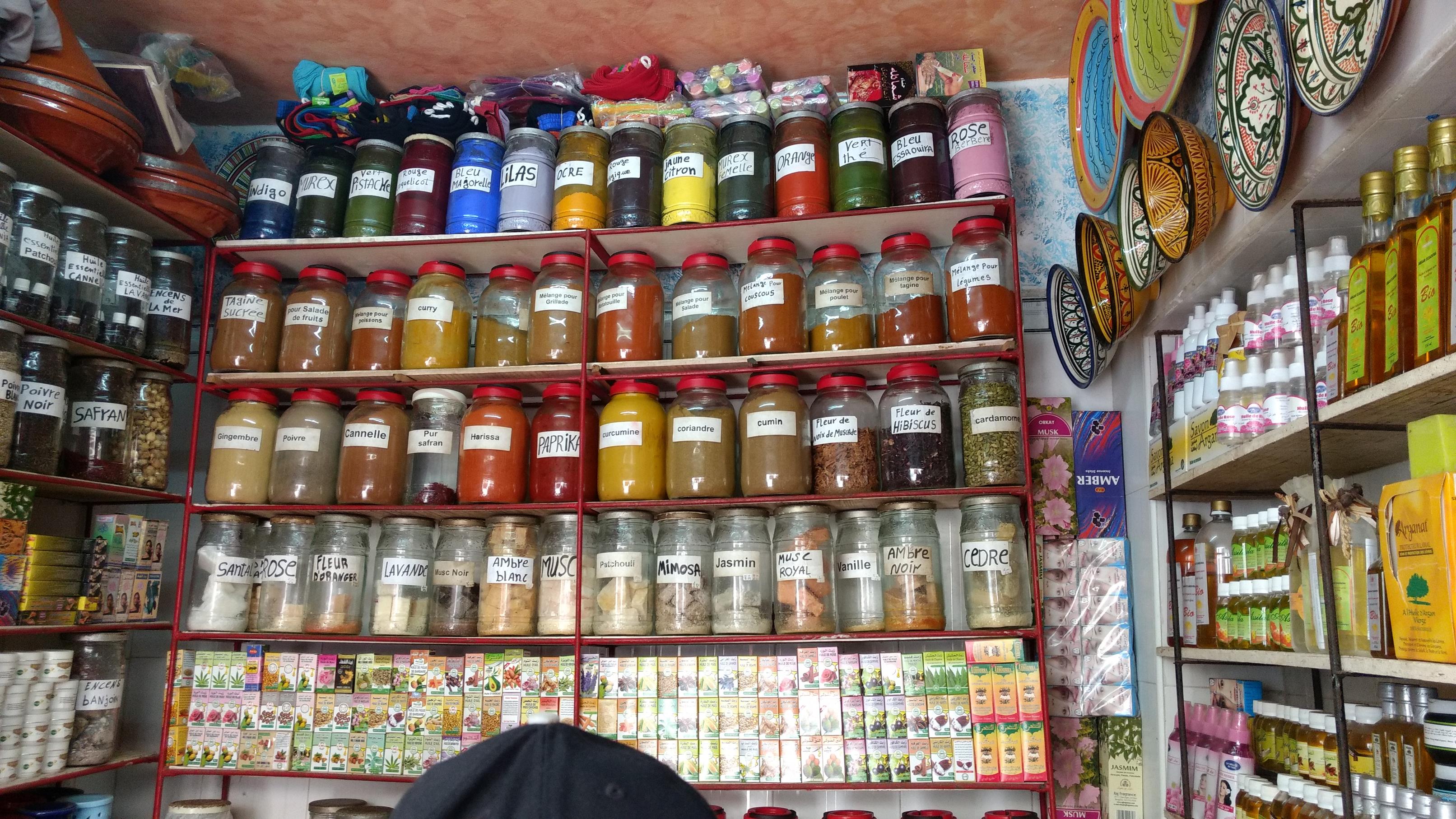 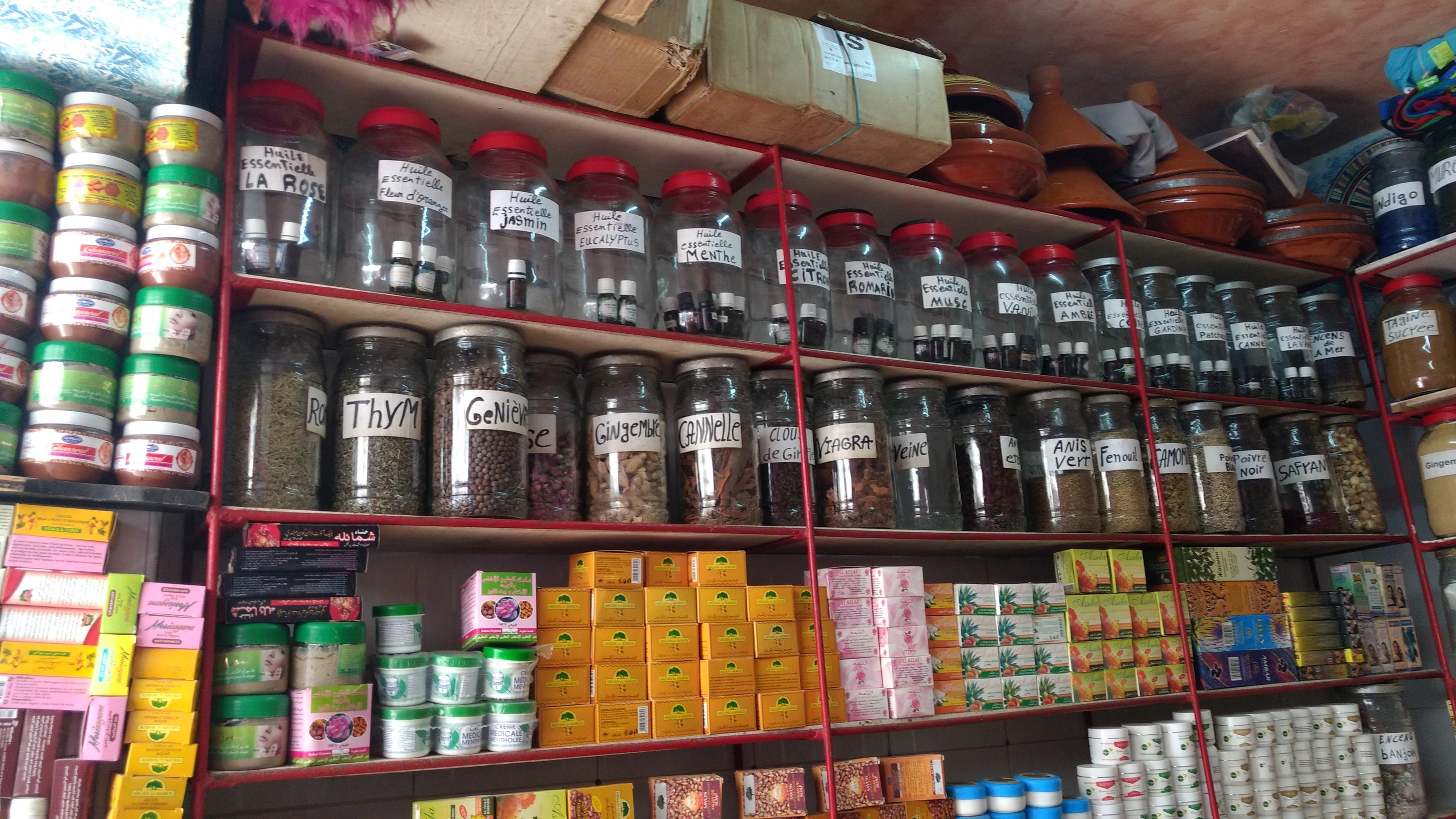 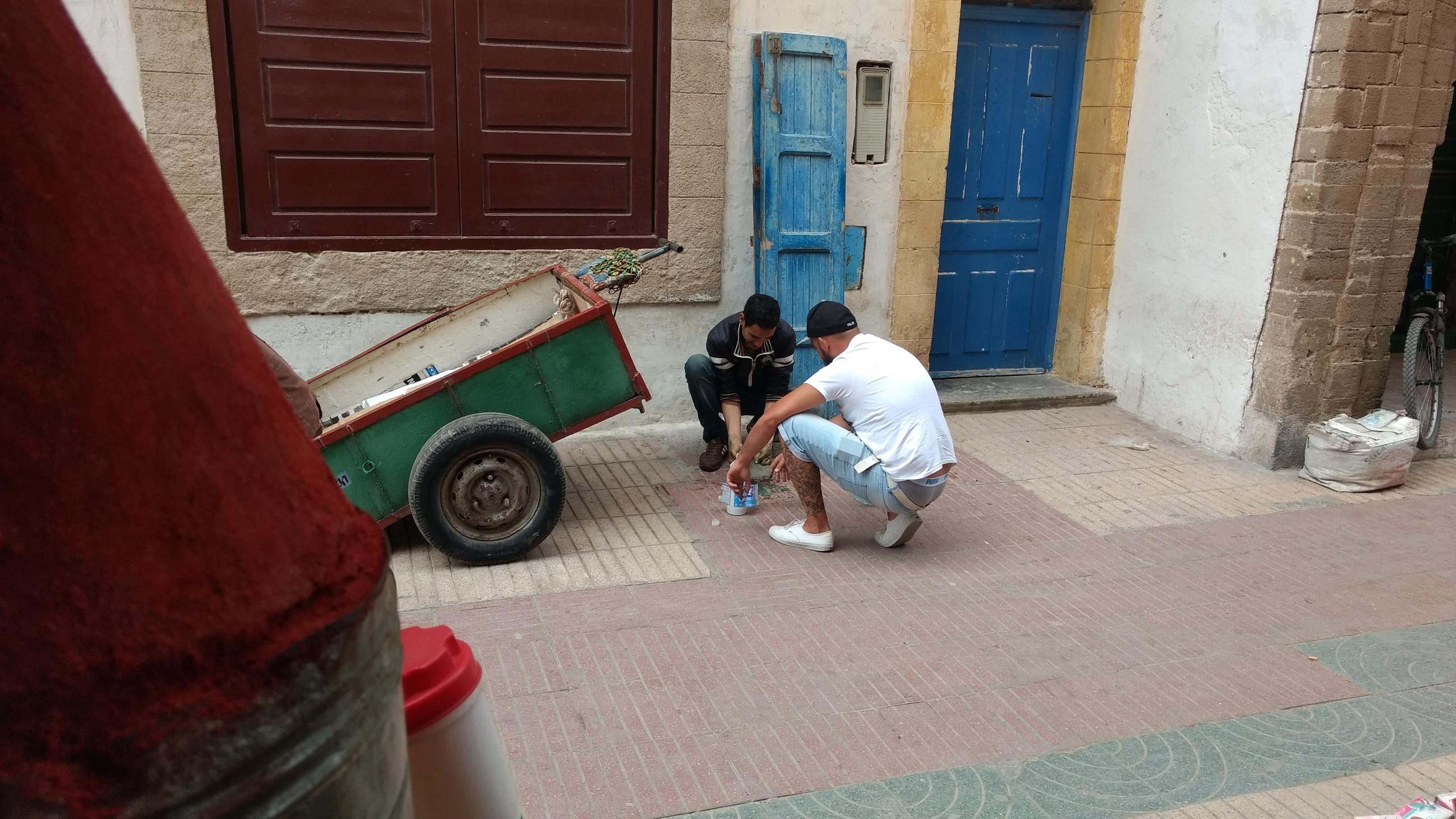 The castle with a view of the harbor 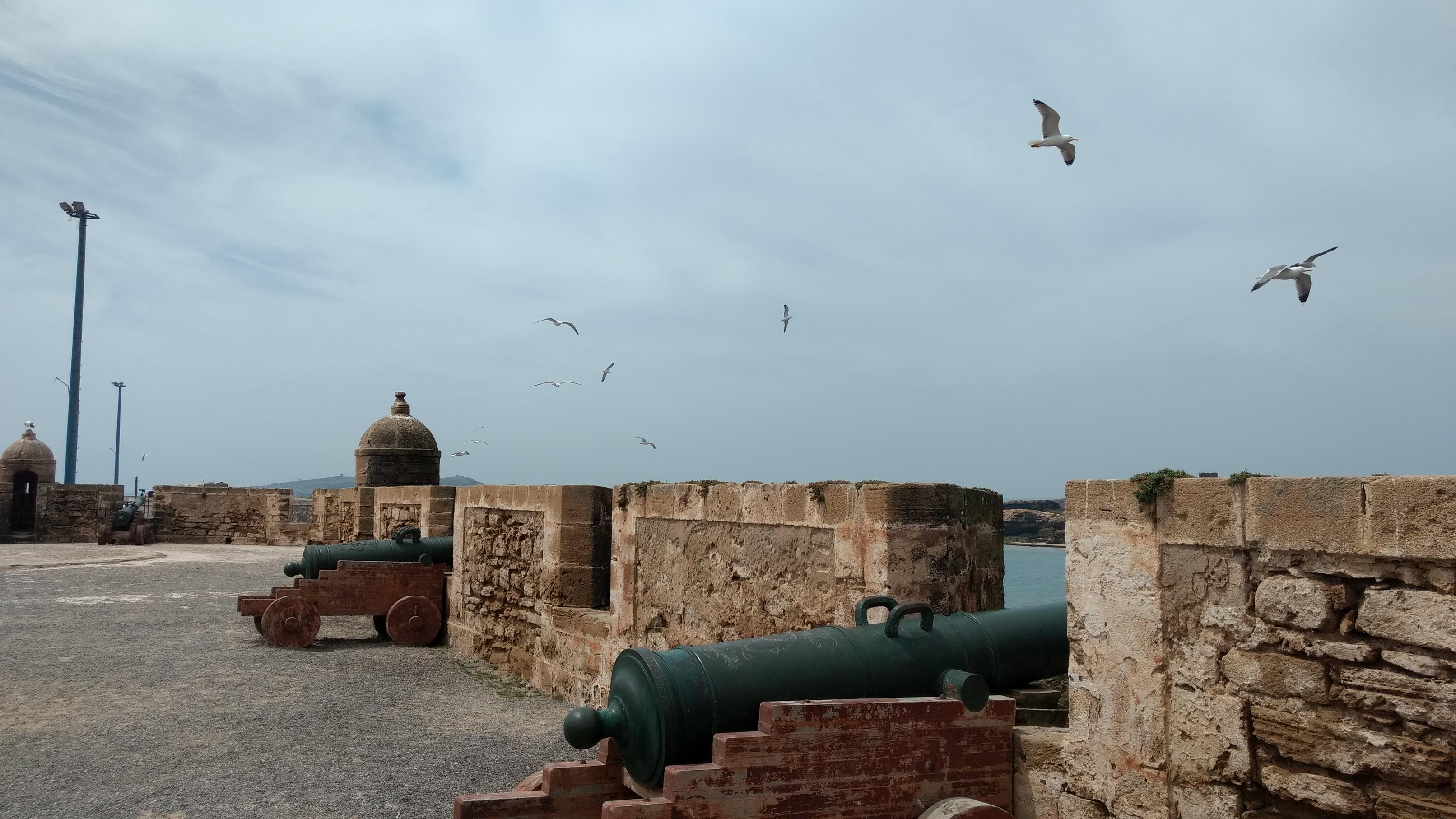 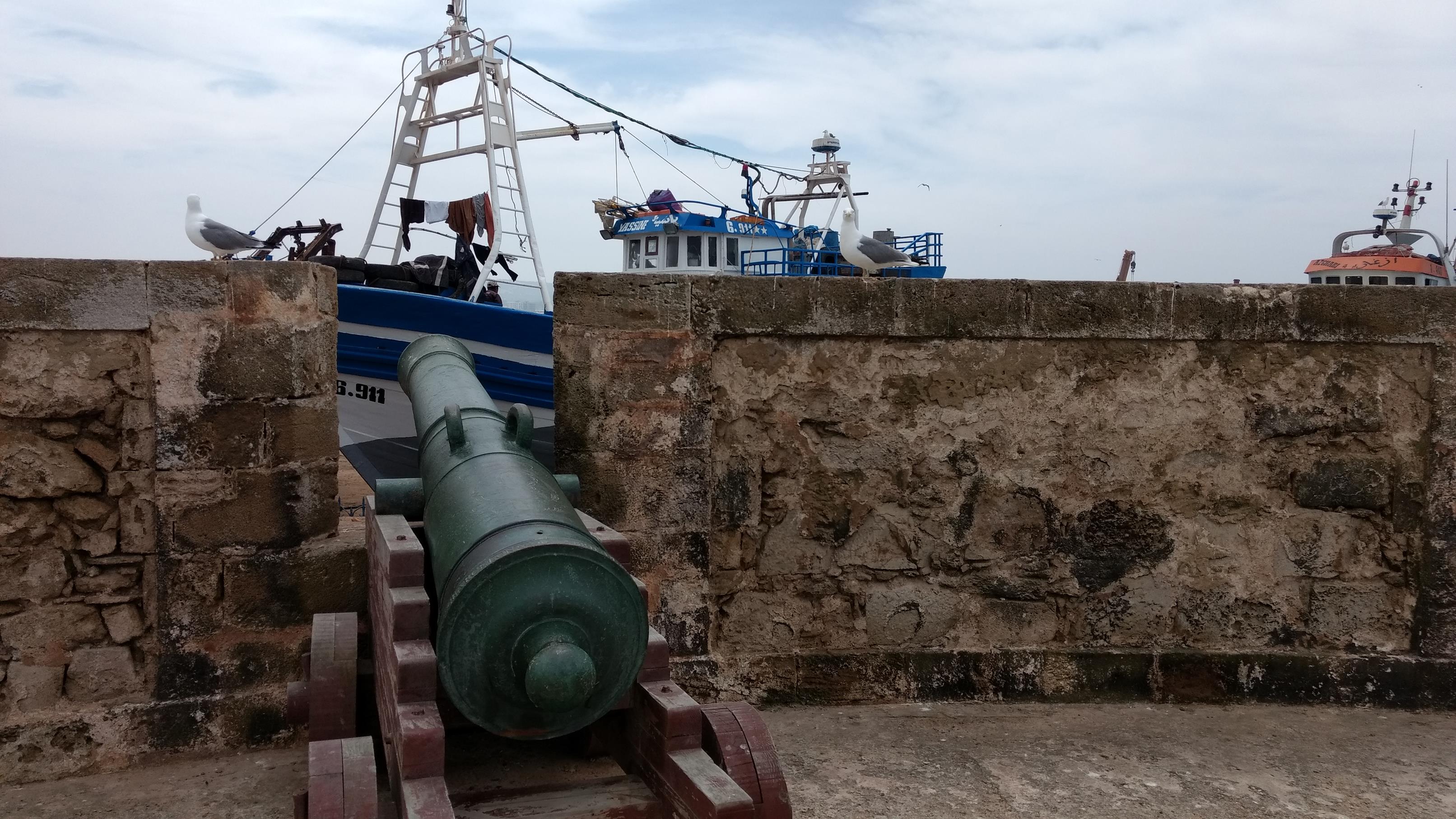 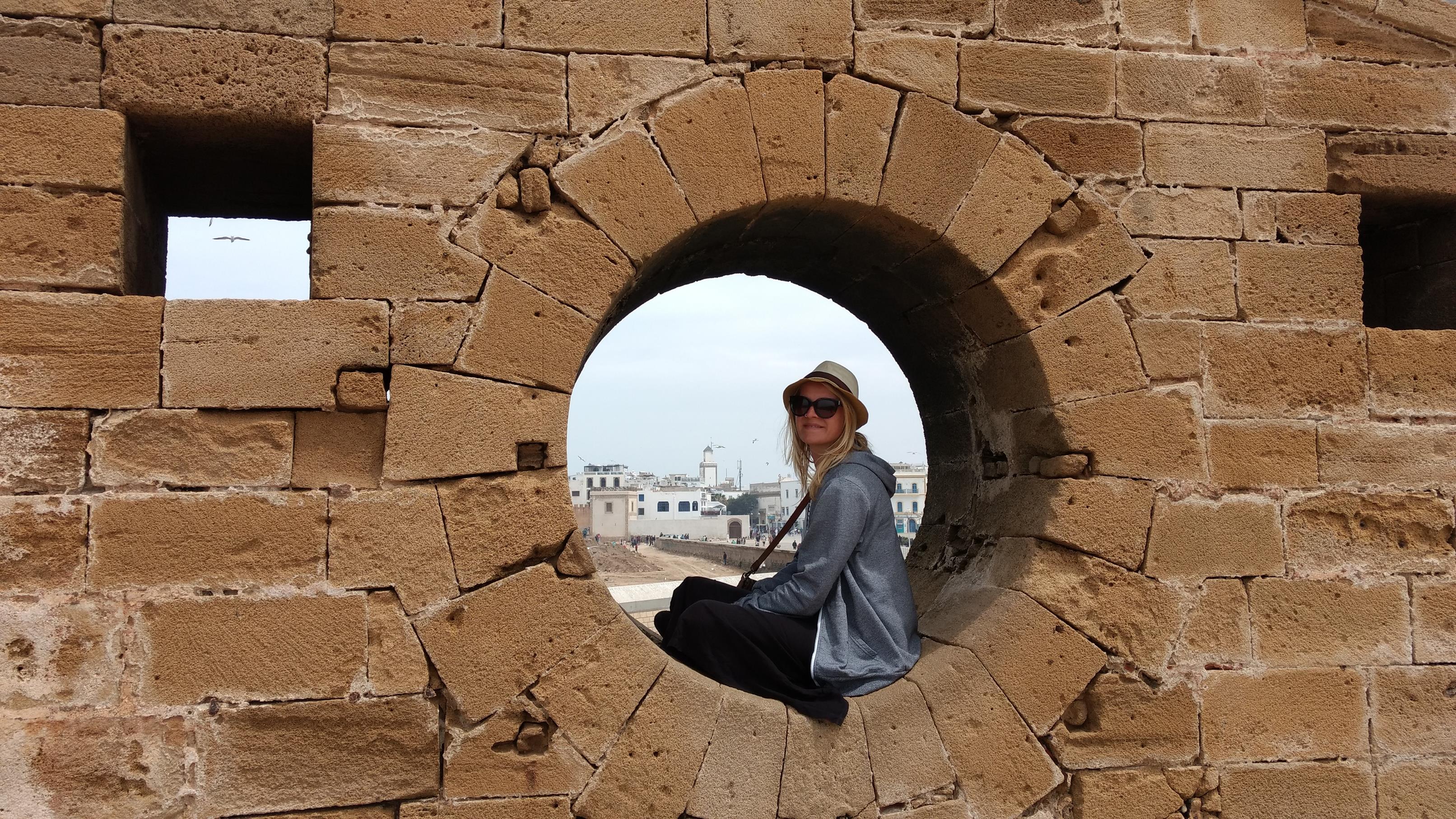 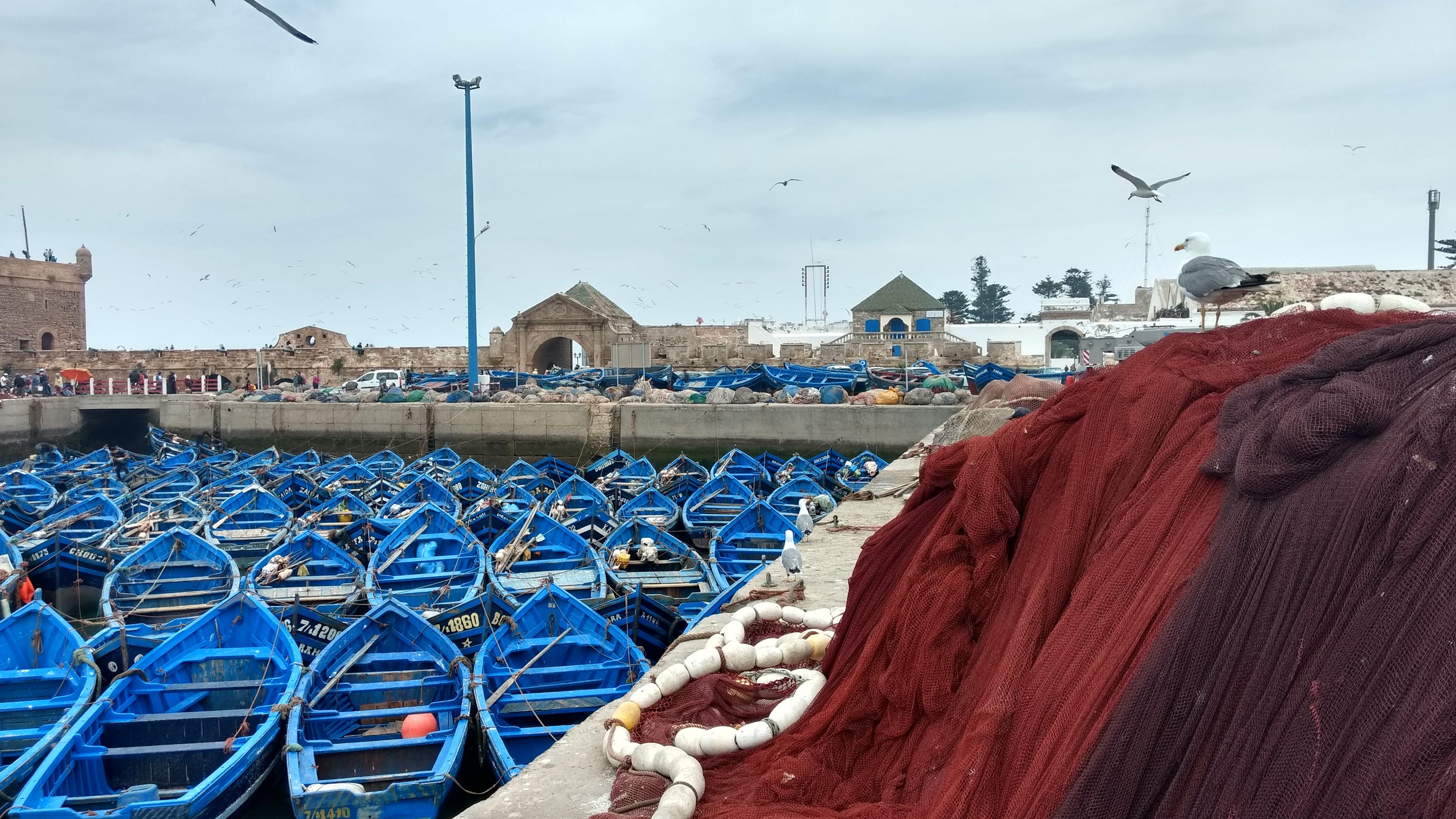 Morocco and the strays 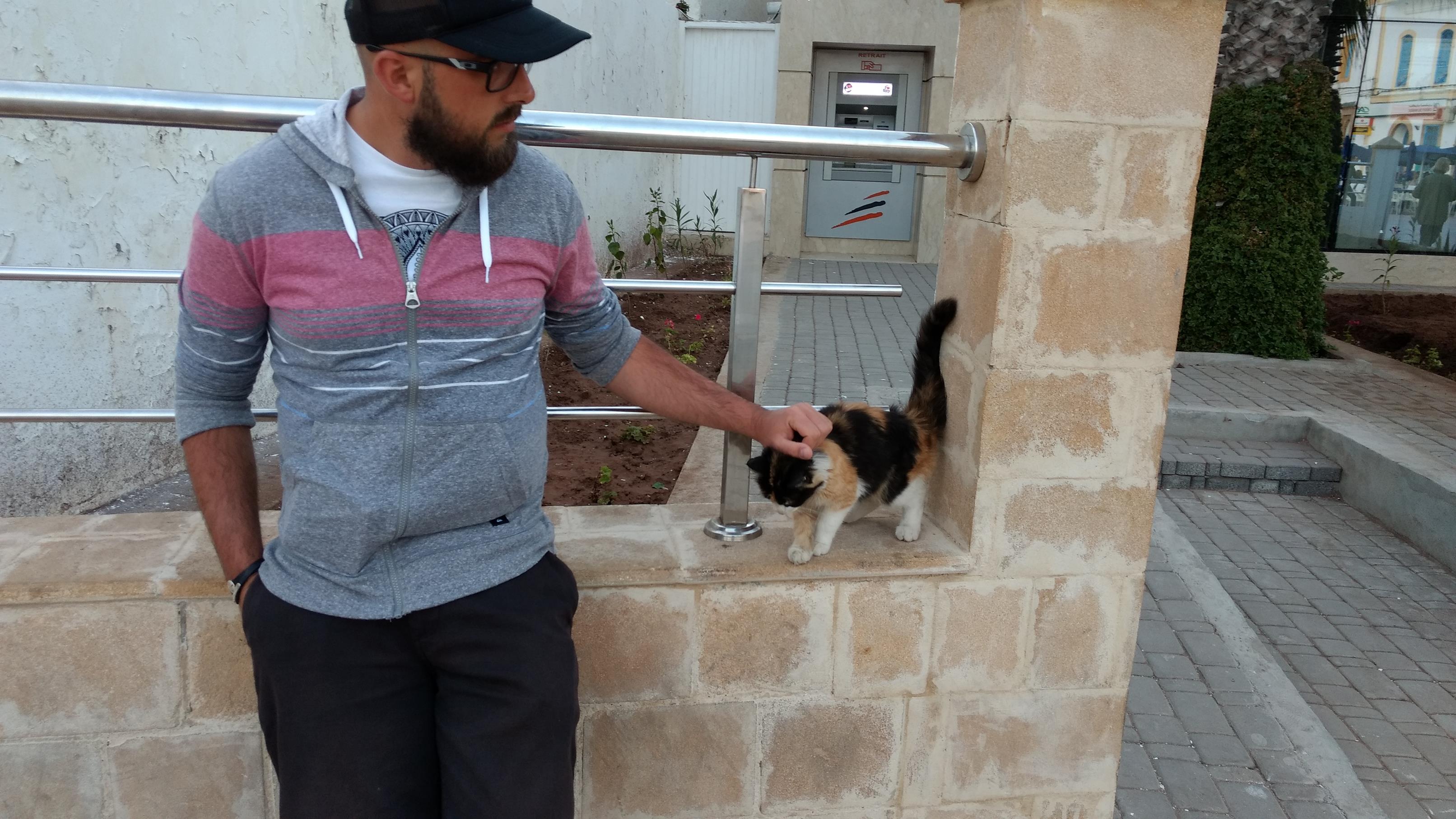 The medina is colorful and varied and you discover something new on every stroll through the old town, even if it’s just kittens. I was quite impressed by the loving manner of the locals to take care of stray cats and dogs. Everyone feeds any animals that wanders through the medina every day. The animals belong to no one but still to everyone. In Germany, this is unimaginable, I guess. 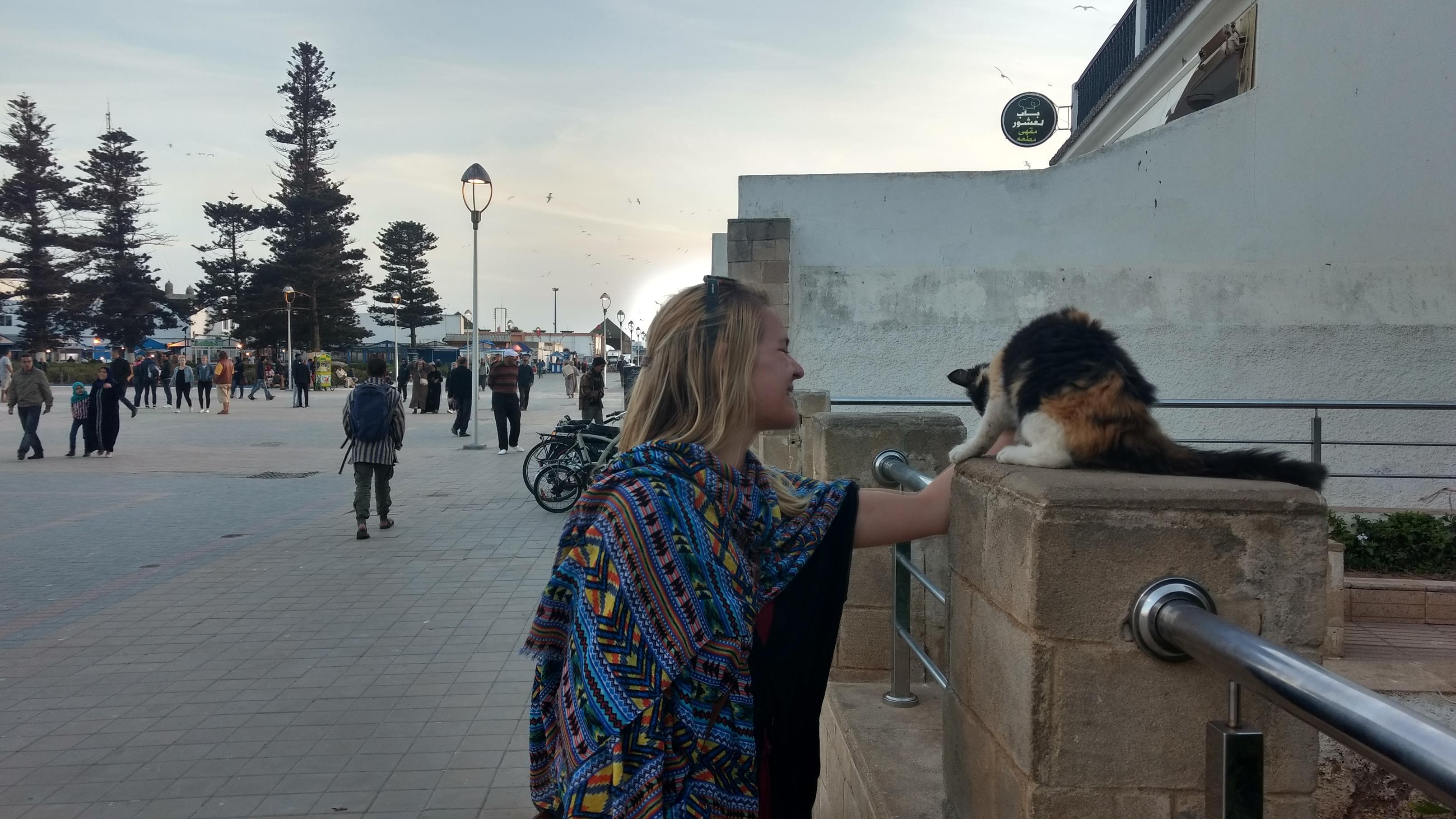 The port, there is the fish market 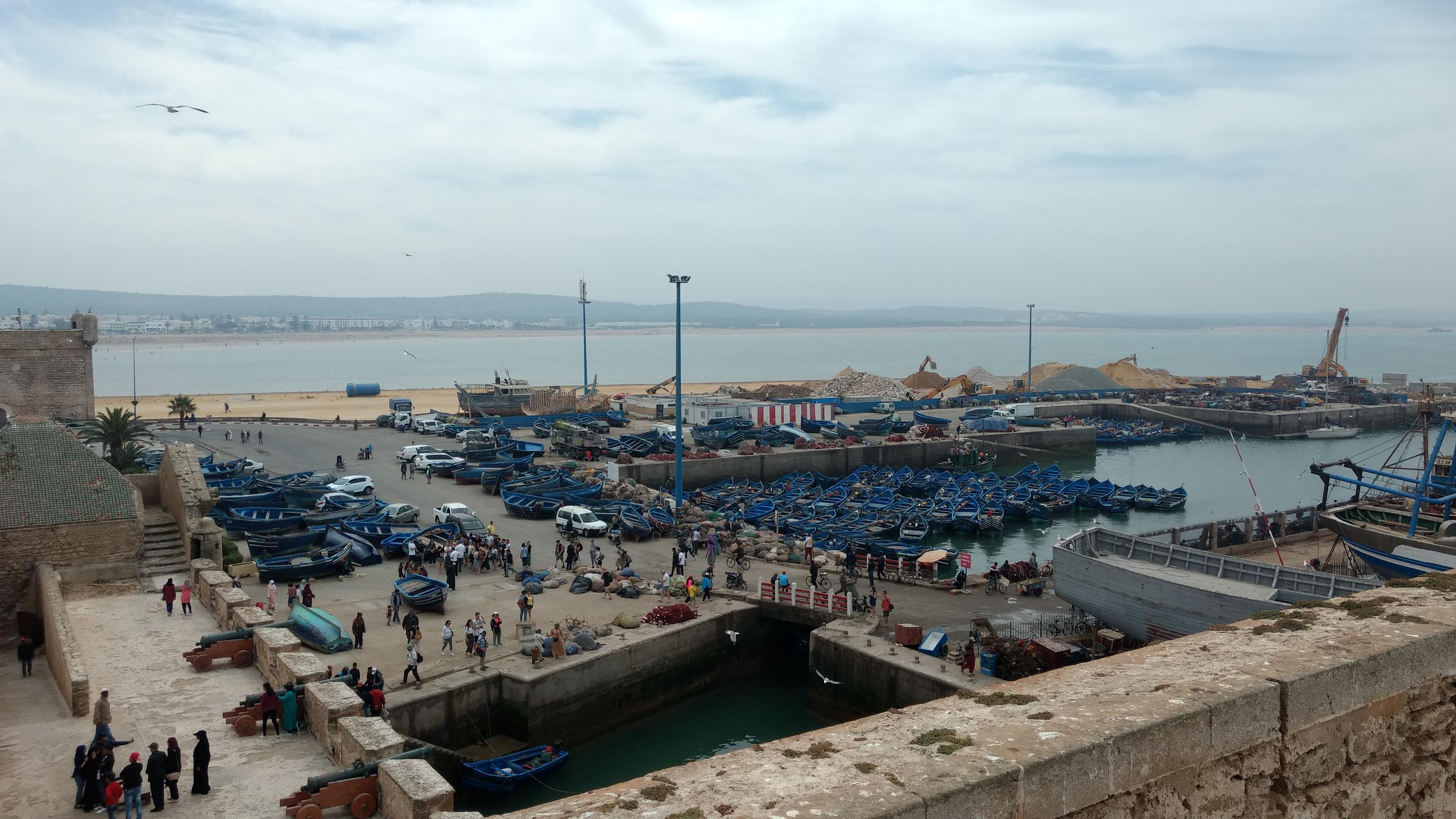 Something you should definitely visit in Essaouira is the daily fish market near the harbor. Here, a wide variety of animals are offered without refrigeration and only spread out on cloths or in crates – hygienically marginal but you can´t get it any fresher. A few meters from the market you can get prepared fish at countless stalls – a tip for tourists! 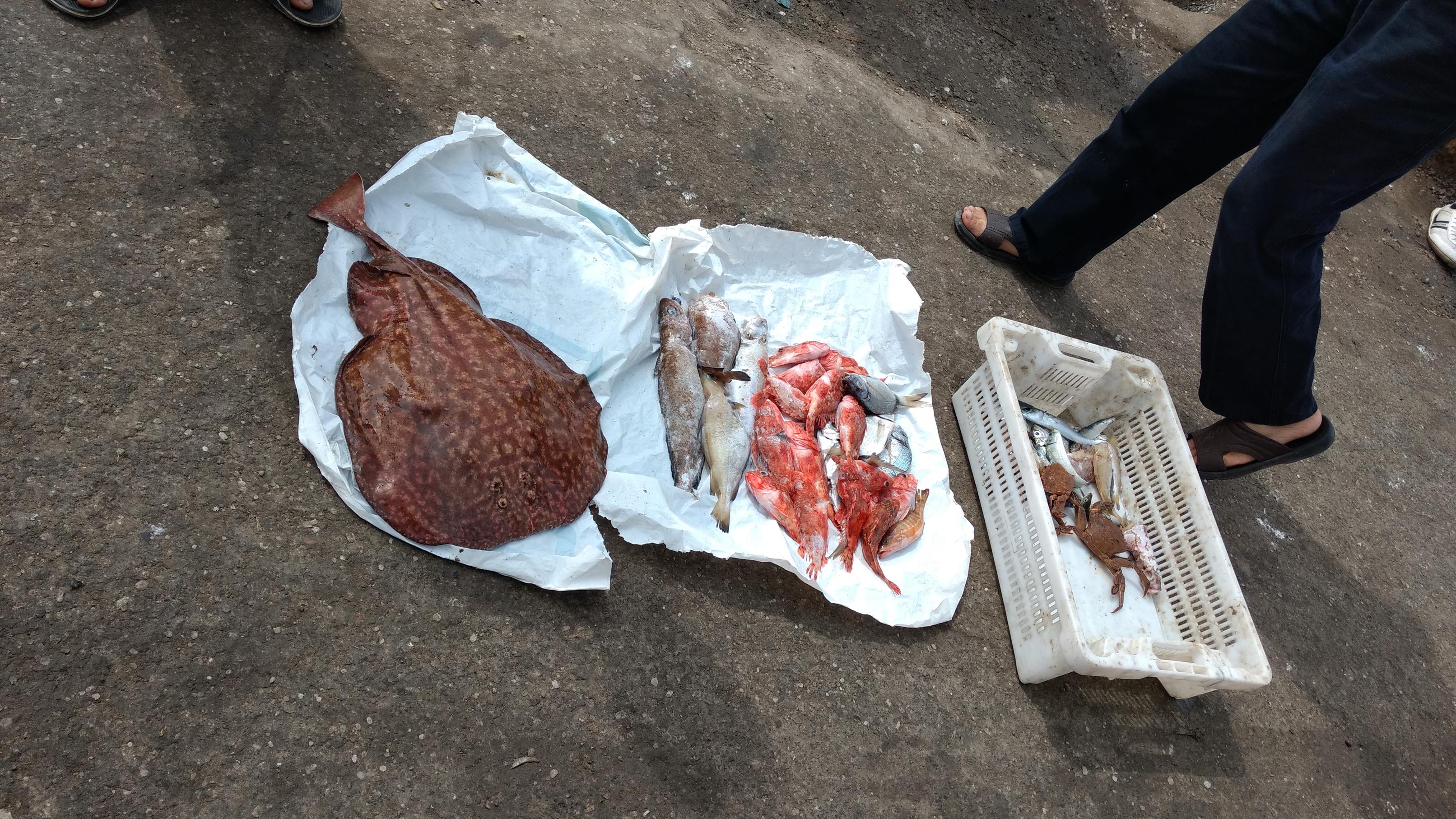 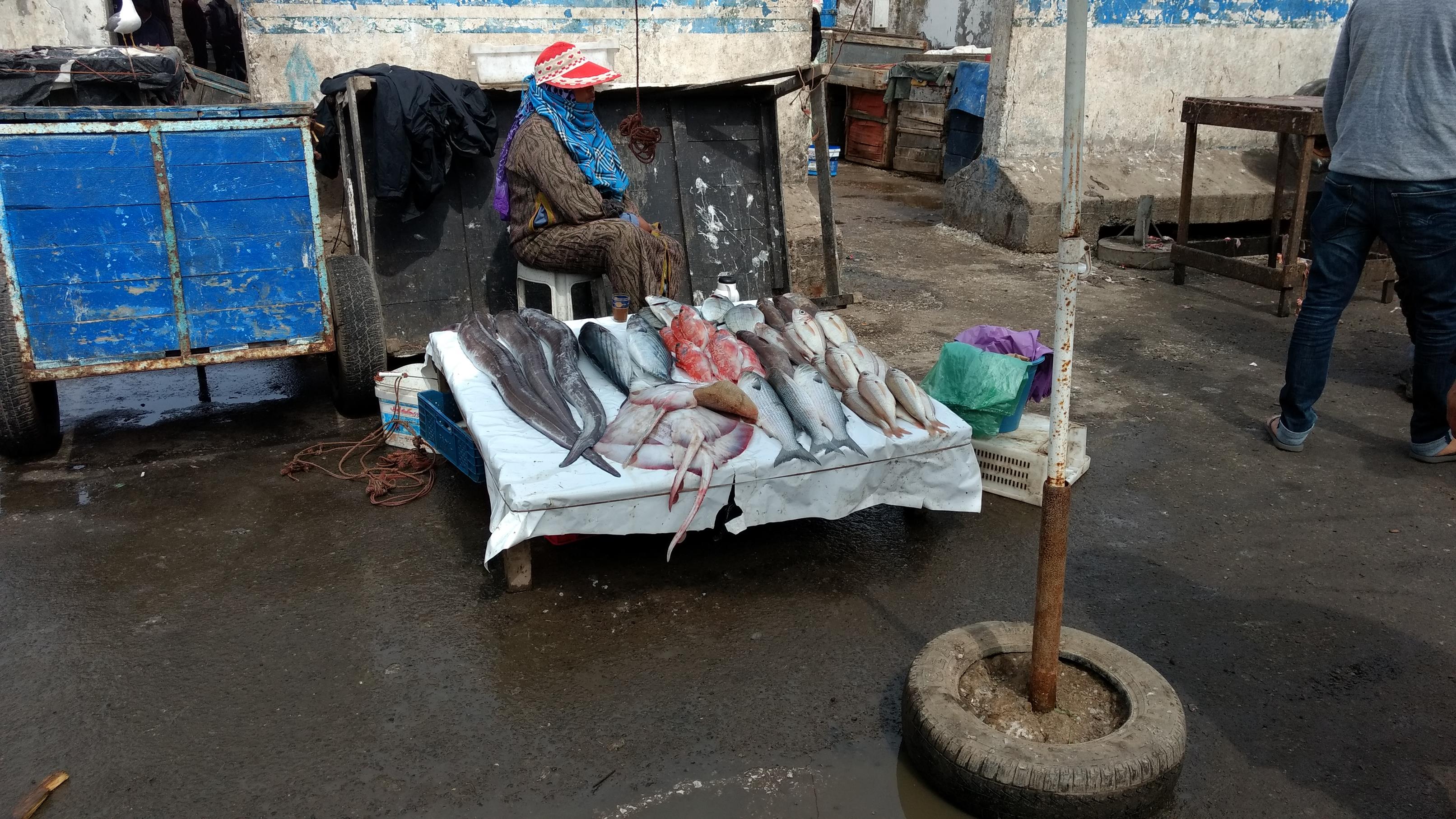 I´m a thief – to other Germans 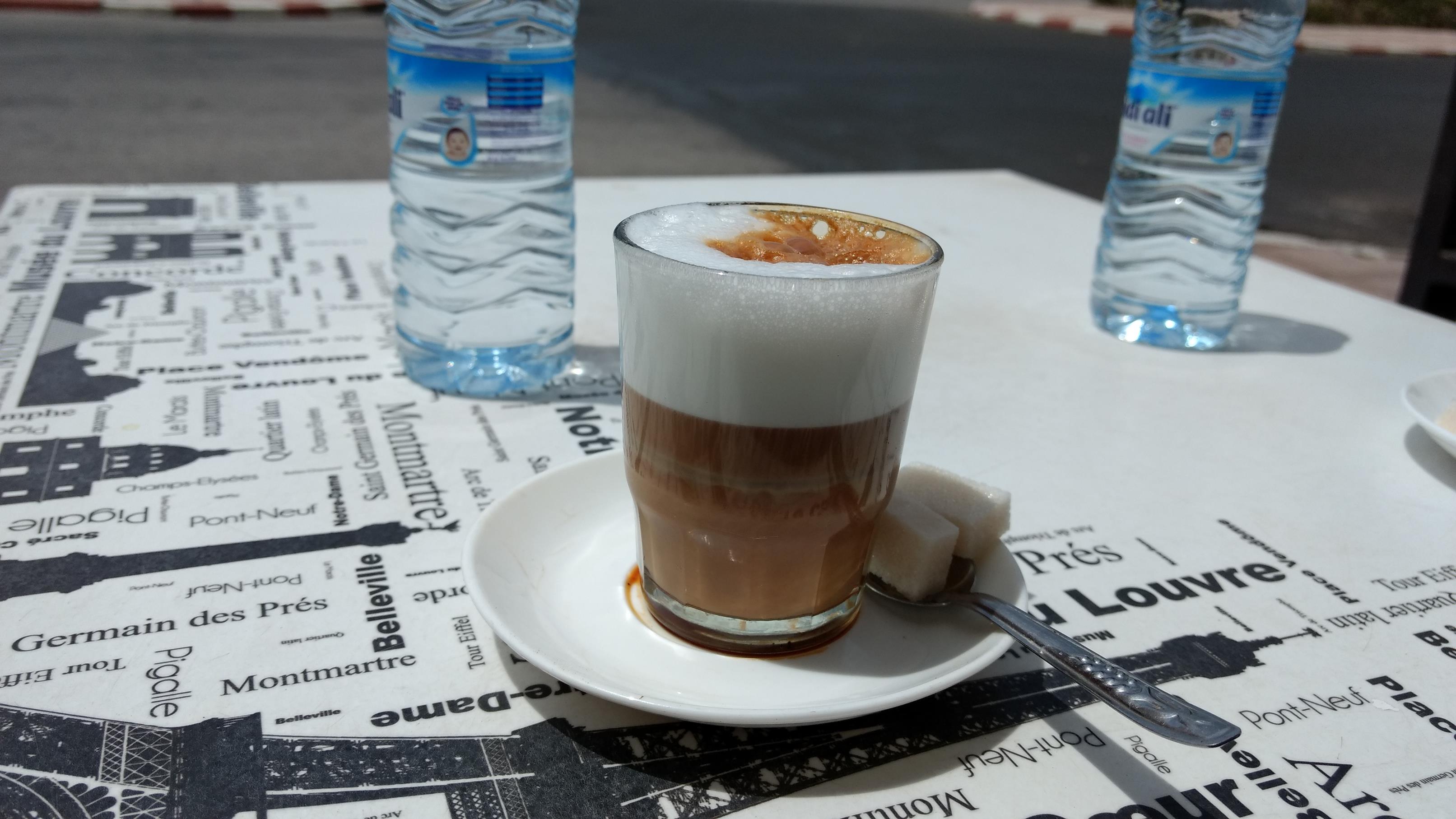 While we sipped our daily NusNus (coffee, see picture above) on an otherwise usual afternoon, a German travel group passed us by. One tourist was carrying a small, brightly colored parasol and you could read the faces of the salesmen and their thoughts: “She is weird”. The group seemed somewhat frightened and the women clung to their handbags, the men carried the backpacks on their belly etc. They were probably afraid of pickpockets. A few hours later I was walking with Tes past the group, close to the woman with the parasol. I had a long beard at that time, was tanned and seemingly dangerous. In the corner of my eye I could see the husband pulling the woman closer and overheard him whispering: “Be careful, don’t let him steal anything!””

A parking lot at the port 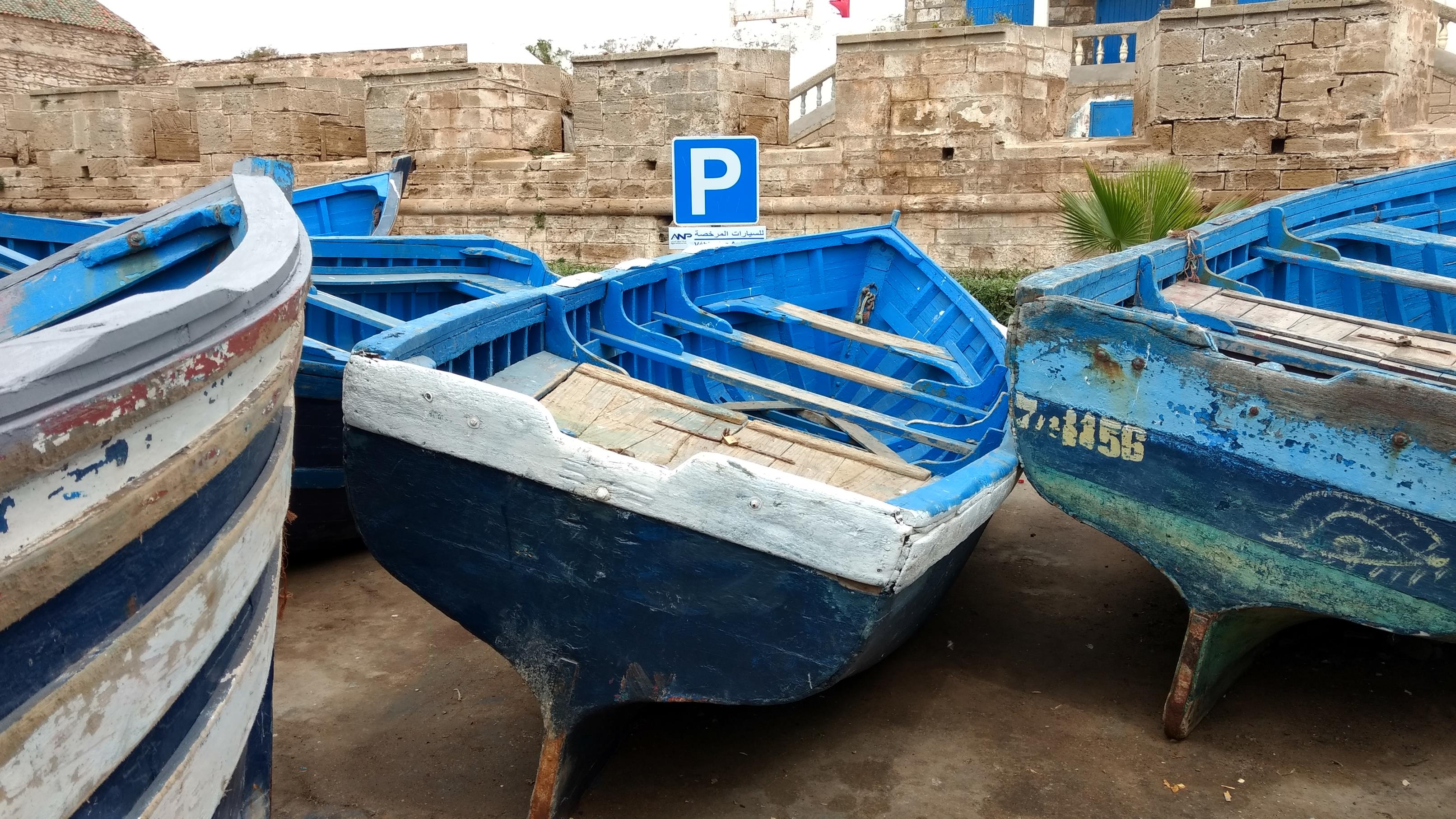 Usually I am never speechless. In this situation, I was! Of course, I didn’t explain anything, but only started laughing a few meters later. In our almost seven weeks in Morocco, we have never heard of theft or other offenses against tourists – so there is really no need to be afraid. For example, the rate of pick pocketing is lower than in Europe (!), especially in contrast to Spain. I personally feel safer in Morocco than anywhere in Germany. 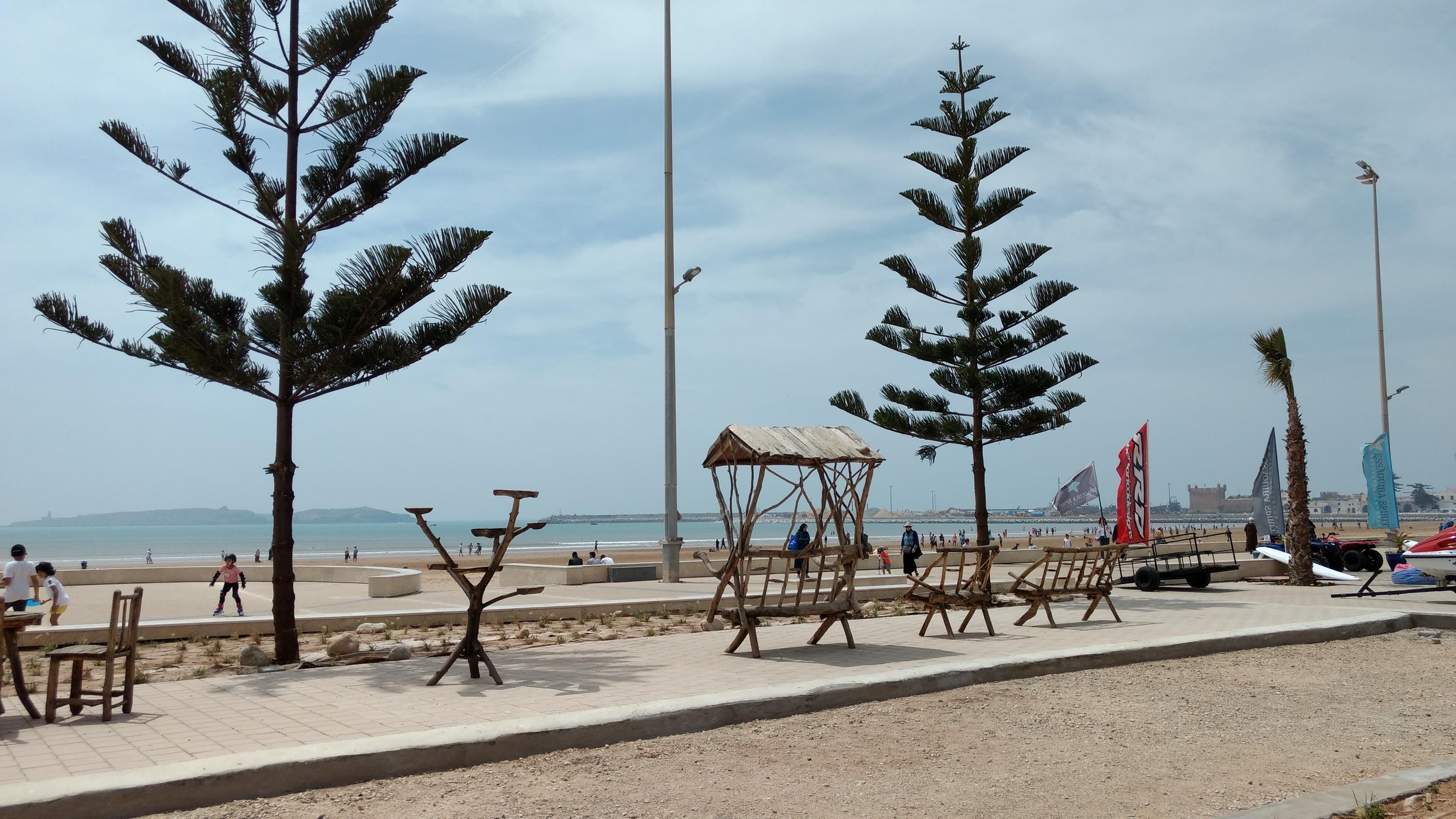 To finish the post: If you are planning to visit Agadir, you should rather visit Essaouira – it’s so much nicer! 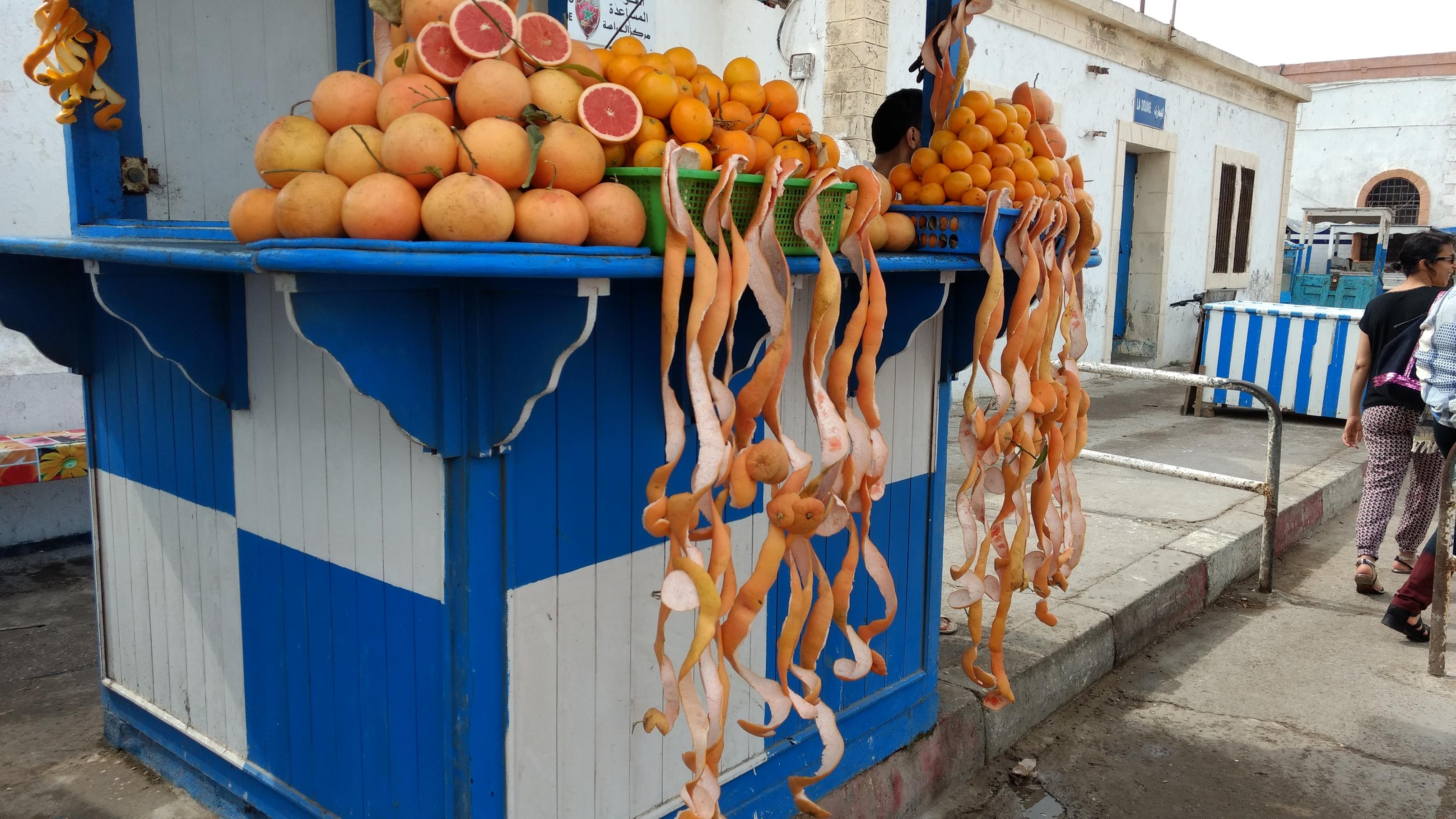 More about our trip through Morocco in the next article – Casablanca. 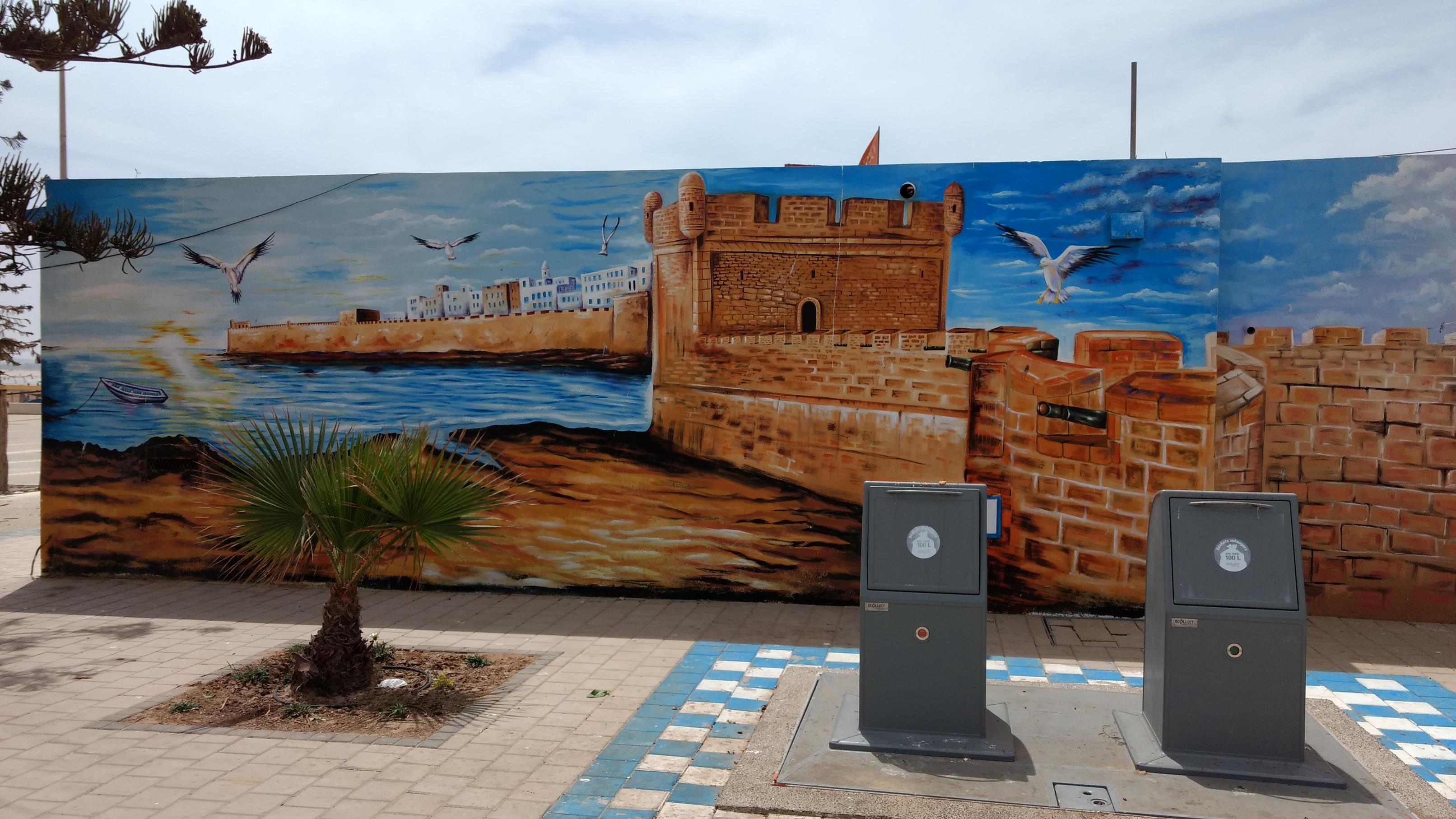