Once again we took the bus to get to our destination. Then we took a a taxi to the medina in Meknes. In the old town, we found our hotel by chance: As we were talking on the street, we said name of the hotel coincidentally out loud and at the exact moment the owner passed by us. Otherwise, the search would have taken a long time. The old town in Meknes is very nested and there are hardly any signs for orientation. In general, the city of 600.000 people offers little sightseeing.

On the roof of the hotel, next to the great mosque of Meknes 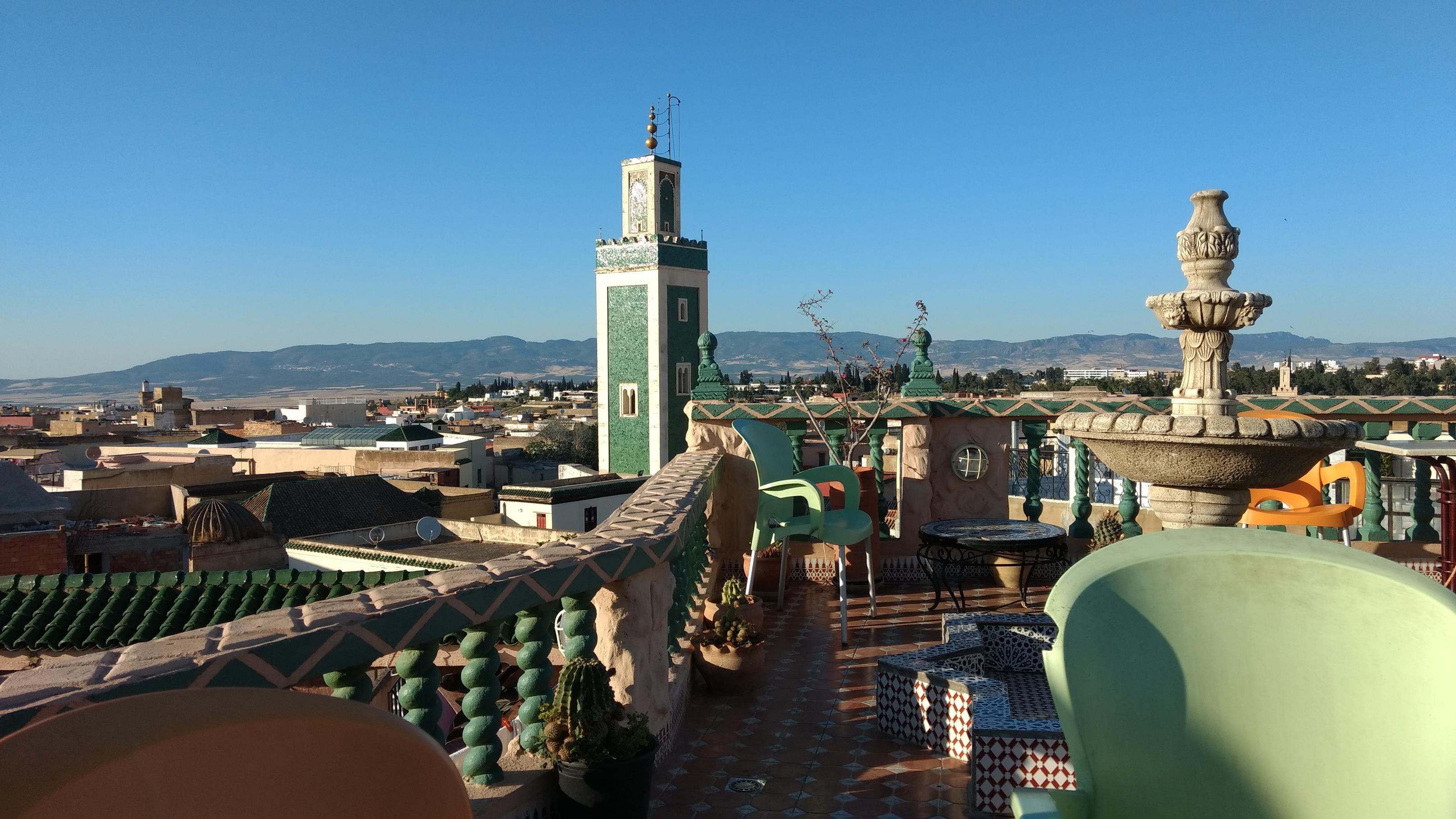 We spent most of our time at the huge marketplace, drinking coffee or tea. We also strolled over the market and checked out the old town – both are right next to each other and you can buy everything your heart desires. In general, the city is not very special and has little to do with tourism. I can’t say anything bad about Meknes, though. The people are friendly and helpful, you will be asked if you need help and you are also sent in the right direction. In Rabat, it´s supposed to be different, at least that’s what we were told by several locals independently of each other – in the end, this was the reason why we didn’t visit the capital.

The market place and the ostrich 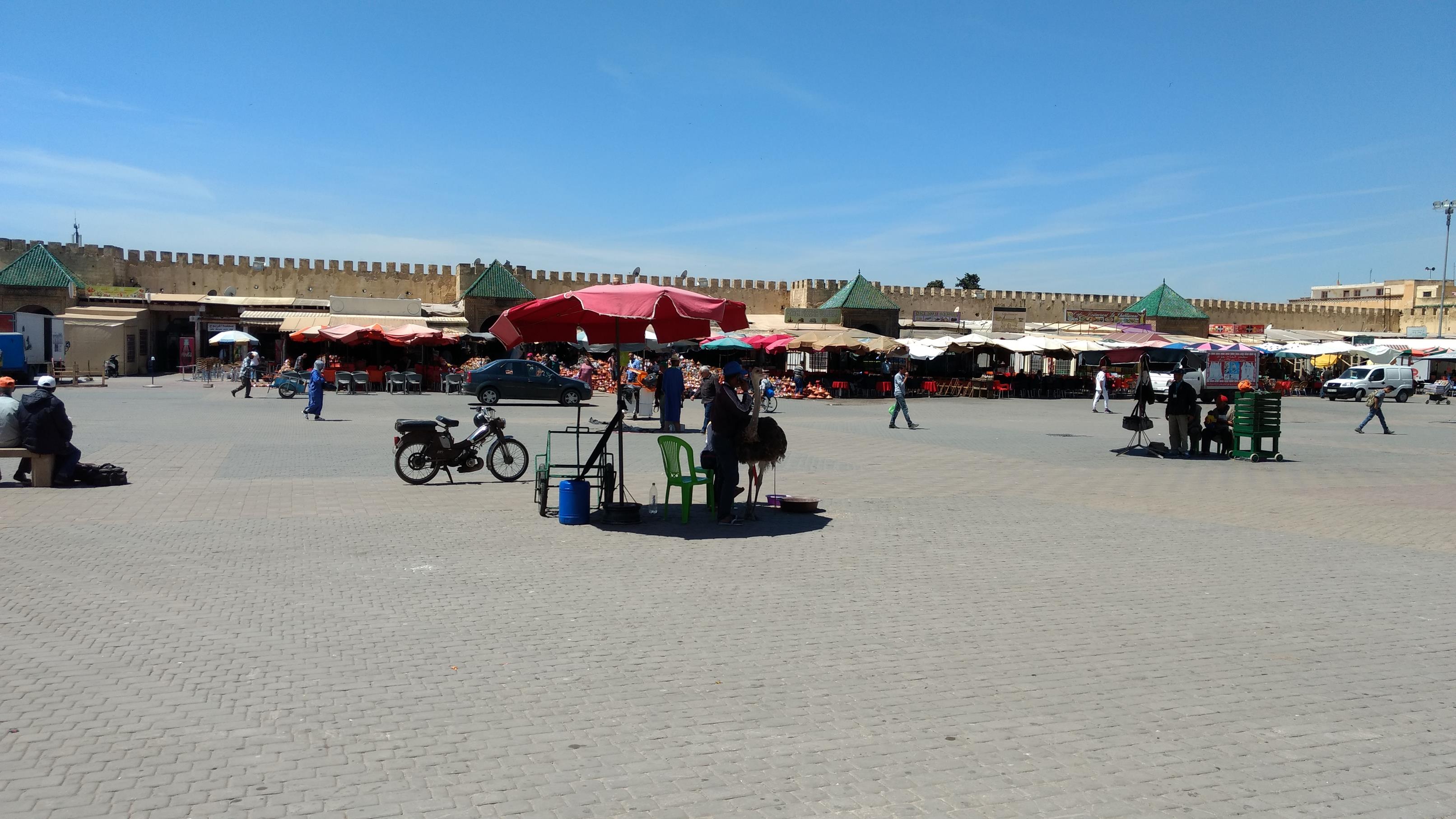 At the snake charmer 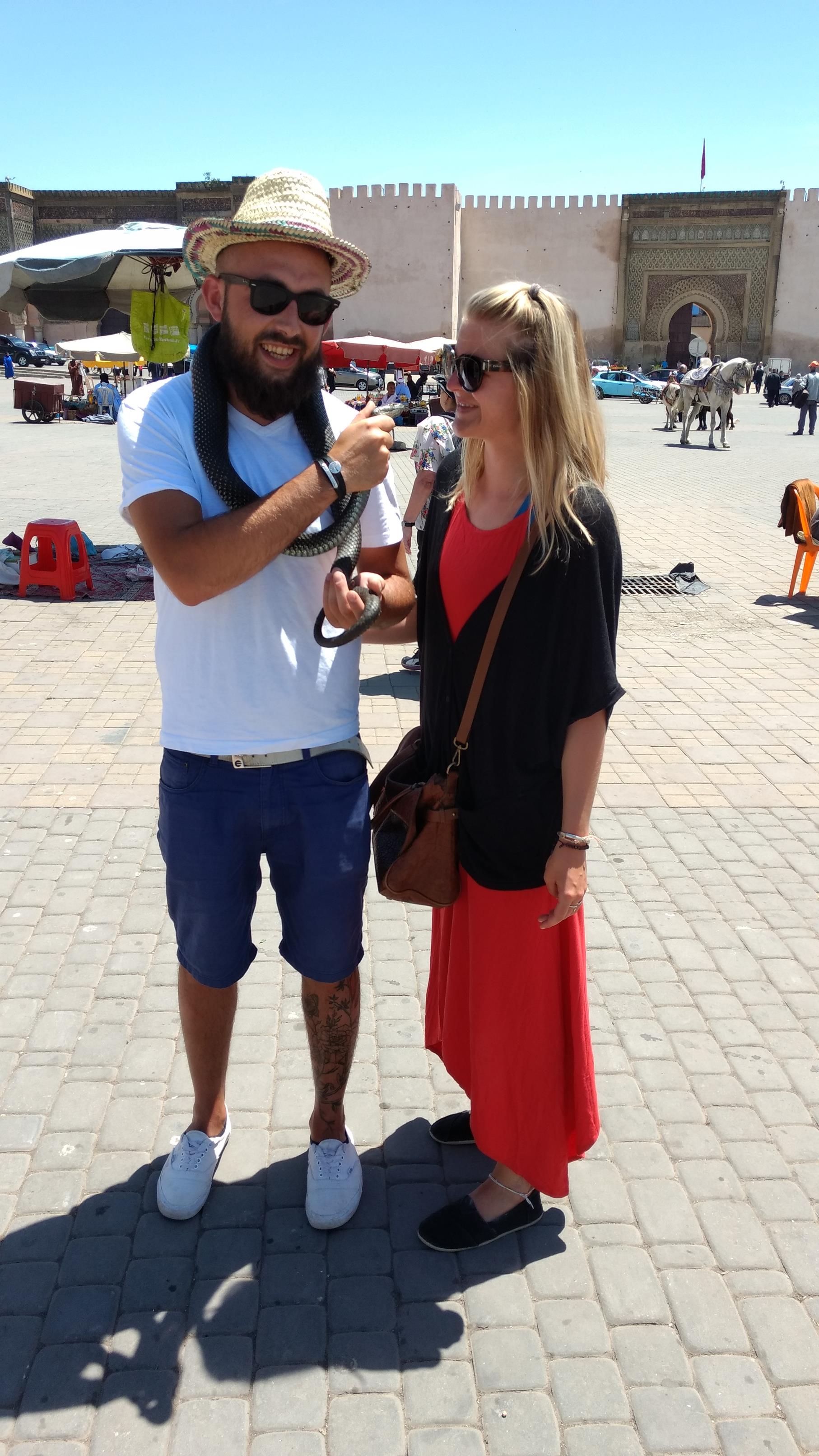 In the hotel in Meknes 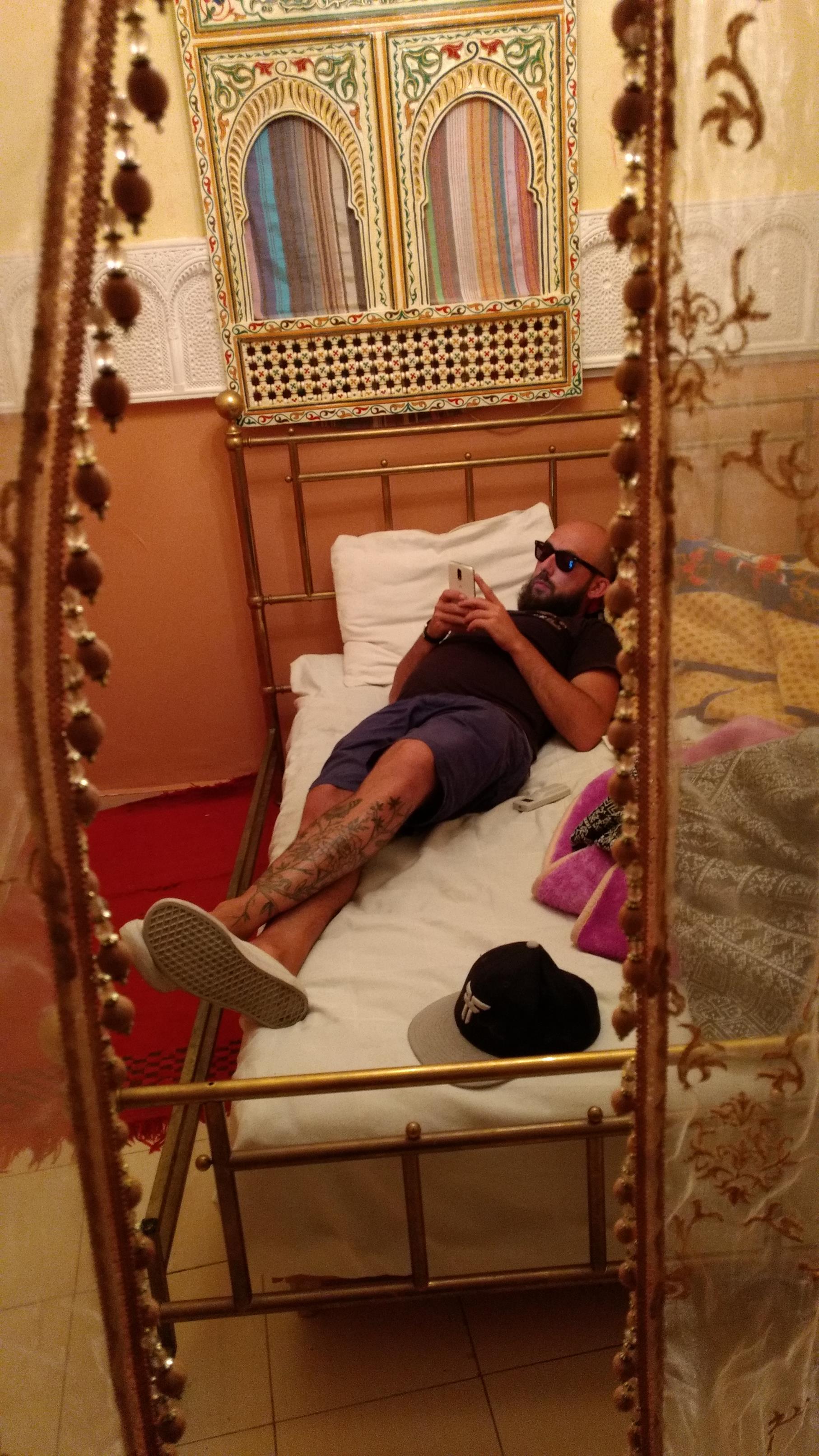 A special feature in Meknes was the ostrich on the market square. The animal escaped one afternoon and roamed freely around the square – followed by its owner, wanting to catch the bird  – funny to watch! We also tested a small original Moroccan grill. You get nothing else but pita bread stuffed with meat, while sitting in a room that offers just enough space for a table (and everyone else is romping about). You talk to the salesman, while he is preparing your food freshly. 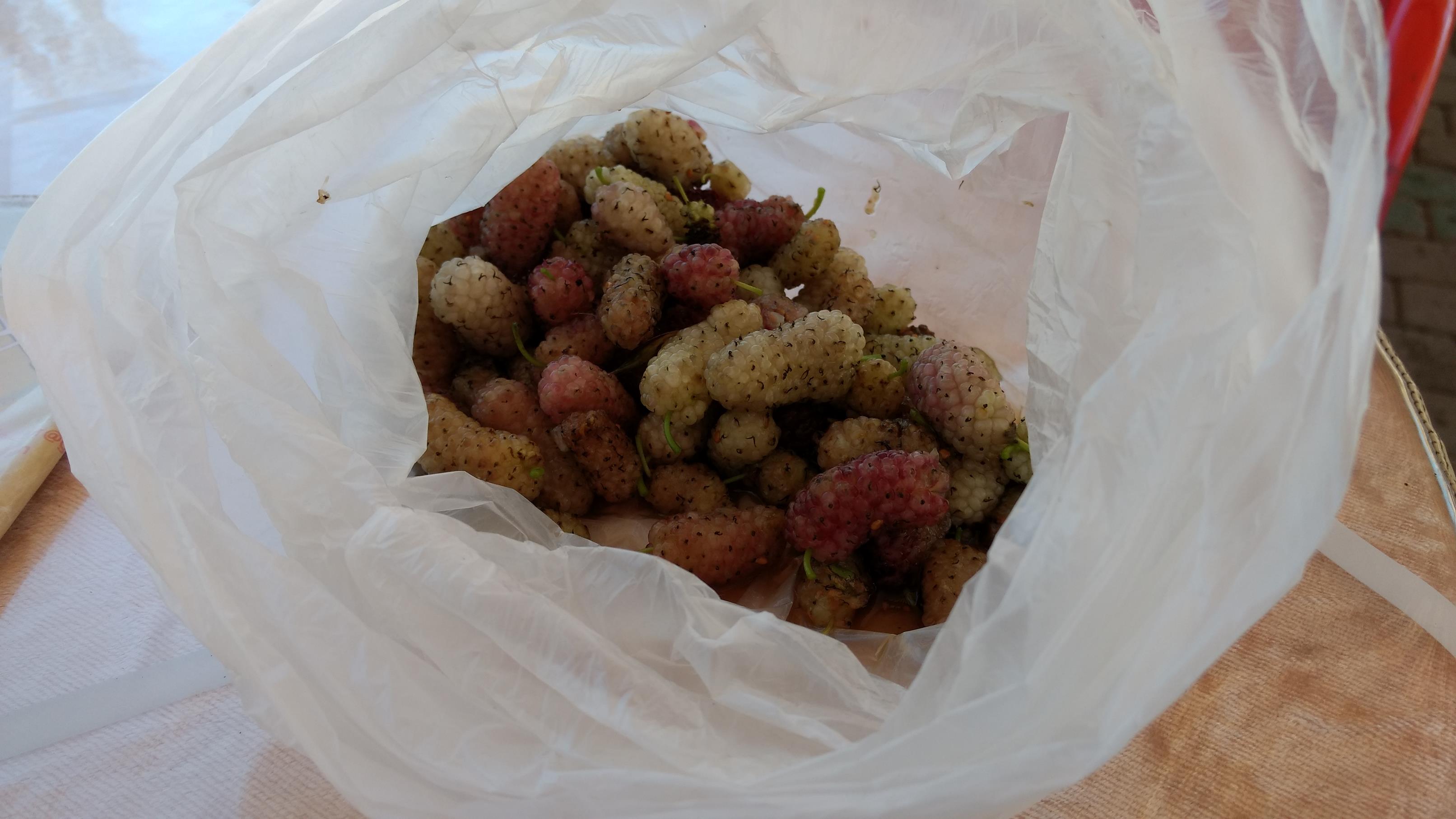 Apart from that, there wasn’t much to see in Meknes (the biggest highlight is the Bab Mansour gate) and you can skip the city on a tour. In retrospect, I would rather go to Tétouan – also known as the white dove. In contrast to Chefchaouen, everything is white instead of blue.

We stayed in Meknes for a few days and went to Fez via train. This is cheaper and faster than by bus, but not all cities are connected. Chefchaouen, for example, can´t be reached via train. Overall, if possible, you should always take the train into consideration and inform yourself – unfortunately, we figured this out too late! 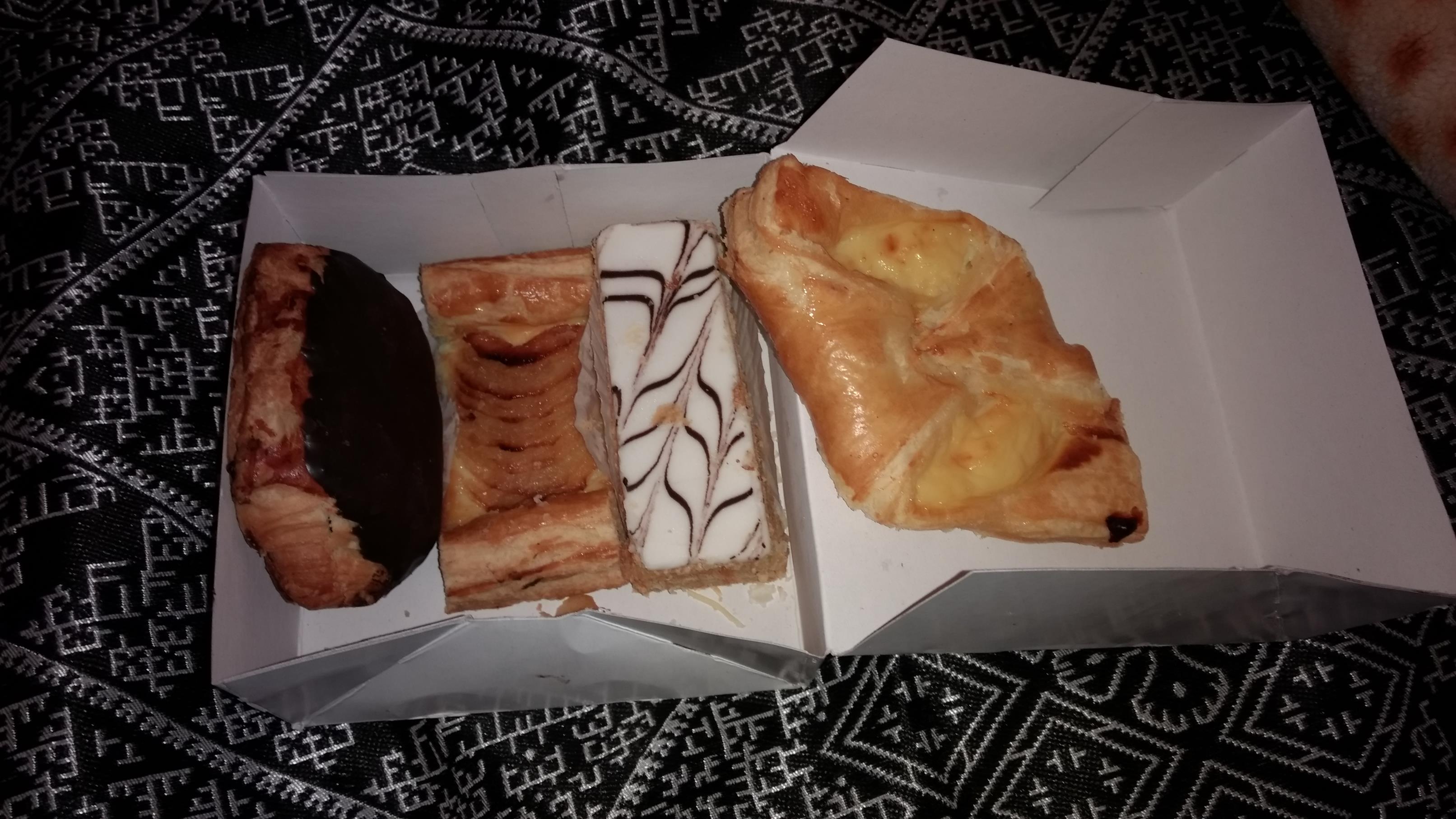 The medina in Fez

On the train to Fez, we met two young Moroccans and spent the whole trip talking. After we had moved into our hotel in the medina, we went to explore the old town. Soon we realized that this is anything but easy in Fez. The  old town consists of over 9000 streets, that often end in dead ends. After we got lost several times, we coincidentally found some interesting parts of the city and  even met the guys from the train again. They took us on their journey through the city and made things possible a tourist would never experience. We visited a carpet weaving mill, climbed up on roofs to enjoy the view and practically had our personal tour of the city.

The most beautiful place in Fes 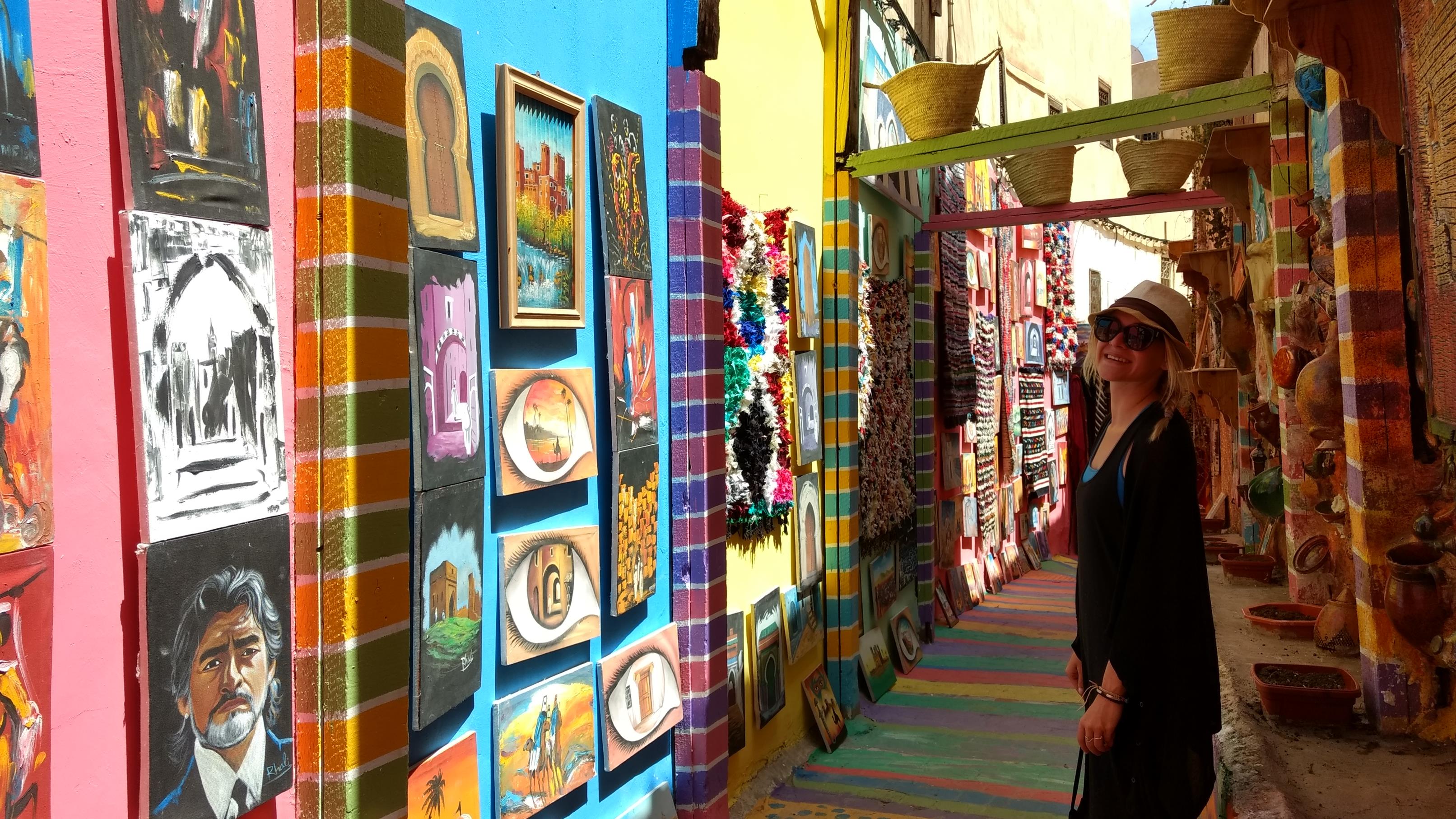 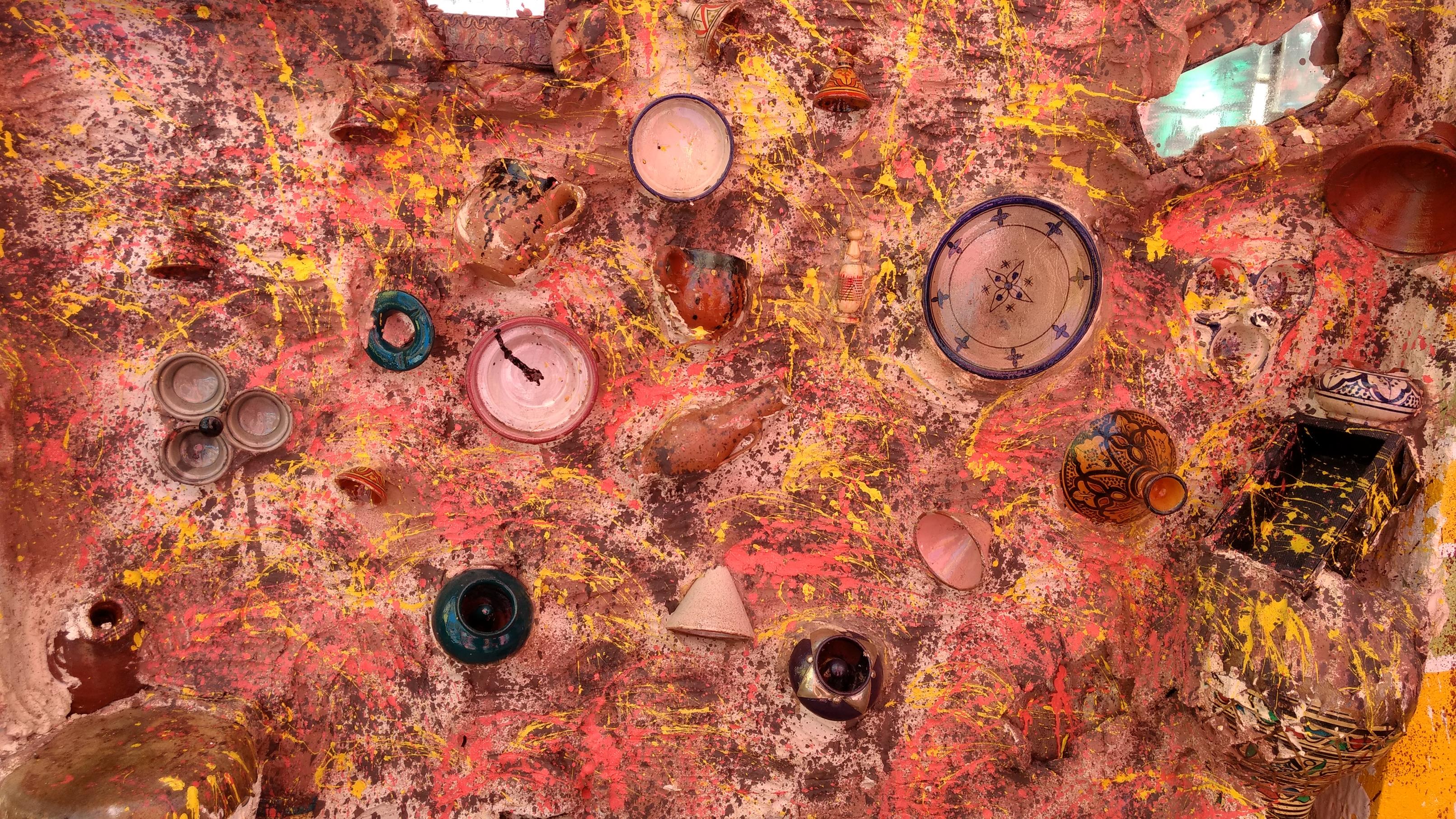 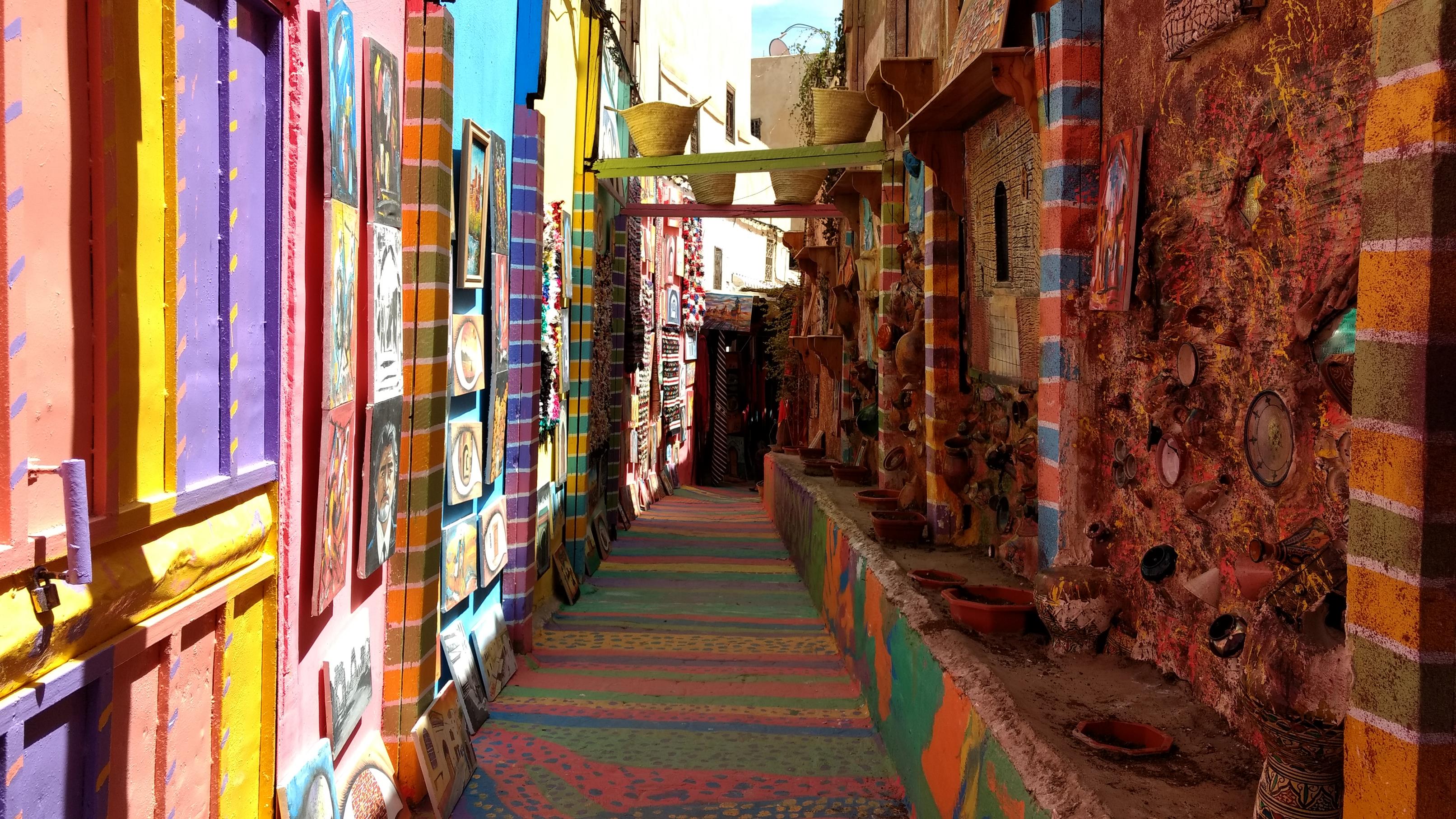 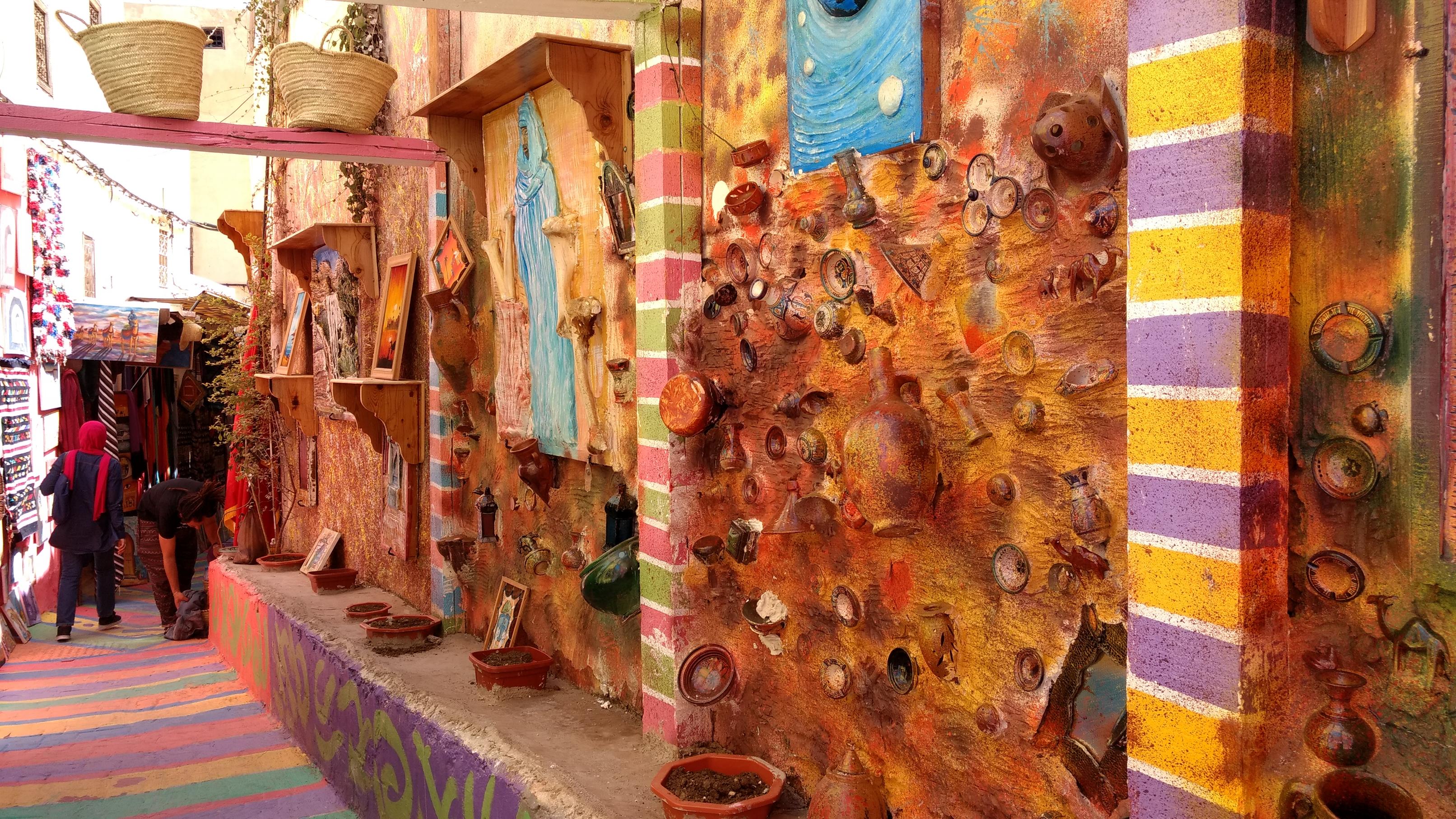 Over the roofs of Fes 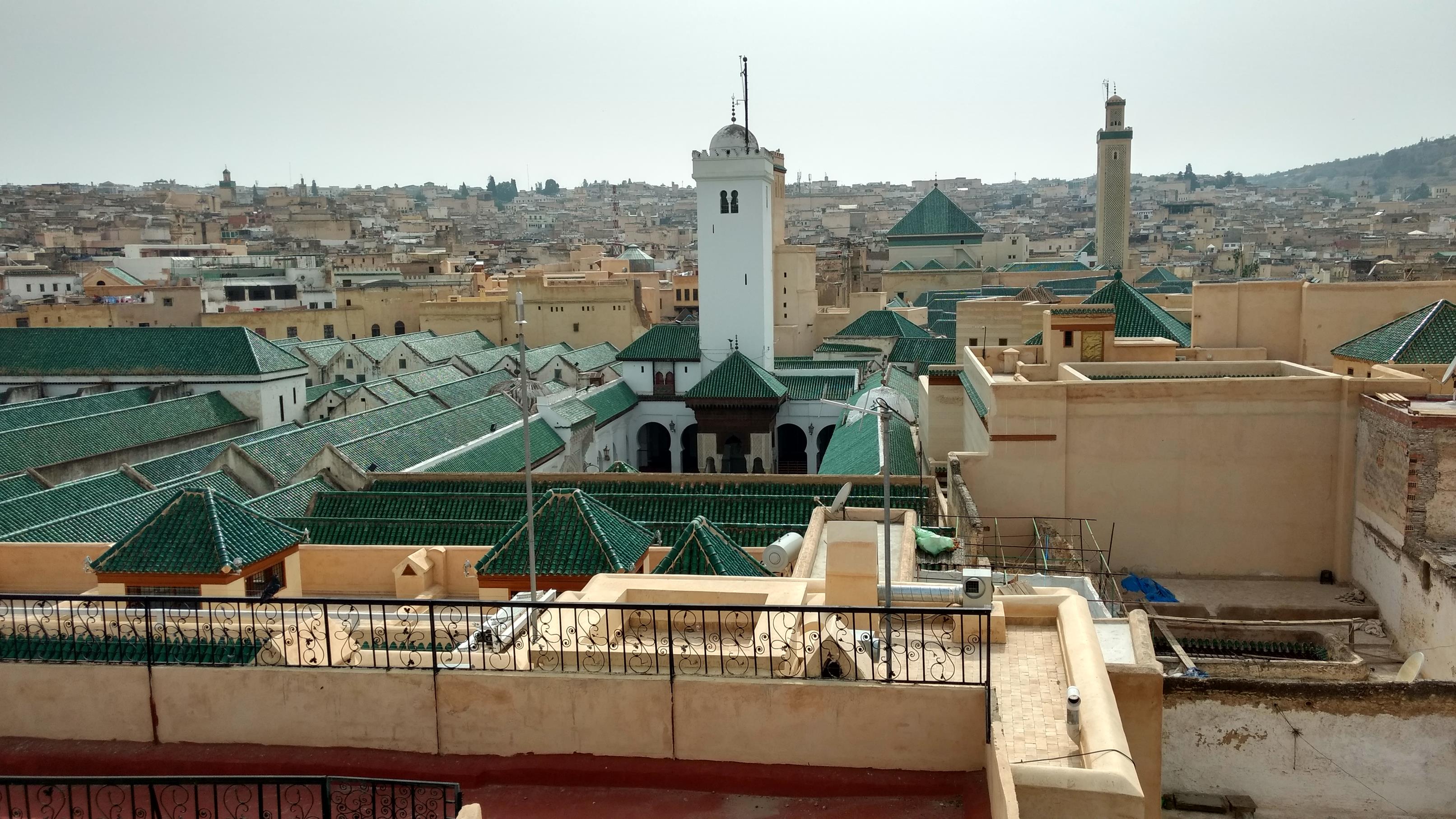 A good experience in Fes: he wanted to show us his handiwork and wanted to sell something, looked tense. We bought a necklace and saw him at a pharmacy a few minutes later, spending the money 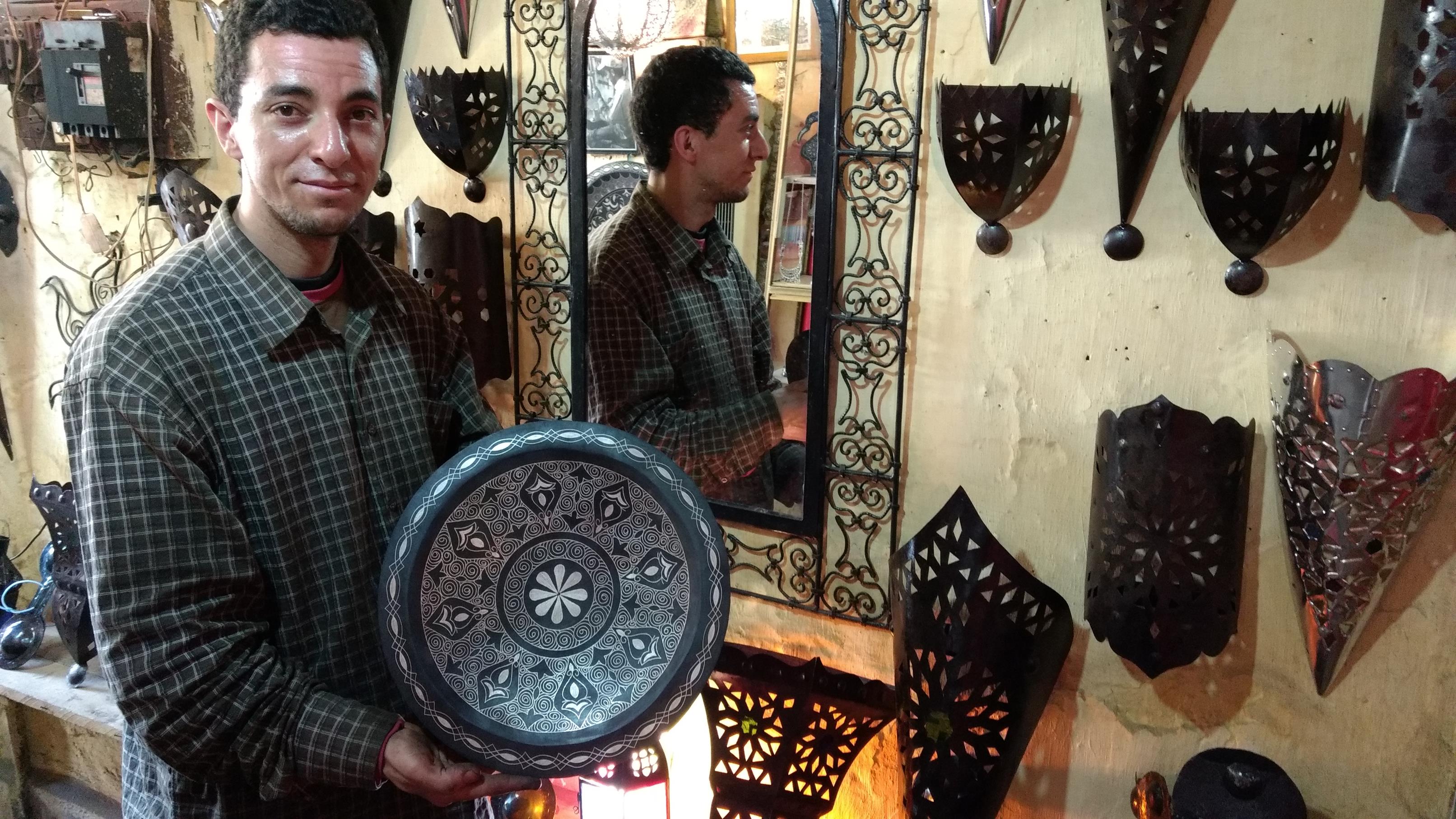 As soon as we said goodbye to the locals, things went south pretty fast. I felt like free game to the citys countless rip-offs. Under the pretext of helping us – as we were used to from everywhere else – they showed us the way to our hostel – for a small donation of money, of course. Only after the guy left, we found out, that they had misled us even further. A few meters down the road, the same kind of Moroccan was waiting for us. This happened often and was so frustrating, I started to get aggressive and almost got in a fight with a wrong guide. 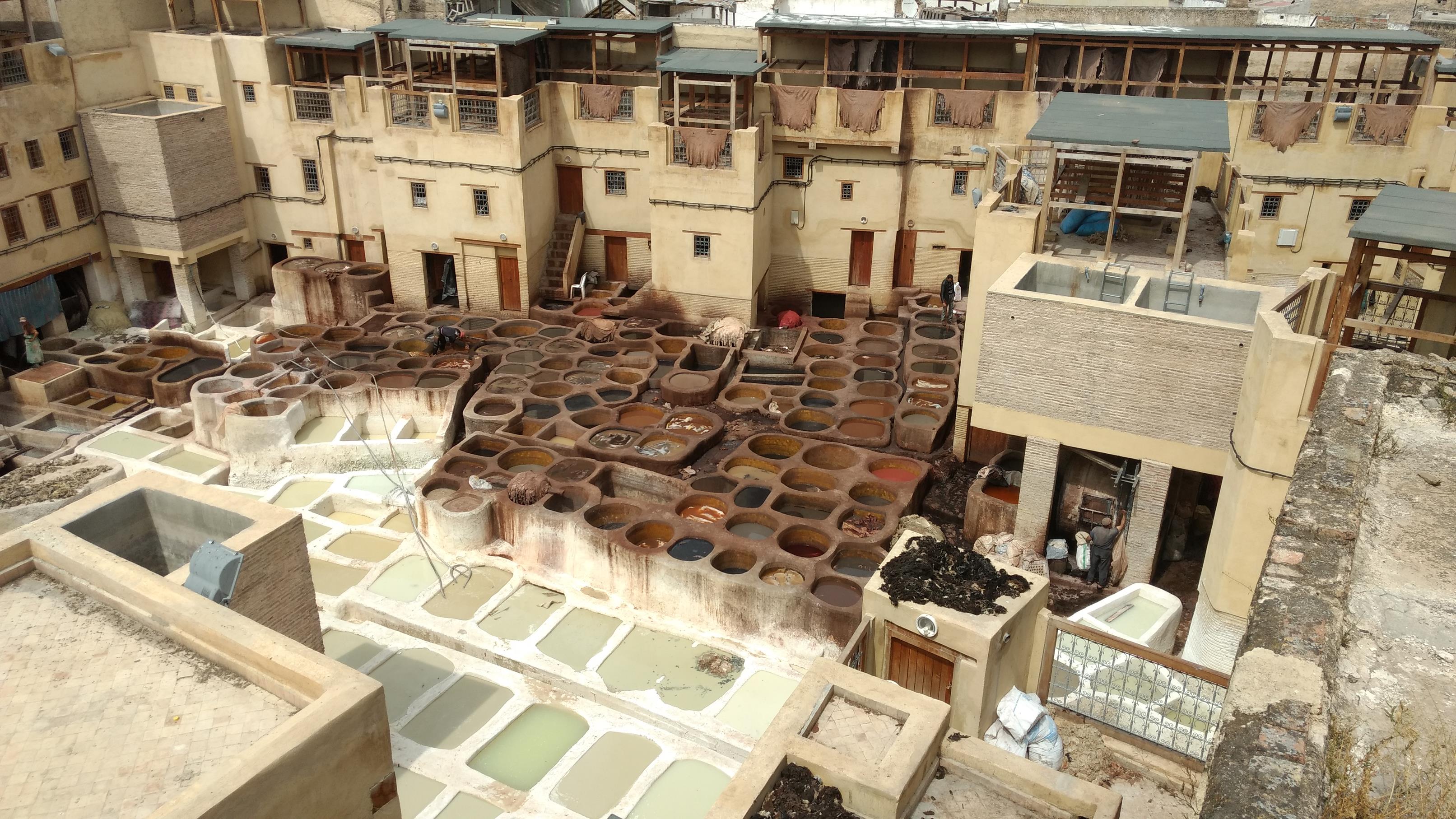 Our accommodation was far away from everything (5 euro per night/person) and located in a family´s home on the third floor (the toilet on the ground floor). It was anything but well-chosen. On Friday, we were invited to eat couscous – of course free of charge, we were assured. After the meal, the woman asked for 8 euros for our meal – which I gladly paid, although it was not necessarily cheap for couscous. It was disillusioning, when at half past eleven in the evening someone knocked on our door and the head of the family (obviously drunk) explained that it was 8 euros per person – and he wanted more money. Perplexed as I was, I also paid for that – in retrospect I should have held firm. Apart from that, it was the worst lodging of all – neither the location, the shower nor the beds were okay. I’ve never seen a bummer like this before.

Donkey parking lot on the edge of the medina 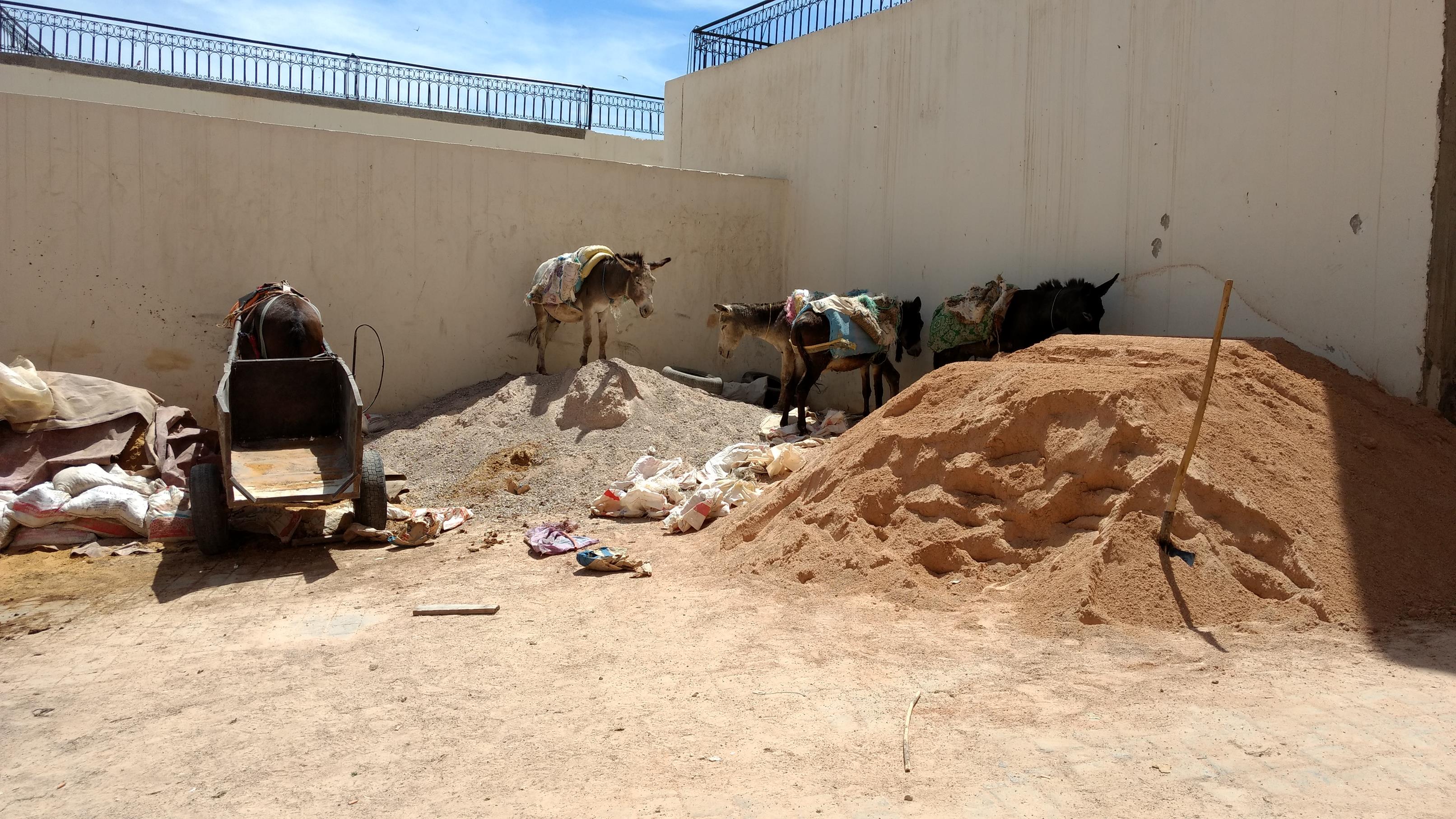 At the souk in Fes 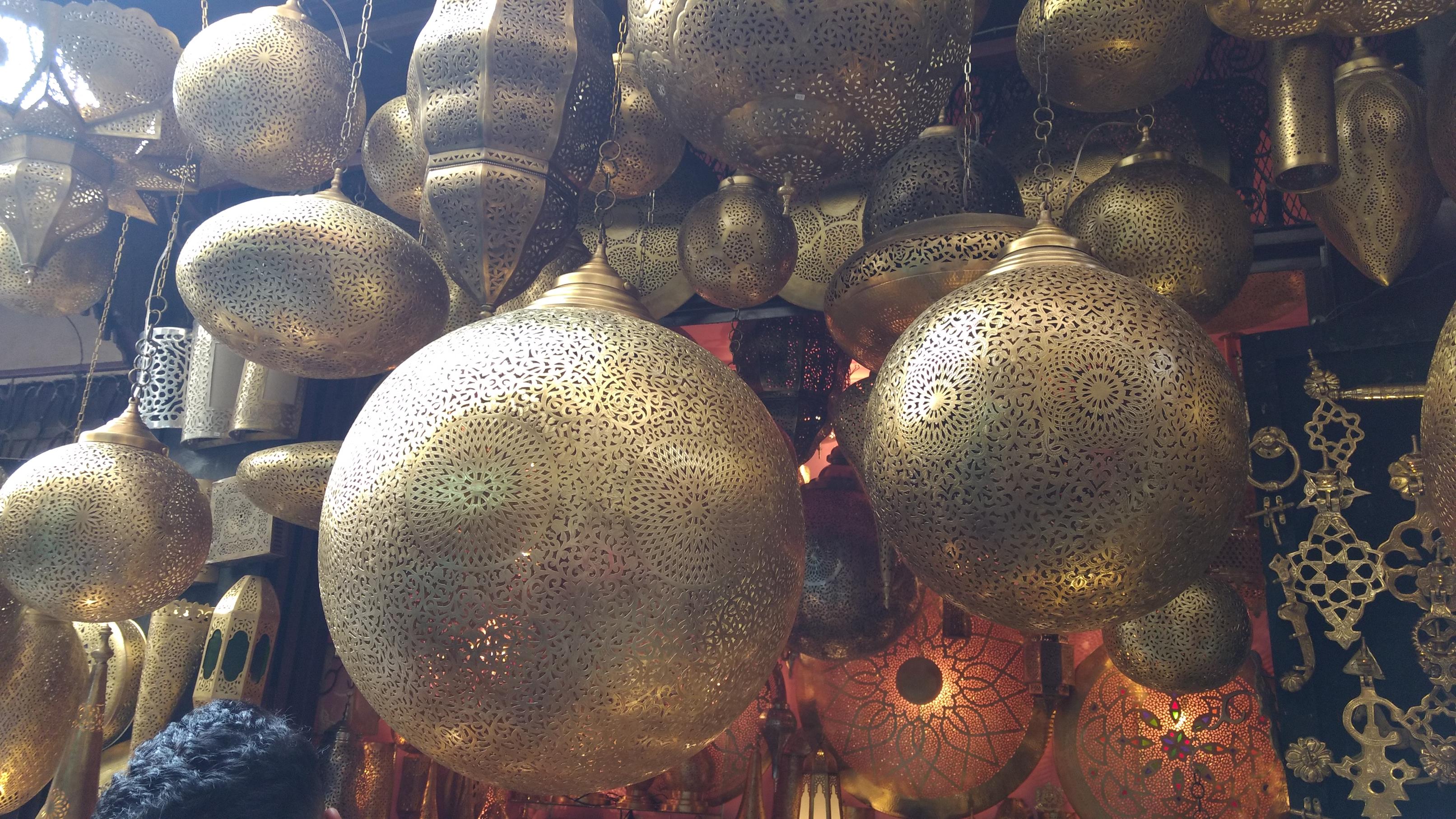 The above described incidents ruined Fez for Tes and me. Above all, it didn’t end there. For a free (!) guided tour of the tannery (Fez is famous for it), they asked for ten euros per person afterwards. I did not pay but started to discuss loudly. A passing local even agreed with me and supported me. By the way, the town stinks because of the tannery and the smell of garbage and sewage even adds up to this – I never want to go there again!

Entrance to the medina in Fes 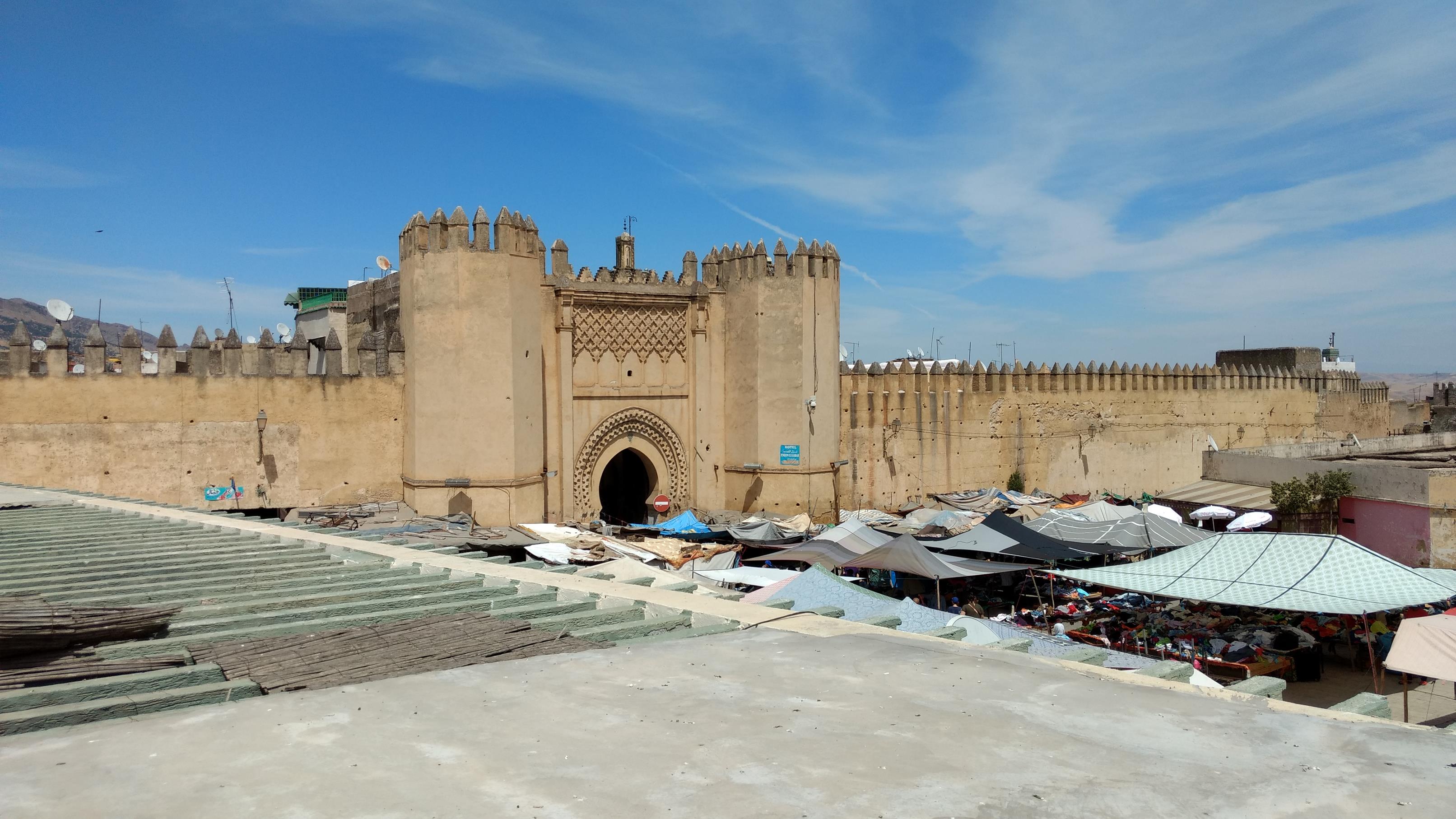 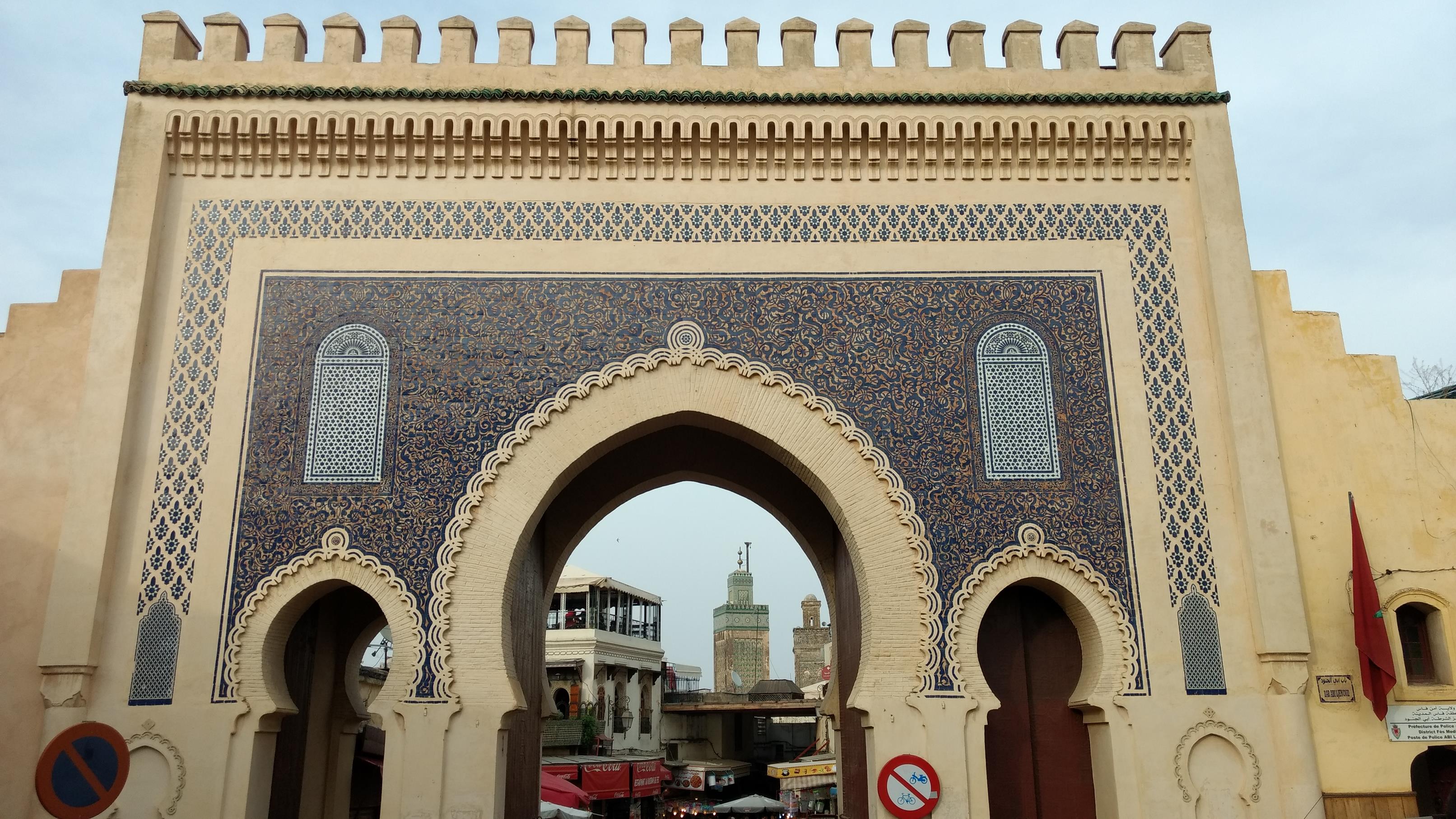 The pictures of Fez I uploaded are nice – but the behavior of the locals in contact with tourists is a disaster! If we had started our Morocco trip here – I would have booked a flight home straight away. Guided tours can be an alternative – after Fez we booked a tour to Merzouga, the Sahara desert and Marrakech. We were very satisfied with the provider “Jade Tour SARL” and you´ll find lots of beautiful pictures of the trip in the next article. 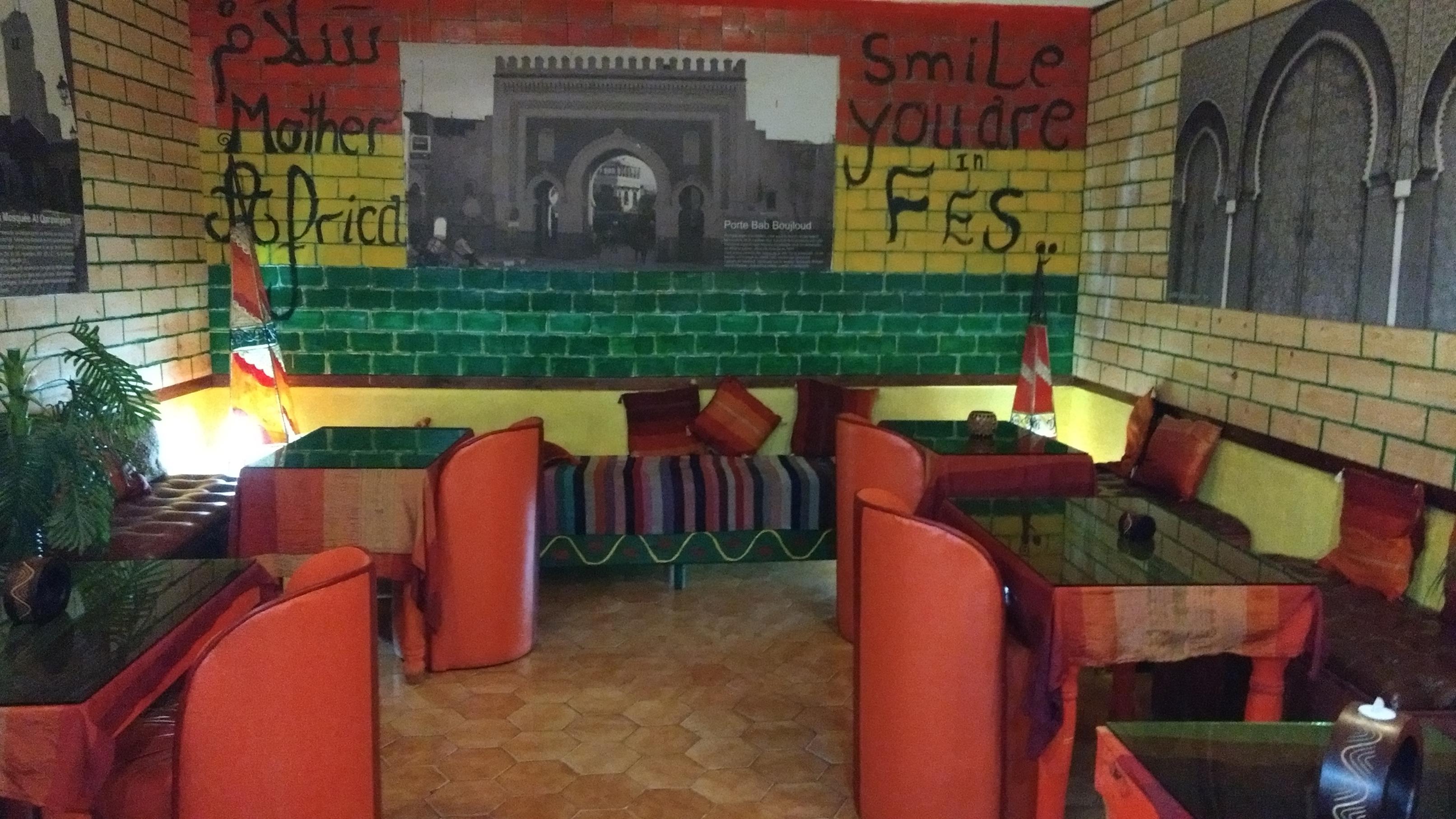 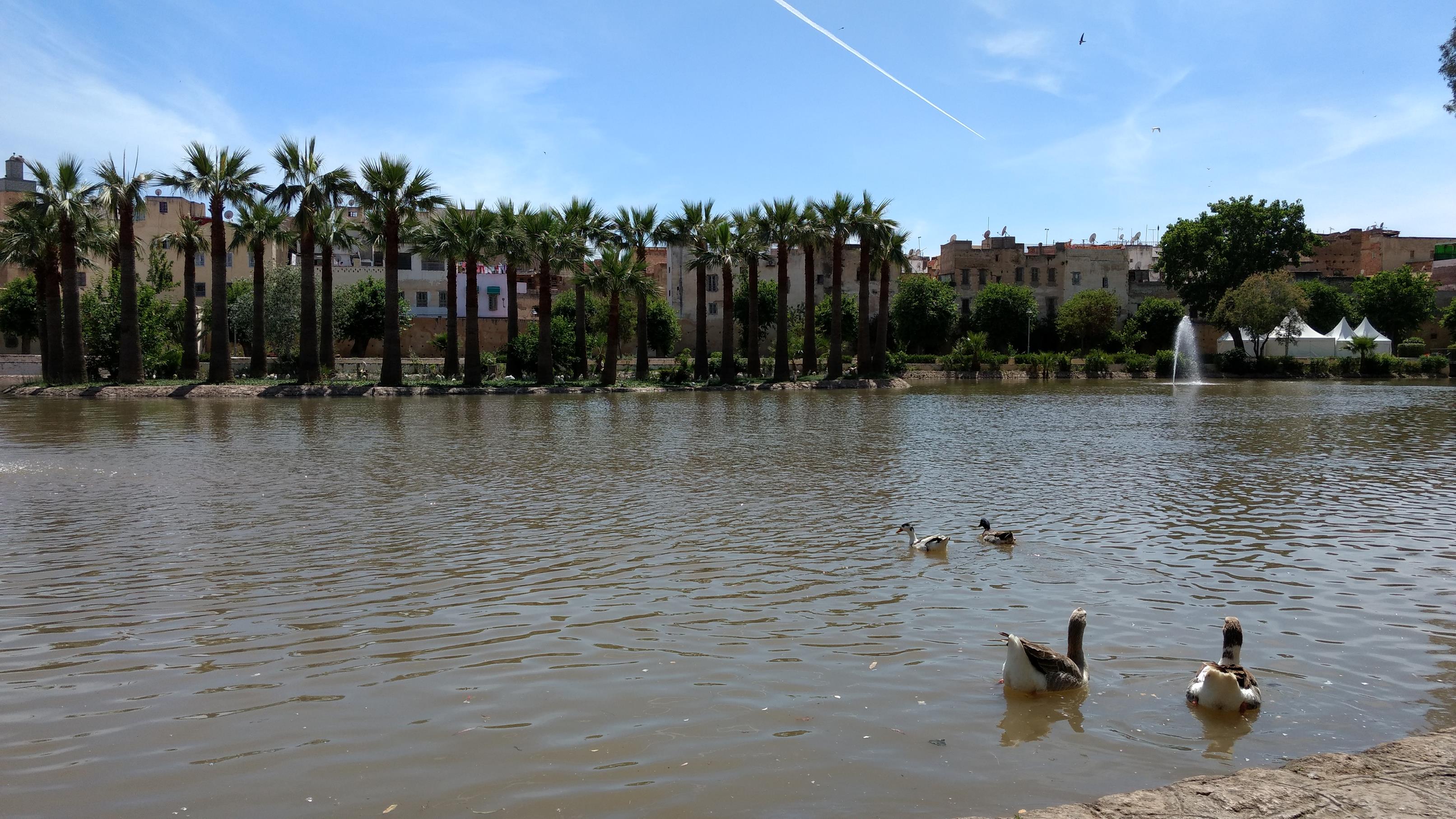