After arriving in Sighișoara in the evening, we put our luggage in our room and went on a discovery tour. The small city has almost 30,000 inhabitants and the city center is a UNESCO World Heritage Site. Strolling through the narrow, paved streets is definitely enough to fall in love with the city. 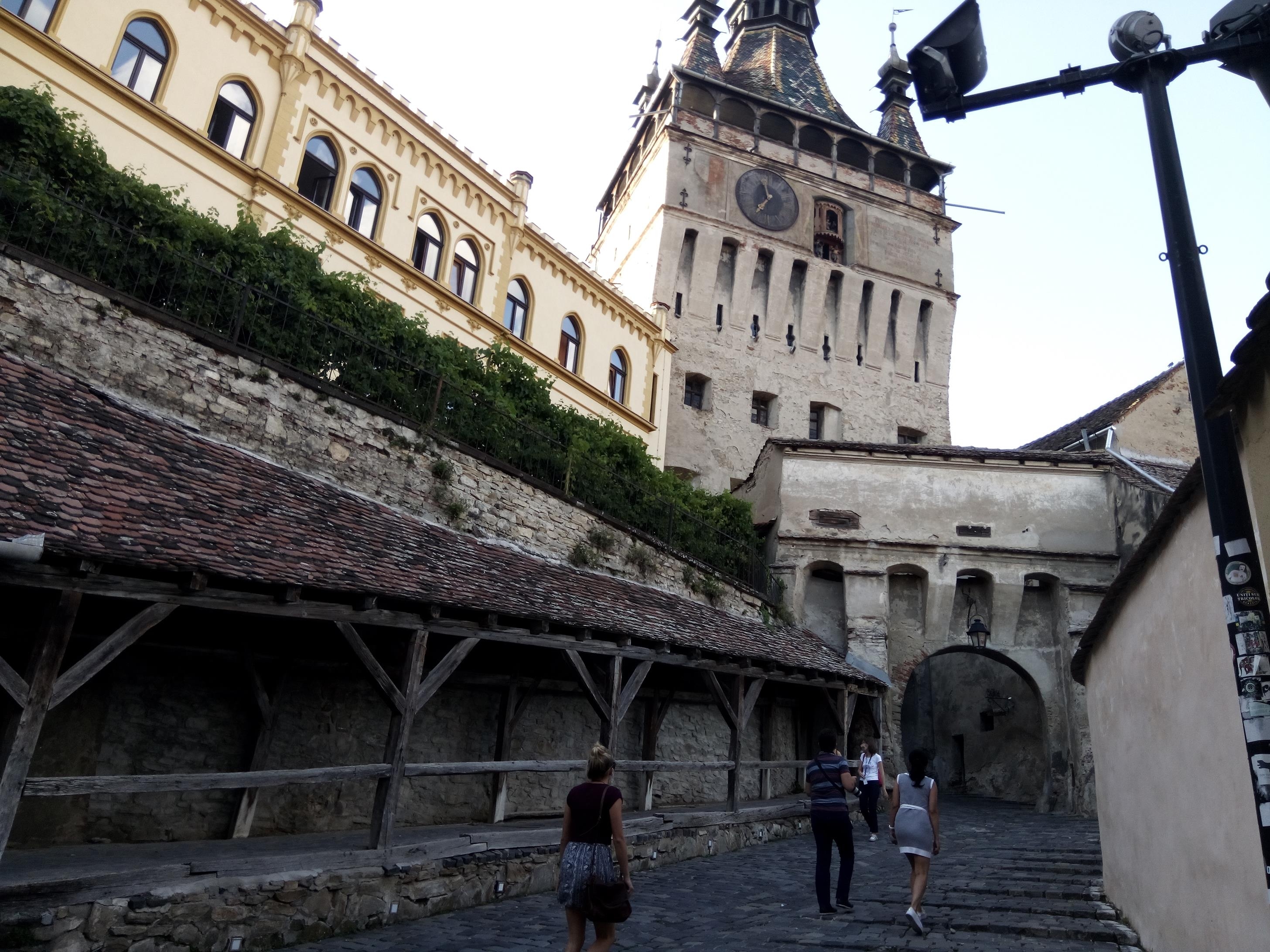 Especially at dusk, the town gives away a flair of Dracula and can creep you out easily. It is said that Vlad Tepes (actually Vlad III Draculea) was born in this city. Tepes is a posthumously given nickname and stands for his favorite way of torture: impaling. As history goes, he did not only like this kind of torture, but also took pleasure in mutilations, drowning, skinning and cooking his victims. He nailed peoples hats to their head or cooked the meat of their loved ones and served it for dinner. 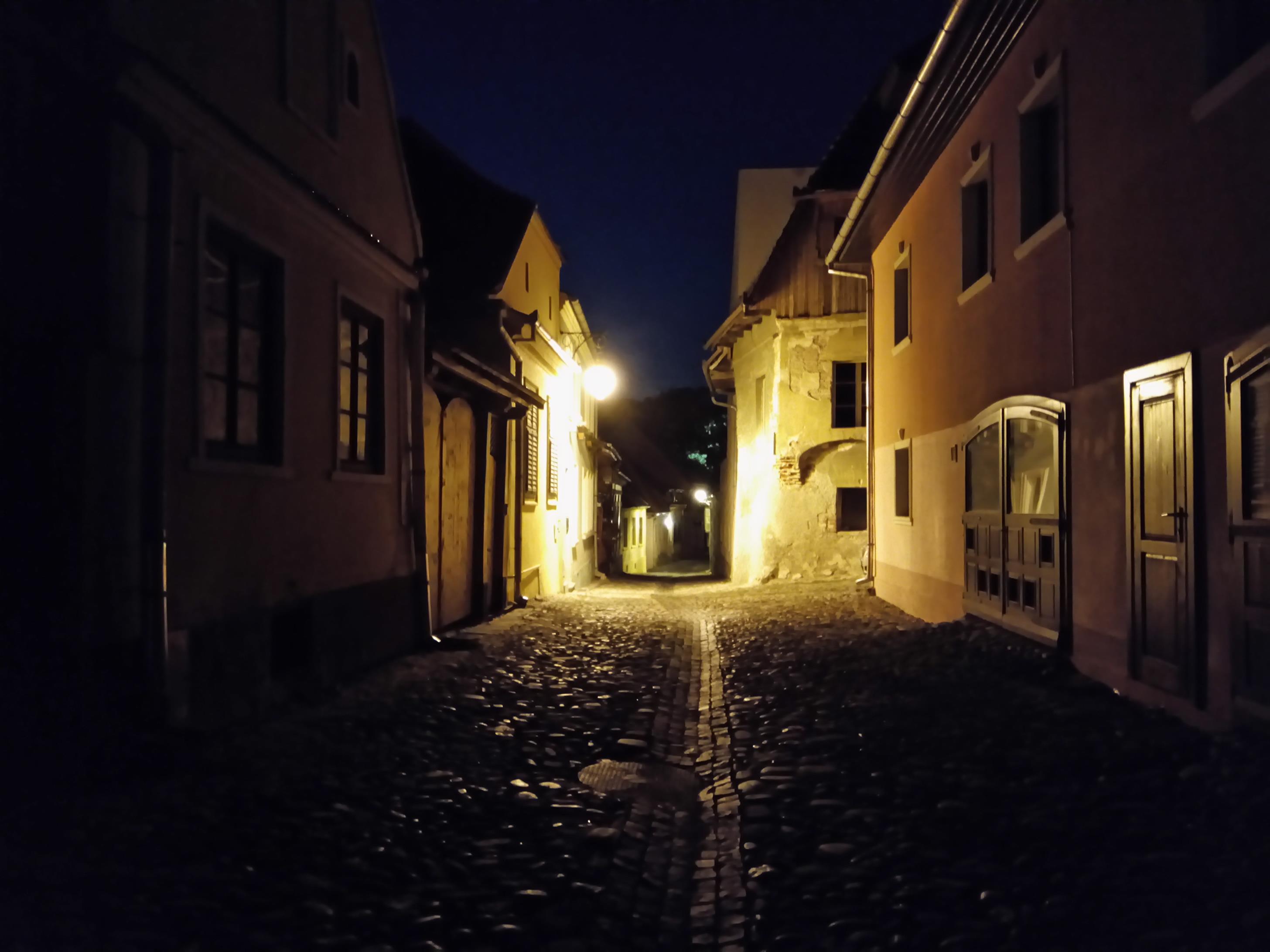 By the way, the name Draculea can mean two things: On one hand, his father was in the “Dragon Order” and the nickname could be translated as “Son of the Dragon”. On the other hand, the Romanian Draculea can also stand for “son of the devil”. 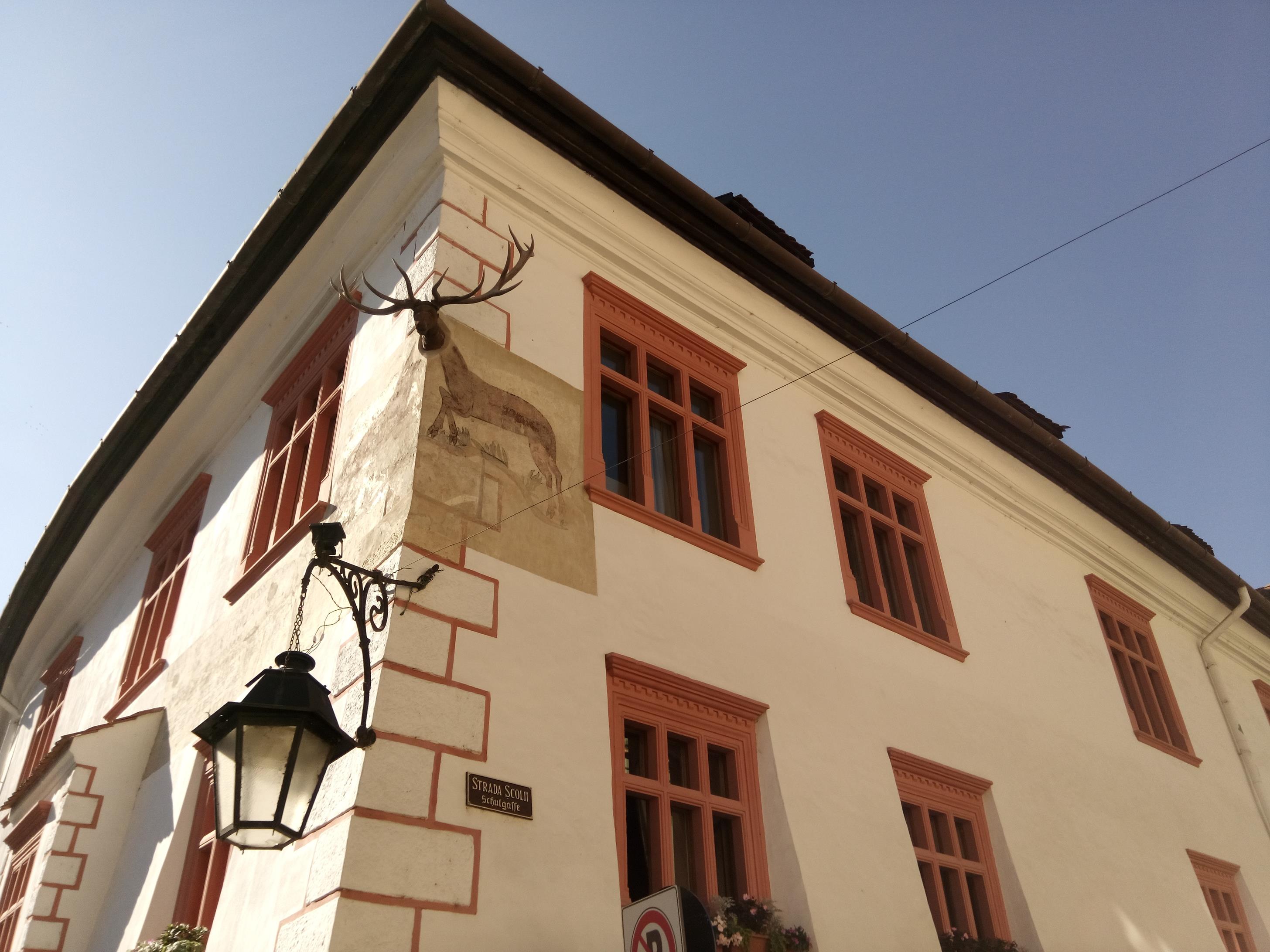 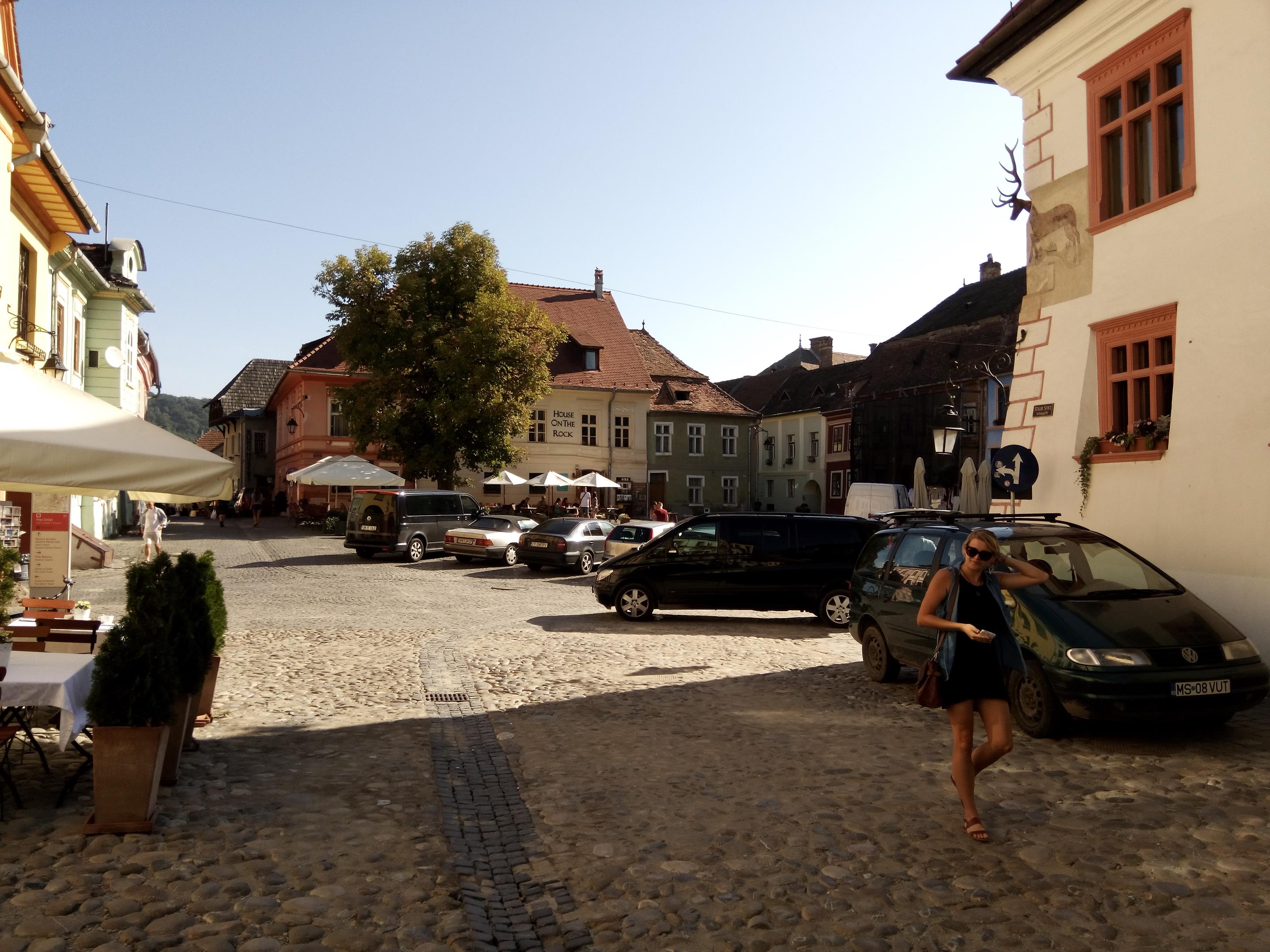 The town is trilingual and all signs are written in Romanian, Hungarian and German. There is still a German kindergarten and German schools and in my opinion, you shouldn’t miss the beautiful mountain cemetery.

This may be an extraordinary destination for a tourist, but gives a very extensive insight in the citys history. For countless centuries it was inhabited by mainly Germans and, despite the strong emigration, never lost its international flair. 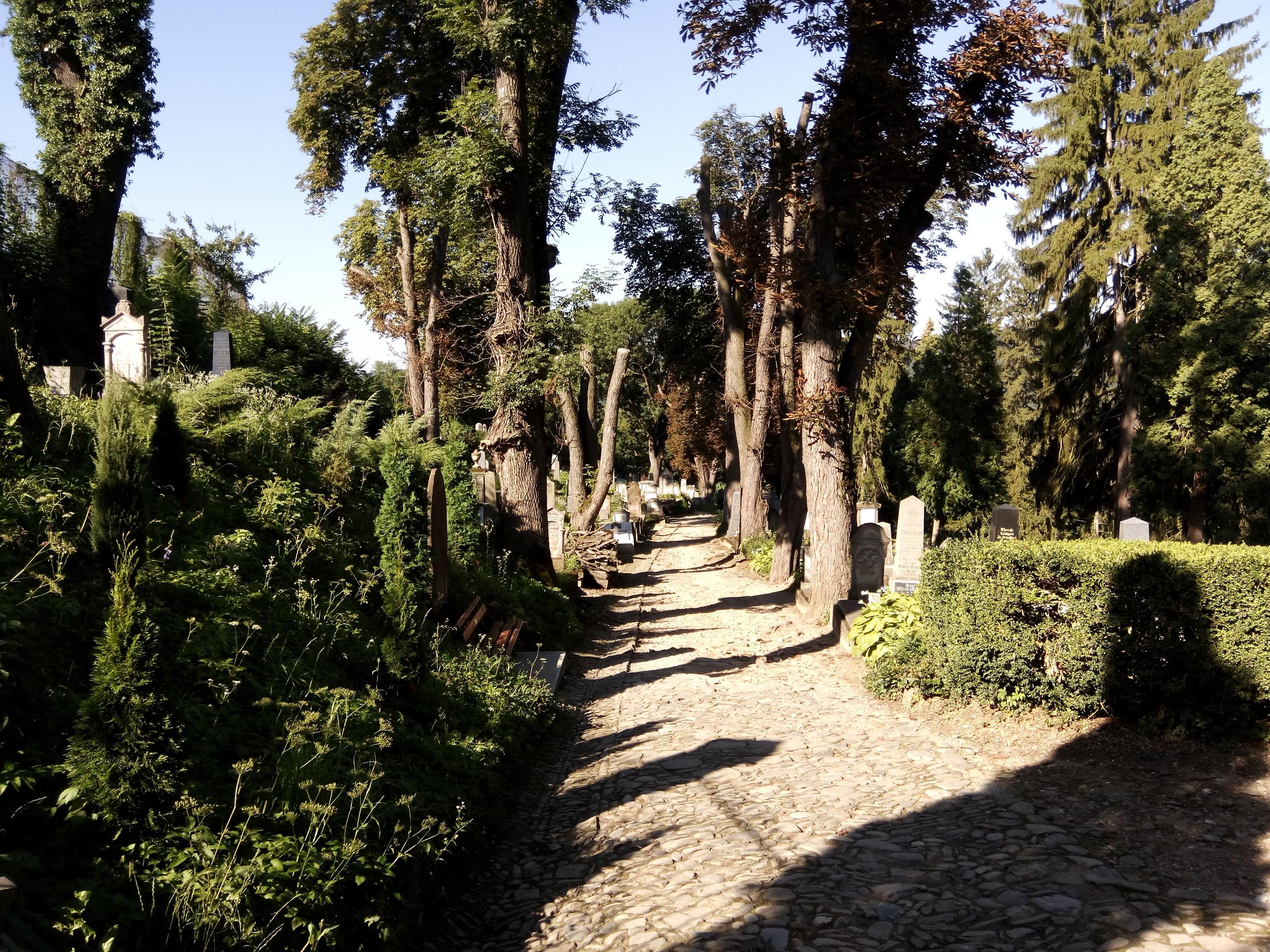 Apart from that, there is the “Turnul cu ceas” (Stundtower), some churches and the birthplace of Dracula. To me, the city is a top recommendation for a Romanian vacationer, as just the old town is worth spending at least a night! 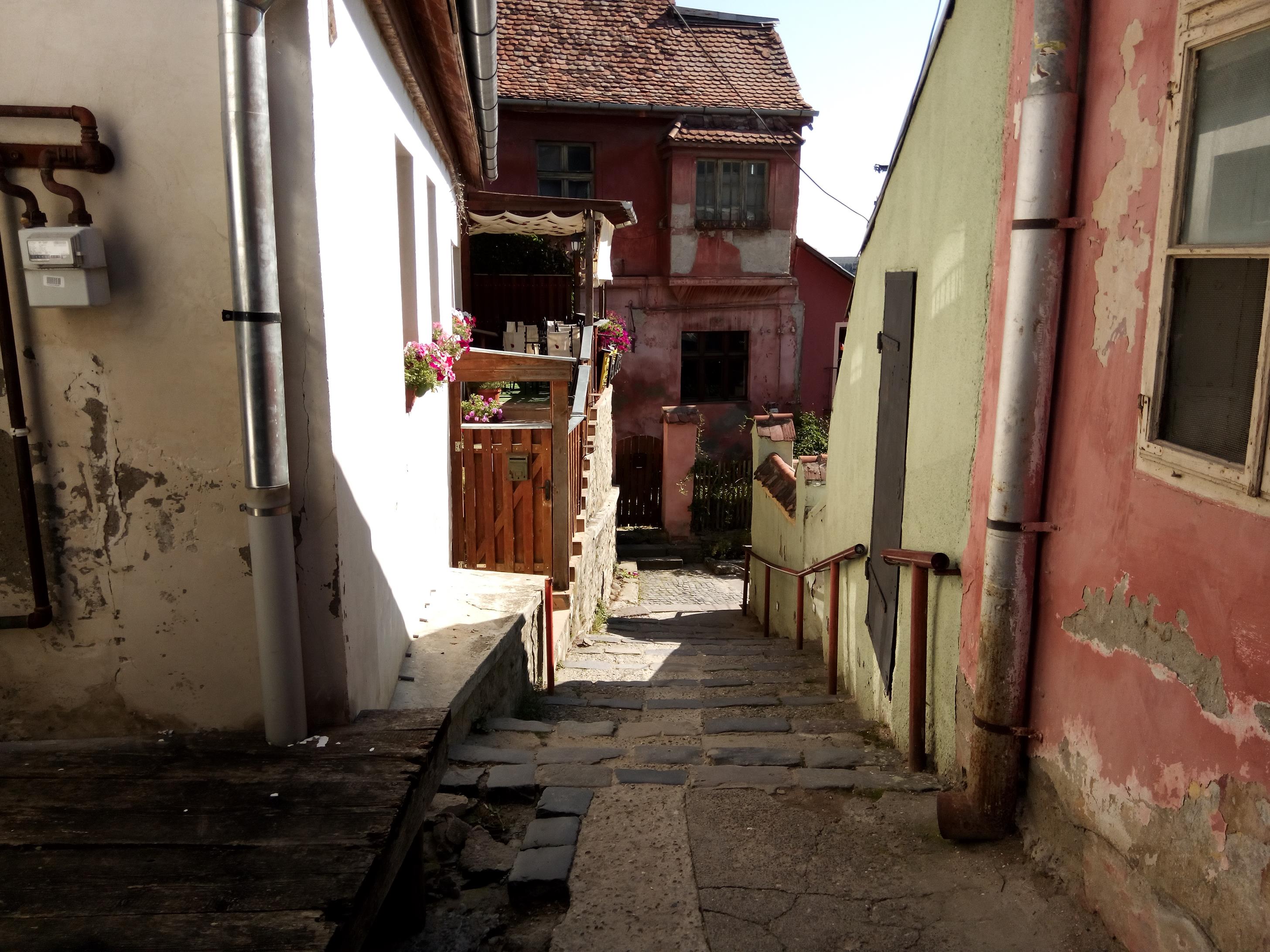 We only had one night in Sighisoara and went on towards Brasov. After about an hour’s drive you could see, as so often in Romania, an old castle ruin from far away already. As it was beautifully situated and easy to reach by car, we stopped spontaneously and started a short tour through the old walls. But first of all, here are some pictures: 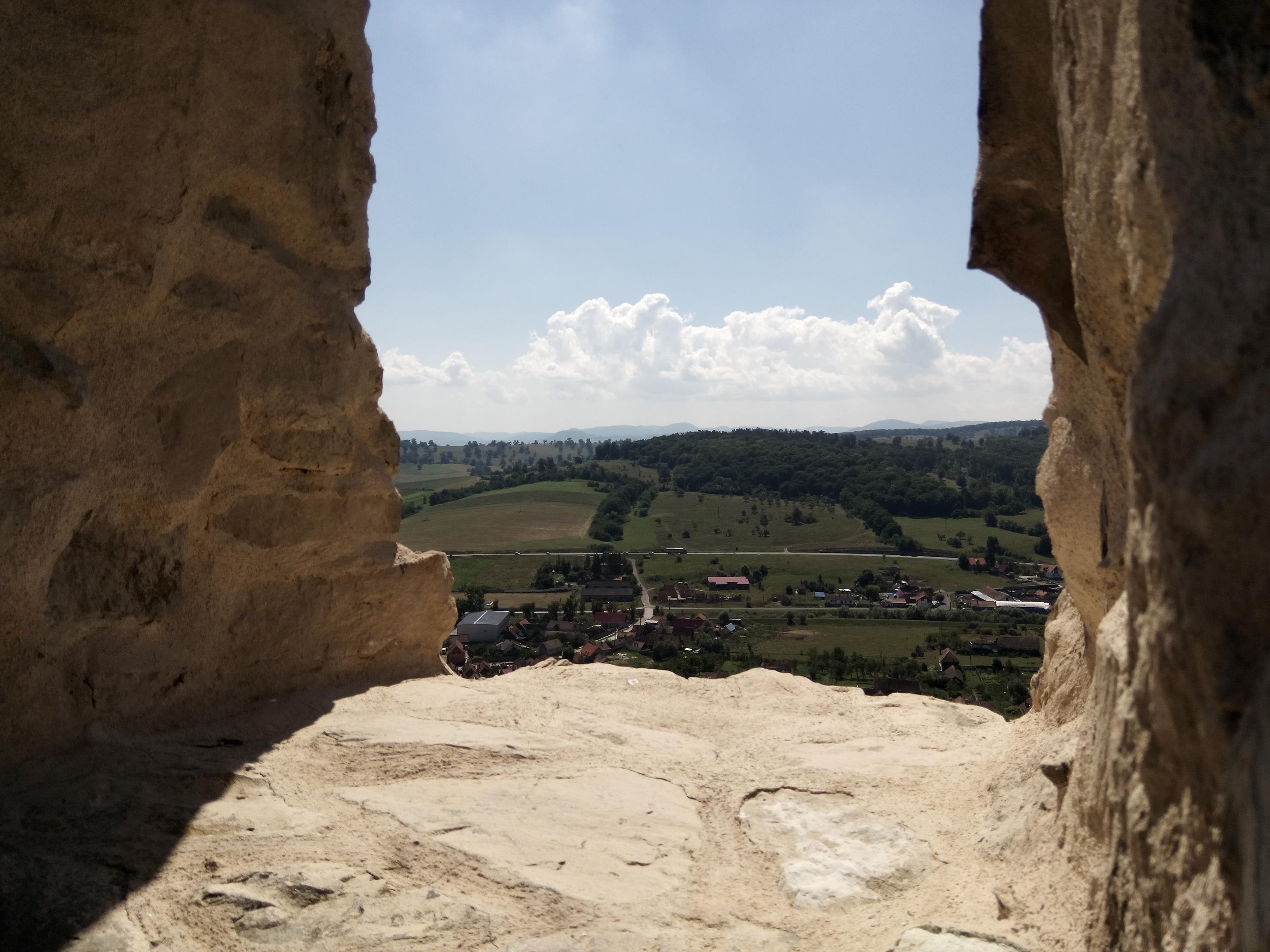 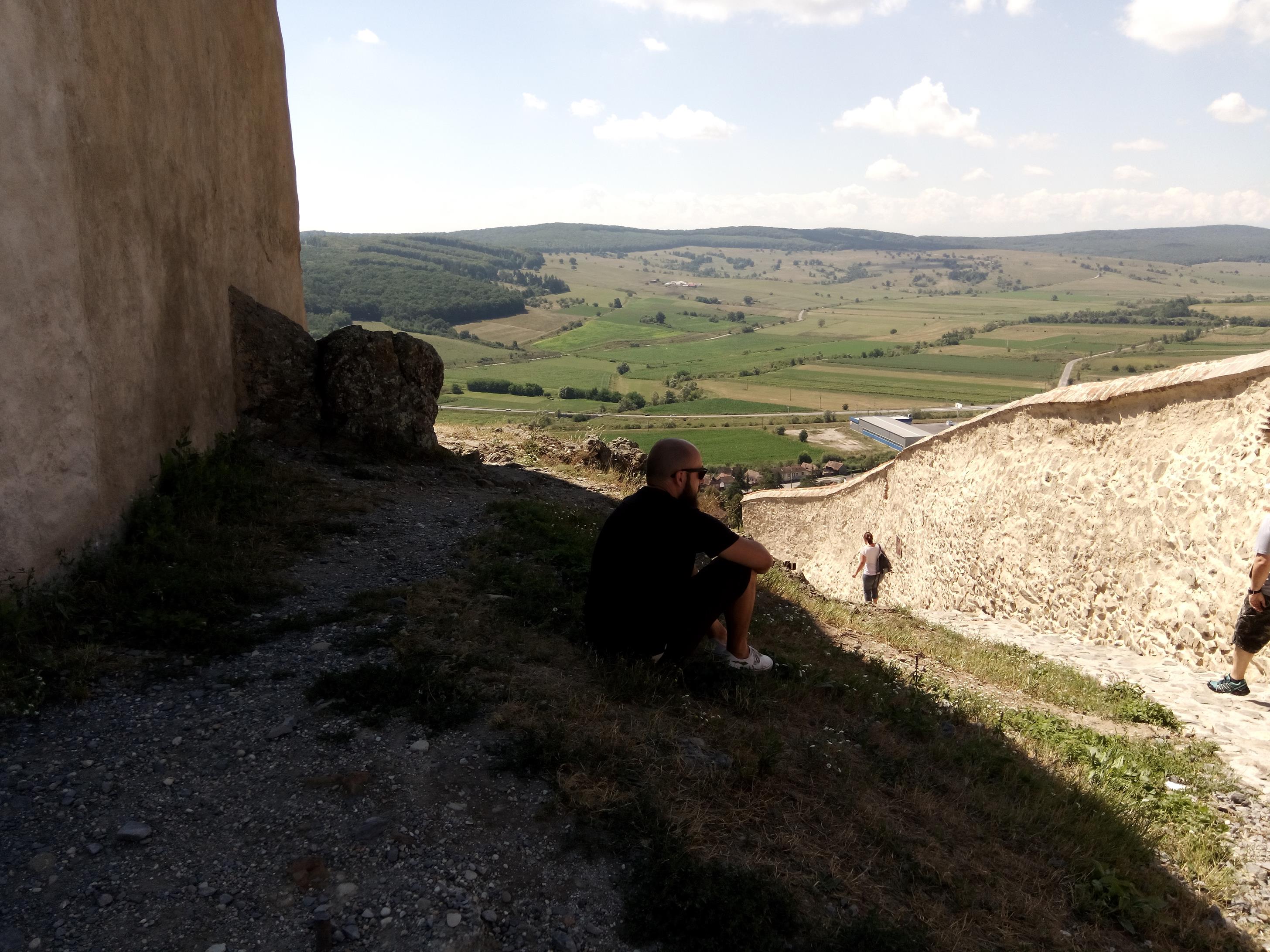 The castle is situated on a 120-meter-high hill and is well-developed for tourism. There are enough parking spaces available and the entrance fee was negligible. In the castle you can freely roam around and access a few rooms. The most beautiful thing about the castle is definitely the view of the surrounding countryside and the town of Reps at the foot of the hill. We spent about 1.5 hours in the ruin and were able to gain some impressions of life in the Middle Ages. Afterwards we drove another hour to reach our destination for the night: Brasov. 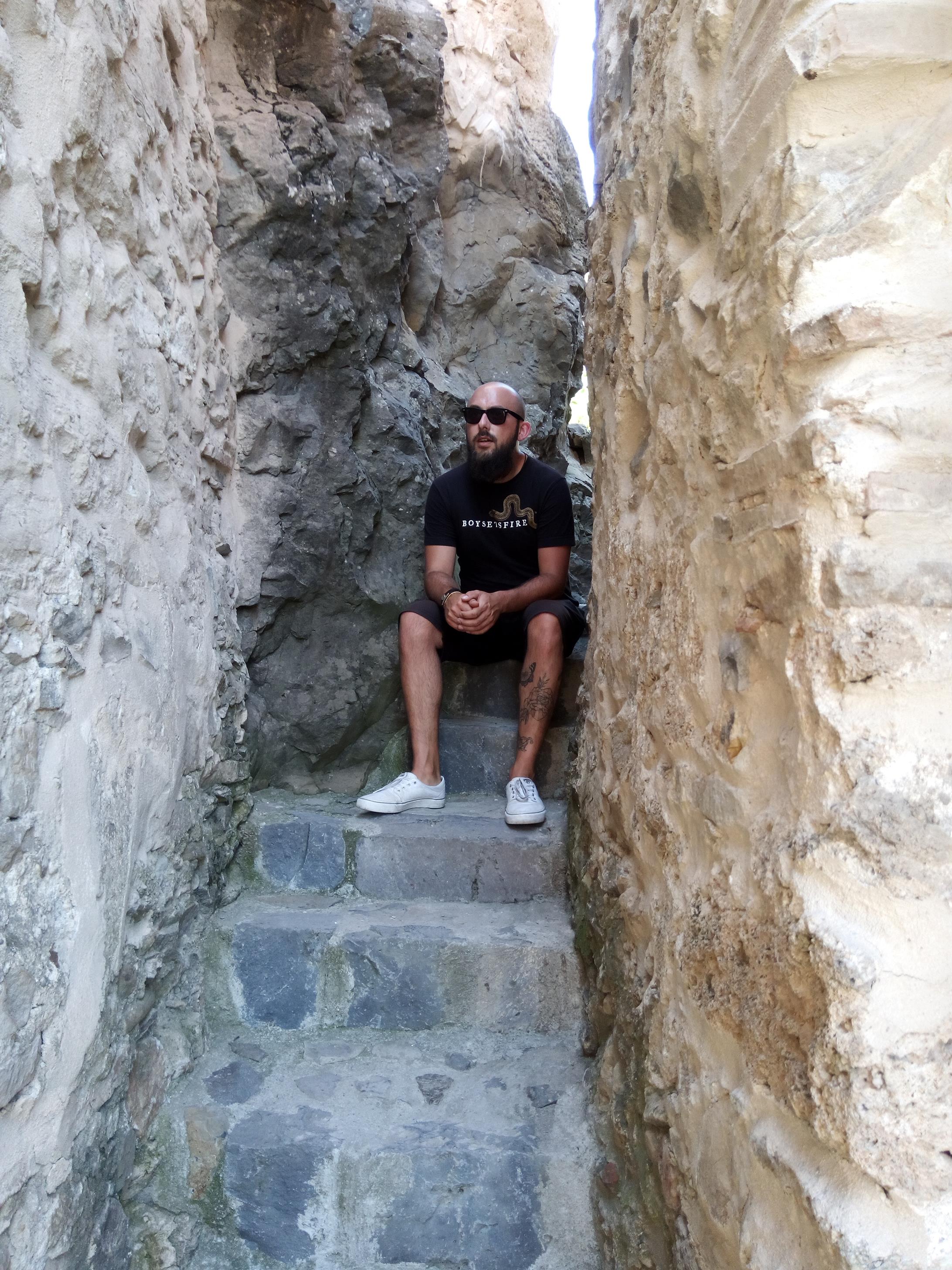 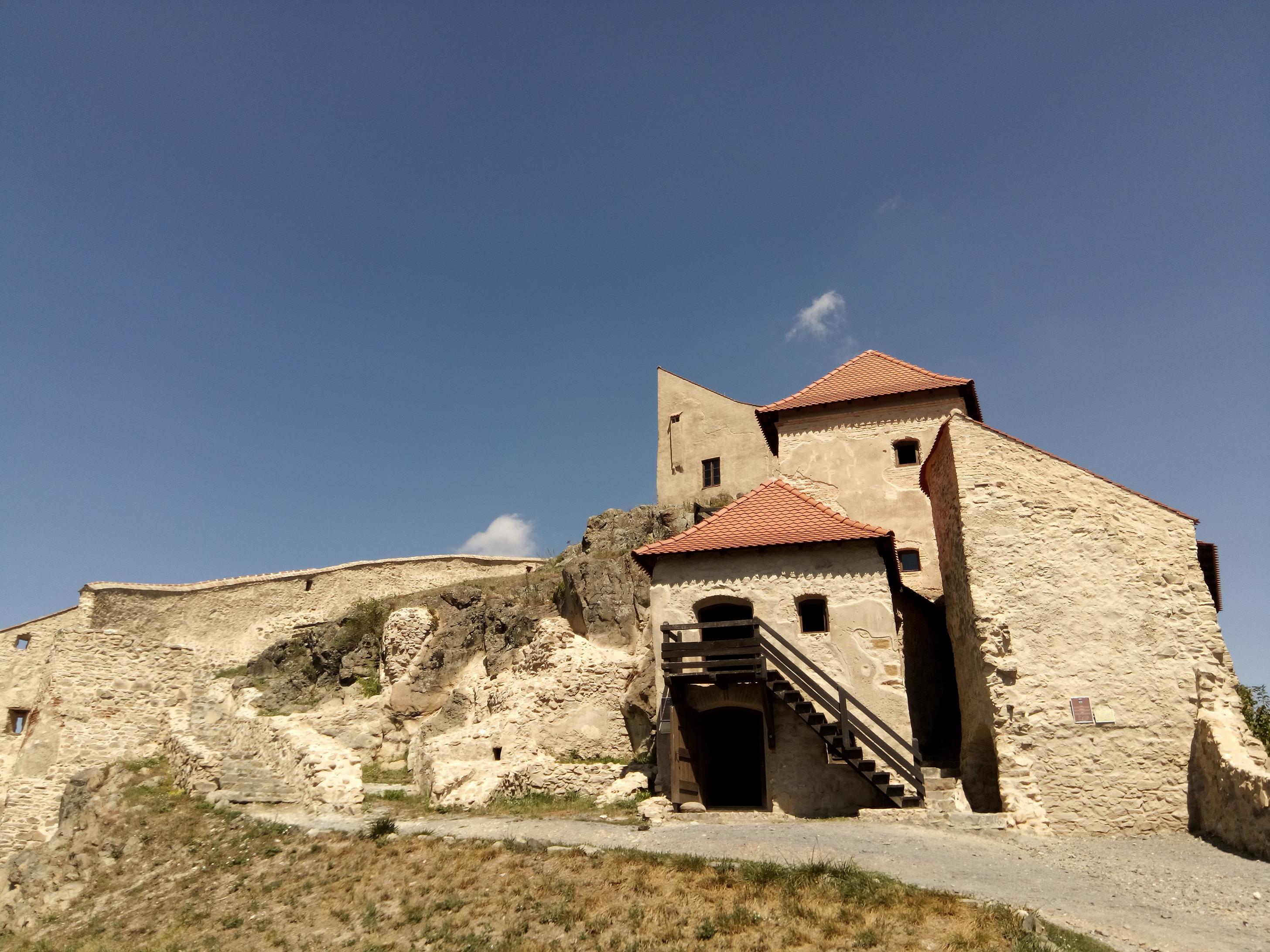 Brasov and the narrowest street in Europe

When we arrived in Brasov, we started searching for our hotel. Since we had to park a few minutes from the navigated destination and couldn’t find the hotel at first try, we walked along a very narrow alley. This alley later turned out to be the  Strada Sforii (String Street) and our hotel was right next to it. At its narrowest point, the street has a width of just 111 cm and its total length is about 80 meters. At that time I was cursing, because I could hardly pull my suitcase through the alley. I simply did not know that this was a tourist attraction and the narrowest street in Europe. 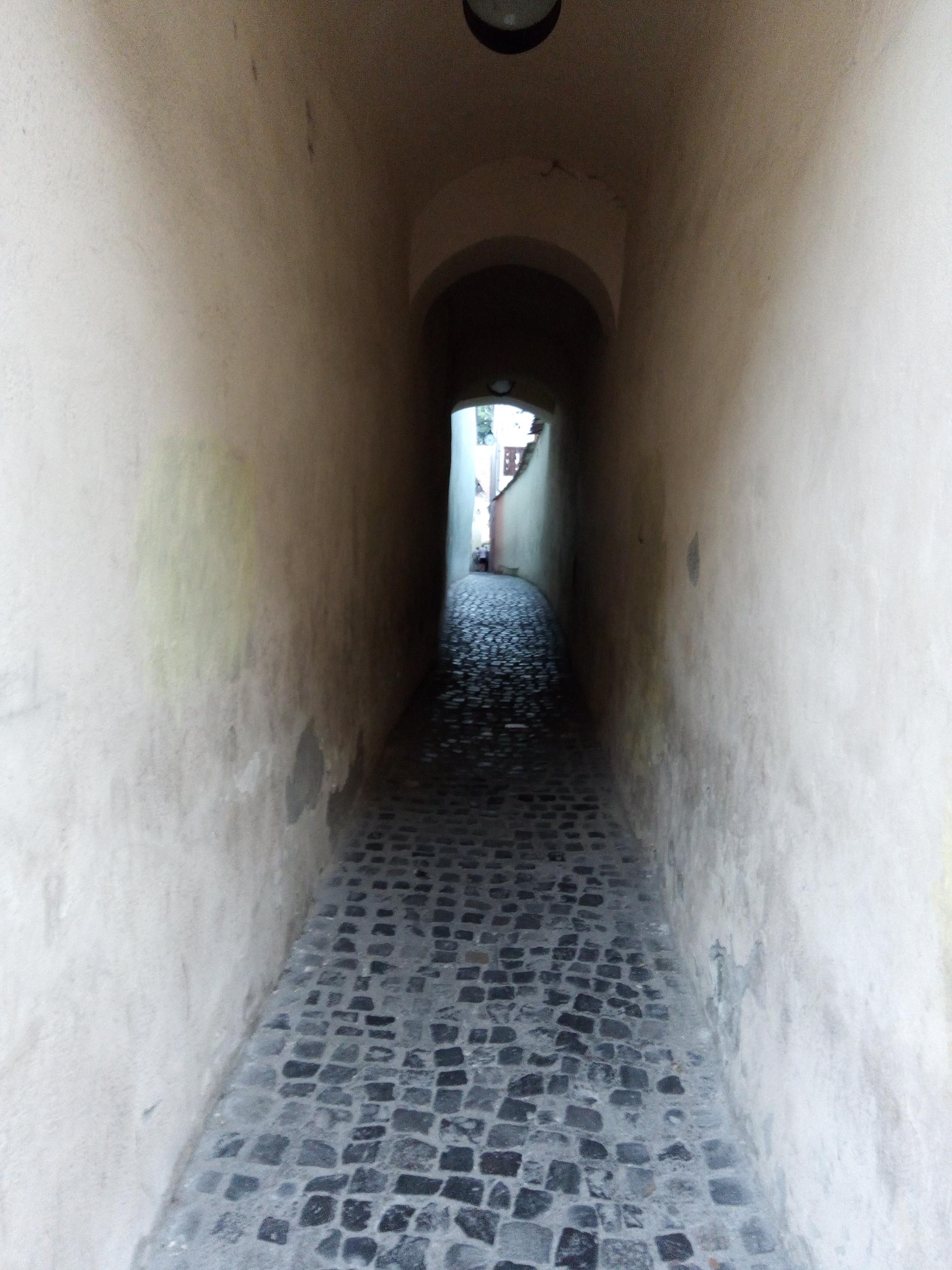 After we had left our suitcases in the room, we walked towards the old town and after a few meters encountered the Black Church. It is a huge building that was opened in 1542. The church owes its name to a fire several hundred years ago. Only the blackened walls and a fresco over the side entrance (the Black Madonna) survived, the rest was destroyed. 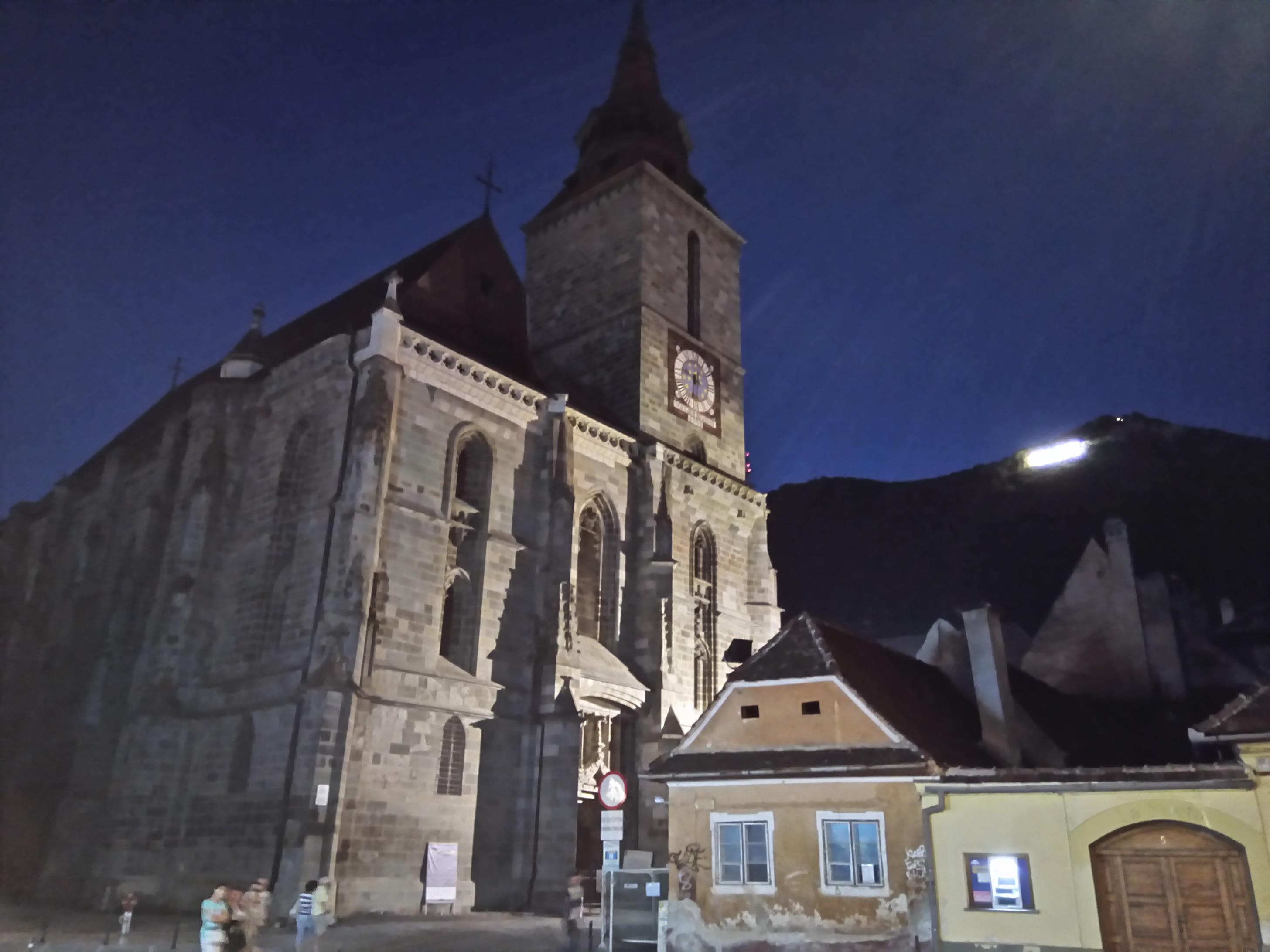 A walk through the church is recommended, unfortunately you are not allowed to take pictures. Inside, countless carpets hang from the walls, creating a rather unusual atmosphere for a church. There is also a huge wooden organ to visit, which alone is worth entering the church, as it is really huge. By the way, in the picture above you can see the “Hollywood sign” from Brasov glowing white. As with the American model, the name of the city is placed on top of a mountain. 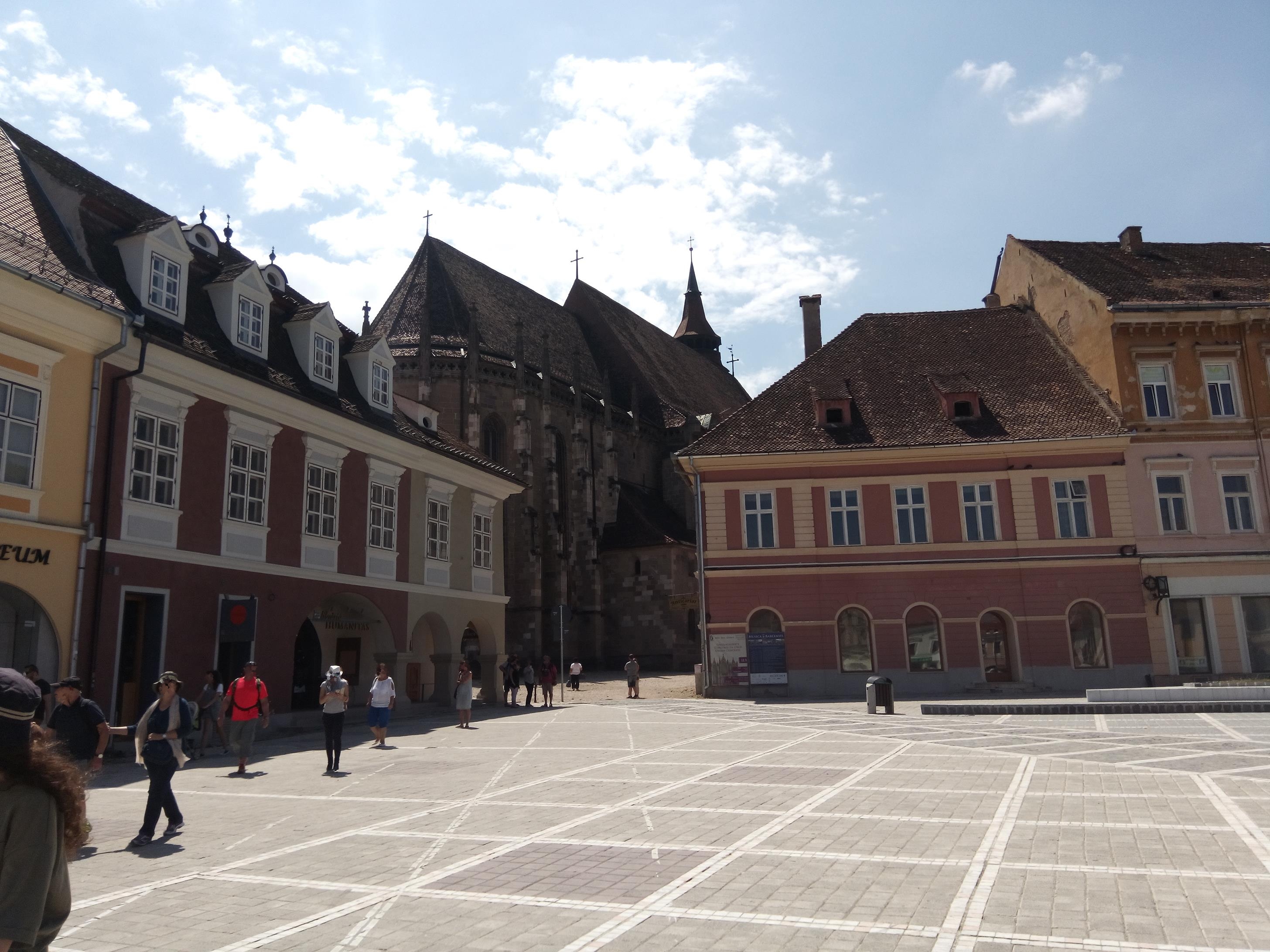 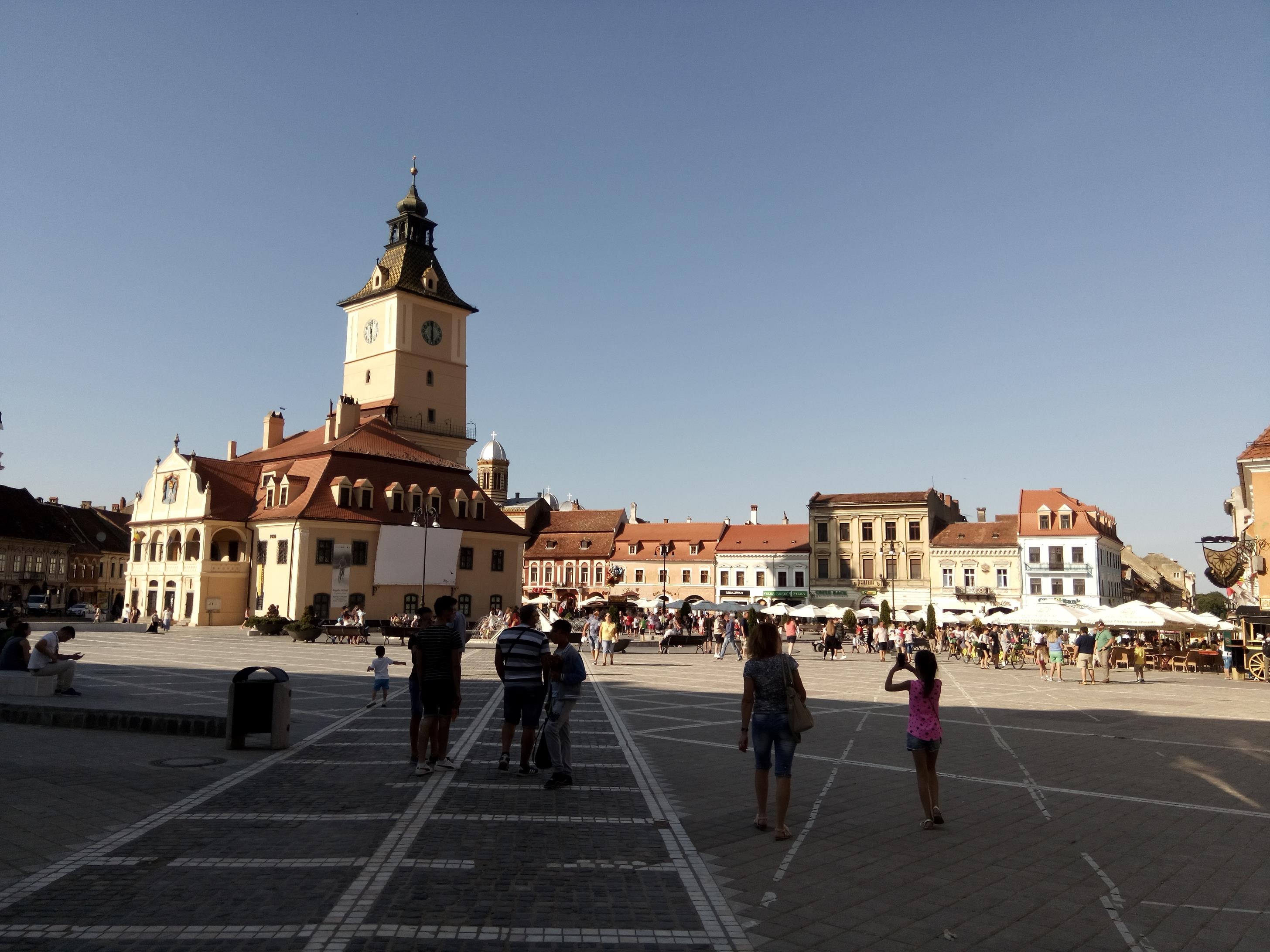 After visiting the church, we walked across the market square to the promenade. Like everywhere else in Romania, people were friendly, the food was cheap and tasty and you could easily get by using English.

Since all attractions were closed, we took a walk to a nearby forest at the city fringe and were rewarded with a beautiful view over the houses. Worth mentioning are the numerous signs, warning people of bears, wolves and other animals. For years, Brasov has been experiencing problems with bears coming to the city at night and living from trash cans.

After falling into bed in the evening and a good night sleep, we went for breakfast (for which we had to walk through the city for a long time; apparently people like to sleep in in Brasov). After eating, we continued our trip to Bran Castle, the gorgeous Transfagarasan and our next town: Sibiu.